Shaquille O’Neal, aka DJ Diesel, to be featured performer at Late Night in the Phog 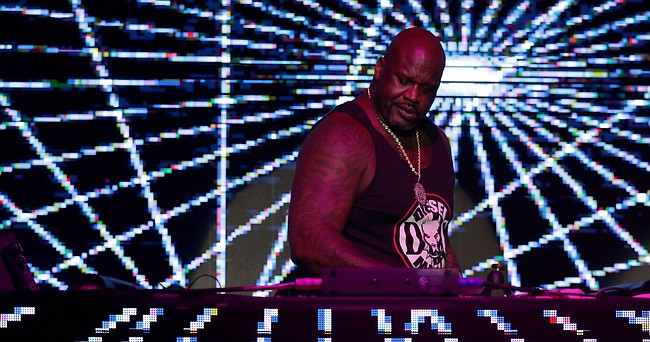 As if unveiling the newest championship banner and handing out NCAA title rings to the returning players was not big enough for this year’s Late Night in the Phog, Kansas Athletics has added a little more physical size to the event, as well.

NBA legend Shaquille O’Neal, now known as “DJ Diesel,” will be this year's featured performer, hosting what a KU news release called, “an energetic and fast-paced set on James Naismith Court in front of a frenzied Allen Fieldhouse crowd.”

The fun is slated for Friday, Oct. 14, when the KU men’s and women’s basketball teams will usher in the unofficial start of the 2022-23 season with scrimmages, skits and more.

During DJ Diesel’s performance, Allen Fieldhouse will be staged in a different manner than in the past, and other interactive entertainment will be featured during O’Neal’s set.

O’Neal began composing rap music in 1993. In addition to his Hall of Fame basketball career, during which he won four NBA titles and MVP honors in 2000, O’Neal has been featured in movies, on television, in video games and more.

This year’s event again will feature the Phog Fest on the front law of Allen Fieldhouse, beginning at 2 p.m. Students will be allowed to enter Allen Fieldhouse at 4:45 p.m., with gates for the general public opening at 5 p.m.

Admission to Late Night will continue to be free for fans, however, tickets will have to be claimed online in advance, with all seats outside of the student section being reserved.

A KU spokesperson told the Journal-World that the ticket office will contact each of the following groups during their reservation windows and that the general public can call the office or visit KUathletics.com.

Fans are once again encouraged to bring non-perishable food items which will be donated Just Food of Douglas County. Kansas Athletics will be collecting food and donations throughout the day.

This year’s Late Night in the Phog will be the 38th annual edition of the season tip-off and it is slated to begin at 6 p.m.

Do you know if it will once again be available for streaming on ESPN+ or another platform?

Nice to know KU is brining in a former LSU star to Late Night...

Was he an lsu star? Interesting perspective.

If we can hire an OSU alum, a tar heel, and another Tar Heel, we should be able to put up with a tiger in the Phog for an evening.

Besides, a couple decades in the nba would seem to trump what little time he spent in Baton Rouge.

Interestingly, Kansas and LSU met in the 1989-90 season when Shaq was in a Tigers uniform. KU beat #2-ranked LSU 89-83 in Baton Rouge in Shaq's second game with LSU in the quarterfinal round of the Preseason NIT en route to winning the entire tournament. Shaq fouled out of that game with 3:42 remaining. As a result of that and a win over #1 UNLV in the semifinals, KU, picked to finish sixth in the Big Eight, rocketed to #4 in the AP poll after not getting any votes in the poll to start the season.

Too commercial - bring back Snoop Dogg and the pole dancers!

That was Coach Williams’ 2nd year at KU after the post-championship ban. It was a record for largest unranked to ranked jump after beating the 2nd, 1st, and 25th ranked teams. We remained in the top two for the remainder of the regular season, and was the beginning of the record 31 consecutive NCAA tournament appearances that as of the 2022 tournament. That was also the year of the 150–95 victory over Kentucky, the worst defeat in Kentucky's history.

my favorite Shaq track. Sadly, now it doesn't conform to the current thing. I'm sure it's been cancelled since Kobe's retirement and untimely passing.

Shaq! The players will love it, and having him just might help us snag a couple recruits that come to Late Night! Really Smart move! Rock Chalk!

The players and recruits probably know Shaq more for his role with the NBA on TNT than for his actually NBA Hall of Fame career (let alone his college days at LSU). To the kids today he probably is an artifact from the age of physical big men who didn't have to be able to shoot. They wouldn't remember him as one of the 2 or 3 most dominant players in the NBA from around 1995 until around 2003. He was a force of nature, but he's really become way more famous as a studio TV host. I love watching him and Barkley going after eachother on set. Also Shaqtin' a Fool is immensely popular.

Lol this article makes it seem like he will be playing rap and hip-hop, even more so because Late Night has always had rappers in recent years. Nope - DJ Diesel plays SUPER heavy dubstep and bass music. I think most of the crowd will be in for a rude awakening haha.

I think most of the crowd won't care at all and will just be pumped for Late Night in the Phog and for Shaq.

Some great comments here especially those History lessons from Dirk & Bryce ! Thanks for posting.

We went to the 1991 Final Four in Indianapolis, & Shaq was there, up in the nosebleed section next to ours. Wasn't quite so wide-body then...