By Nathan Swaffar, Special to the Journal-World 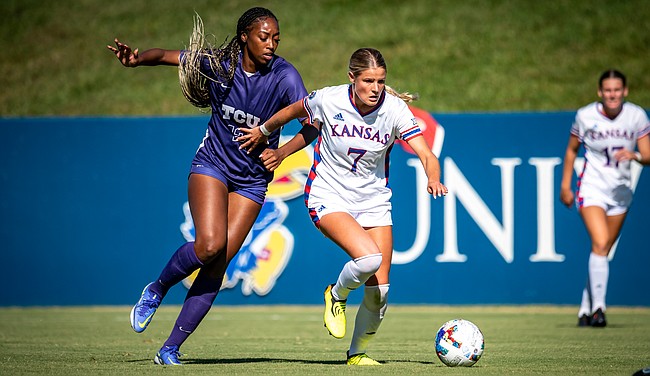 Sophomore midfielder Raena Childers (7) fights to push the ball up the field as a TCU player closes in during the Jayhawks' 1-0 loss to the Horned Frogs on Sunday, Sept. 25, 2022 at Rock Chalk Park.

Kansas lost 1-0 to No. 12 TCU on Sunday at Rock Chalk Park and fell to Oklahoma State 2-0 earlier in the week.

Through the Jayhawks’ first 12 games, there have been impressive moments and struggles.

KU (7-5 overall, 0-2 Big 12) started the season 5-2, but has lost three of its last four games, with two counting against their record in the conference standings. Despite the recent setbacks, KU coach Mark Francis said Sunday that he was pleased with the season overall and confident that his team will continue to grow through Big 12 play.

“The level that we're playing at is very, very good,” Francis said. “I think some of the best soccer we've played since I've been at Kansas. And I think the other part of it I would say is that, defensively, the kids are really bought in and committed to just making it difficult for the opponent.”

Francis’ pride in KU’s defense, which has limited opponents to 10 goals in 12 games, has been most pleasing to him thus far.

“Defensively, that's what it's about,” he said. “You're willing to do the work. You have a game plan, they can execute the game plan, but you’ve got to do the running and the guys are doing that and competing and really wanting it.”

Sophomore defender Makenzie Boeve echoed Francis’ comments about the defensive stability so far this season, but also emphasized the fact that the offense has to begin producing more goals going forward.

“I think we've done extremely well with just playing the ball around, switching it from side to side,” Boeve said. “We can continue growing and not being too urgent to go forward. At times, it seems like we're just stalling but really we're just passing and moving things in order to open up different spaces. And so I think, as a team, we've done that really well. I think we just need to convert on our chances that we are making because we are making opportunities. We just aren't able to get them in the back of the net.”

Despite the fact that KU finished with more shots on goal than the Horned Frogs — a feat they also accomplished in the loss to Oklahoma State — goals remained elusive and the Jayhawks went scoreless for the second straight game.

Francis was still pleased with the performance and gave credit to TCU.

“I thought we played really well,” he said. “Obviously, they're a very good team. They won the league the last few years. Preseason number one in the conference. We knew it'd be a tough game, but I thought the kids played great (and) competed really well. The game plan we had was really good defensively and made it difficult for them.”

Through the first 10 minutes, Kansas disrupted any flow TCU tried to create with a high press. That pressure led to the first shot of the game from the Jayhawks, when forward Lexi Watts fired a shot on target that forced a diving save by TCU goalkeeper Lauren Kellett.

The rest of the first half was uneventful. Although TCU primarily controlled the tempo and pace of the game, KU disrupted the Horned Frogs enough to prevent any prolonged and meaningful possession.

Out of the locker room, the Horned Frogs took control immediately. In the 47th minute, TCU opened the scoring off a shot from Gracia Brian to take a 1-0 lead.

Over the next 15 minutes, TCU continued to control pace and tempo, but the KU defense continued to bend and not break as the Horned Frogs pushed forward for a second goal. TCU nearly doubled its lead in the 68th minute when a cross off a free kick found the head of Grace Coppinger. But her shot was too high and skimmed the top of the net.

The Jayhawks nearly tallied the equalizer in the 75th minute when Avery Smith fired a strike on target that forced another diving save by Kellett.

KU pushed forward more as time slipped away with Francis pushing his wing-backs farther up the field, leaving three defenders on the backline. The Jayhawks almost scored again in the 83rd minute, when Rylan Childers headed the ball to the top right corner, but Kellett made a highlight-reel save to keep the Jayhawks’ off the scoreboard. .

“I honestly couldn't see it because of the sun,” Childers said. “I just jumped and it hit my head and it was going in. The keeper made a great save. (KU’s) Moira (Kelley) had a perfect ball. So, we wish that would have gone in.”

After two in a row on their home turf to open Big 12 play, the Jayhawks will head out on the road for three games in the next 14 days — at West Virginia, Baylor and Texas — before returning home to face Oklahoma on Oct. 13 at Rock Chalk Park.

So what this article is saying is much like every year under Francis?