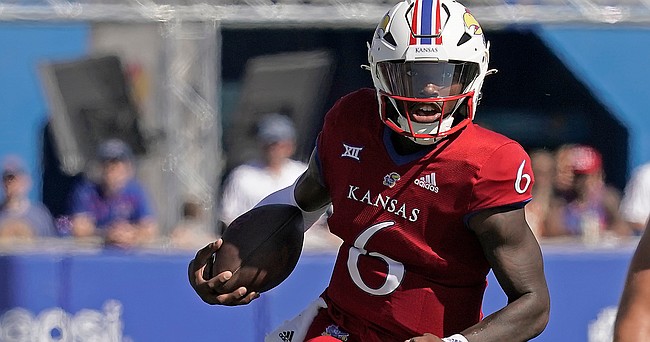 Jalon Daniels stood near the end zone staring at his right hand. The pinky unfurled first, then the ring finger, the middle and the index.

He was counting touchdown passes, but he might as well have been counting victories.

Kansas' junior quarterback threw for career highs of 324 yards and four touchdowns on Saturday in a 35-27 win against Duke in front of a sellout crowd at David Booth Kansas Memorial Stadium.

Daniels completed 19 of his 23 passes and ran 11 times for a team-high 87 yards and a touchdown as the Jayhawks improved to 4-0 for the first time since 2009. 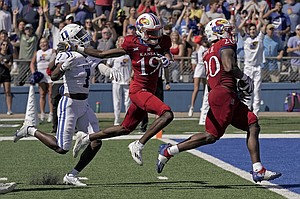 Redshirt sophomore running back Daniel Hishaw Jr. ran 10 times for 61 yards and caught a 73-yard touchdown pass, and Kansas withstood a late surge from Duke over the final five minutes to thrill the 47,233 fans, many of whom finally had a reason to stay in their seats.

Kansas generated 528 yards, including 204 on the ground and 329 by halftime. It held a 21-13 lead by the end of the second quarter and took a 15-point lead into the fourth quarter.

Duke, which fell to 3-1, went 70 yards in a penalty-assisted seven plays to score a touchdown with 2:40 remaining. The Jayhawks merely needed to run through the Blue Devils' three timeouts to end it, but they went three-and-out and gave their opponents the ball at the Duke 5-yard line with 2:15 remaining and a chance to tie it.

Unlike in recent weeks, when the Jayhawks started slow on the road and fell behind by 14 points, they didn't have a problem moving the ball or stopping their opponent. Their attempt to score on the first possession was halted by a failed fourth-and-goal conversion from the 1-yard line when sophomore running back Devin Neal's lunge for the goal line was ruled short. 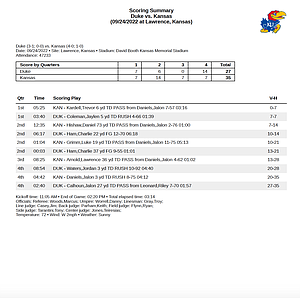 But Daniels got them going on their next drive by connecting with redshirt sophomore tight end Trevor Kardell on a 6-yard touchdown pass, then throwing another to the left flat to Hishaw, who rumbled 73 yards into the end zone early in the second quarter.

Daniels threw a third touchdown pass to junior wide receiver Luke Grimm on a back-shoulder fade with 1:04 to go in the second quarter and finished the half having completed 11 of 12 passes for 200 yards.

When he connected with redshirt sophomore wide receiver Lawrence Arnold on a 36-yard strike with 8:25 left in the third quarter, one which Arnold snagged at his knees to help put Kansas up 28-13, Daniels unleashed his four-finger celebration.

And on the next drive, with the Jayhawks stalled after a false start on fourth-and-2 from just inside opponent territory, Daniels did something unexpected. He dropped a pooch punt at Duke's 8-yard line that was downed by Arnold.

"He can run it. He can throw it. He can probably catch it. He can punt it," Grimm said. "You saw him punt it, so I don't know if there's anything he can't do at this point."

Daniels also set another first before the end of the third quarter, though it was one he wanted to avoid. He was dropped by sophomore cornerback Joshua Pickett on a corner blitz for a 4-yard loss, marking the first time he was sacked this season.

That it came against Duke wasn't a surprise. The Blue Devils' first-year coach Mike Elko, a longtime defensive coordinator, entered with a stout defense that had been forcing 1.7 turnovers a game and recovered a Football Bowl Subdivision-high six fumbles — a total it increased to seven when it fell on one by Neal in the first quarter.

Duke gained 463 yards, including 139 on the ground, as Leonard completed 24 of 35 passes for 324 yards and a touchdown. Redshirt junior running back Jaylin Coleman ran 5 yards for a touchdown in the first quarter, classmate Jordan Waters ran 3 yards for one in the fourth and senior wide receiver Jalon Calhoun caught a 27-yard touchdown pass for Duke with 2:40 remaining. Redshirt junior Charlie Ham netted a pair of field goals to add to the scoring.

But the Blue Devils, even aided by the Jayhawks' seven penalties for 83 yards, couldn't recover late. After their failed fourth-down conversion, Daniels ended the game with a pair of kneel-downs at midfield — and it was only fitting for him to finish the fourth win with the ball in his hands.

"I think he's done a heck of a job getting a lot of people to take notice and take this program seriously," Leipold said. "He's a big component of that."

Loved the downfield blocking by Locklin and McBride on Hishaw’s long TD.

Hishaw is an incredible complement for Neal. Neal can take it to the house too. It makes it very hard to defend against this offense with these two guys combined with JD double threat, and it is maybe the best double threat in the country right now.

Skinner and Morrison too.

Skinner is much better than I thought he was going to be for sure. Morrison has the speed, but he is new with this team so getting his feet wet and getting an opportunity to find his place in this offense will be of great benefit the next couple of seasons, and maybe later this season.

Great day in college football yesterday. Big 12 goes 2-0 vs. the SEC, KU sells out in a battle of unbeatens, WVU and TCU with really good non-con wins, and the KU qb continues to draw national attention due to his prolific skills. As a bonus: Missouri loses a game in epic fashion. What a beautiful day!

I still have goosebumps. With Jalon Daniels at the helm and our likeable version of “coach K” (Andy Kotelnicki), KU’s offense is darn fun to watch. Daniel Hishaw is a beast with the ball, the offensive line is outstanding, and the receiving core catches the ball and are clearly unselfish with great downfield blocking. KU’s season will ultimately be decided by the defense, who played a very physical game, because even a defensive minded head coach stated “(KU) gave us a hard time with what they did on offense” (Mike Elko). KU is the only 4-0 team in the Big 12 (OSU and TCU are the only other undefeated teams at 3-0). Texas and OU (thanks to that team “who will not be named” west of Lawrence) are at the bottom. The only downside to people taking notice of the Jayhawks (a group of students sat in front of us on the Alumni side and asked who is our head coach), Memorial Stadium is antiquated and can’t handle a full house and the traffic in Lawrence was a mess after the game. Nevertheless, if this is a dream, I don't want to wake up. Rock Chalk.

I wonder how those that left the program in the Spring are feeling now. They could have been a part of something special.

The best is yet to come.

Brett - The Big12 and sec didn’t play this weekend. ACC?

I realize that the D is popularly talked about as a weak link but in watching highlights last night, I was impressed by the coverage of our DBs on most of their big pass plays. They were really good throws and catches in tight coverage. Against Houston, a bunch of their O came when Tune ran after finding no one to throw to. Still think we’re gonna see lots of improvement this next month as all the new guys start to get more comfortable with our system. Already starting to see it with some being on the field more. Great balanced participation numbers.

Continuing to be impressed with Luke’s ability to go up and get passes. He doesn’t look like that type of receiver but continues to make those plays over and over again.

What everyone wants to talk about though is the beautiful pass from Jalon. What might be missed by many as it was by me to begin with was that he had a DL in his face and was jumping backwards to throw it over the defender. Amazing arm. Amazing. (It’s also an inc by too many WRs in the past, and maybe just a sack with too many OL of the past. )

Grimm has some good hands. That one catch against West Virginia was similar but not in the endzone. He's got some hops and he's a really good route runner. He's not the only one with that potential. JD's arm is NFL quality in both strength and accuracy.

first time in a long time that I've sat and watched the full KU football game.

I was impressed by the team's on field execution. The offense ran great, the team made relatively few unforced errors and penalties. Defense for the most part was strong, and there were some bad penalty calls late that almost cost KU, and I hope that LL and his team can make that case abundantly clear to the officiating staff.

There was a little bit of questionable in game decision making by the coaching staff that I'm sure they will examine and hopefully get some quality assurance safeguards in place to help them with in game decisions going forward.

It was very entertaining football and very exciting and so good to see the stands full of KU fans. I'm excited for the ISU game this weekend. 5-0? Hard to believe it's a possibility

Jonathan - Lance commented during the post-game that because it was a noncon crew, he wasn’t sure he’d be able to contact anyone about the calls. Others have commented that he adequately addressed what some have referred to as questionable decisions. I’m enjoying most of the interviews more and more all the time. Love Coach Leipold and K.

yeah, about the officiating crew, at first I was gonna say that he would have a talk with the league about it, but I reworded it because I figured it was probably an out of conference officiating team. But seriously, he should make sure that the league knows about it. They showed the replay on the late hit on TV and in slo-mo it was obvious that the Duke QB hadn't gone OOB yet, in fact looked like he was trying to tip-toe on the sideline. I don't know the replay rules but seems like that one should have been reviewed. Also the PI call that the TV crew questioned it looked like a perfectly timed pass defense. Overall it was a very clean game with few mistakes by the team. Reminded me of the Mangino years where KU was notoriously good in the penalty yardage margin.