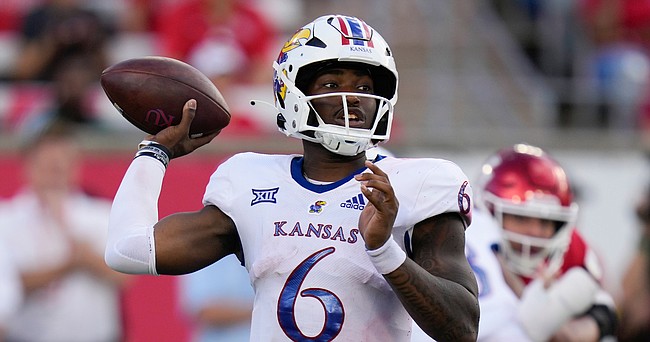 Kansas quarterback Jalon Daniels looks to throw a pass during the first half of an NCAA college football game against Houston, Saturday, Sept. 17, 2022, in Houston. (AP Photo/Eric Christian Smith)

Tossed into the Heisman Trophy conversation after two strong weeks to open the season, Kansas quarterback Jalon Daniels merely added to his case in Week 3 with another solid outing in a win over Houston that earned the KU QB Big 12 Offensive Player of the Week honors.

Daniels accounted for five touchdowns and 281 yards of offense in Kansas’ 48-30 win at Houston over the weekend.

It marks the first time Daniels has won the conference honor and he becomes the first Jayhawk to earn the recognition since Carter Stanley on October 28, 2019 (vs. Texas Tech).

Daniels is Kansas’ third Big 12 Player of the Week recipient, joining Cobee Bryant and Lonnie Phelps, who combined to earn back-to-back Big 12 Defensive Player of the Week honors for the first time in program history in Weeks 1 and 2.

Against Houston, the Lawndale, California, native completed 14-of-23 passing for 158 yards and three touchdowns while rushing for a career-high 123 yards and two touchdowns on 12 rushes, as well.

Through the first three games of the season, Daniels is Kansas’ leading passer and rusher, completing 47-of-70 (67.1%) passes for 566 yards and seven touchdowns, while rushing 27 times for 244 yards and three scores.

Daniels’ five-touchdown performance against Houston was the first of his career with multiple passing and rushing touchdowns. He also became the first Jayhawk since Todd Reesing in 2009 to throw and rush for 2 or more touchdowns in the same game. Daniels completed passes to 11 different receivers in the win at Houston, leading Kansas to a 3-0 record for the first time since 2009.

Daniels has led Kansas to score 159 points in the first three game, which makes the Jayhawks the third-highest scoring team in the country. Kansas is averaging 53.0 points per game with 22 touchdowns and two field goals. Kansas is also ranked seventh in FBS in rushing offense at 259 yards per game and second in the country in third-down conversions at 68.6%.

Kansas returns home on Saturday to host Duke in the final non-conference game on the schedule. Kickoff is slated for 11 a.m. at David Booth Kansas Memorial Stadium with a nationally televised broadcast on FS1.

I really wish I could make the trek up to Lawrence this weekend! I hope it's a sold-out stadium. This team is so fun to watch and root for. ROCK CHALK!

An incredible performance and a great choice for the award.

So, the team is in a weird place that it hasn't been in a long, long, long, long time. They are a home favorite against an undefeated P5 team, they received votes in the top 25 poll, and they have the possibility of a sold-out stadium. It is a a whole different thing to deal with.

My prediction is that we fall behind 14-0 approximately 7 minutes into the game and then score a gazillion over the last 3.5 quarters.

Hey Bill. I'm in Owasso. Good to know another alum is down that way. I see a few Jayhawk tags around Owasso and have in Tulsa as well. Can't wait for Saturday! Rock Chalk!

Not bad for a Rivals 2-star prospect with no National/State/Position ranking. HS rankings, for the most part, don't mean a lot when it comes to who can really play. https://kansas.rivals.com/commitments/Football/2020

Suzi - Maybe he just read the comments that the first two games were a fluke. Nothing to really get excited about. Thought I read yesterday that either his performance against Houston or year to date was the highest QBR rating ever. Ever. Wow.

According to ESPN (https://www.espn.com/college-football/qbr/_/view/alltime) JD's QBR of 97.5 through three games is the best QBR of all time. repeat "OF ALL TIME".

Granted, it's three games...good money says that doesn't hold up through the end of the season, but it does support how well he's played so far. Digging into the states a little deeper, he hasn't had the top score any specific week, but his consistency has him on top overall (so far).

Could it be a RB when duke starts to key on Jalon? Or maybe the safeties get sucked into the box to stop the run and Skinner, the unsung former walkon goes over the top. So many options. Coach K is such a mad scientist.

Congrats Jalon!!...Congrats to the whole offense and the coaches/staff/the whole team on the award....EVERYONE PLAYED A ROLE!!!!!

Bill, I have to point out that you missed spelled Puke.

Suzi - HS rankings DO mean a lot. Checking out the rosters of the elite programs shows that to be true, but they don’t mean everything in college or beyond.