Notebook: Lengthy lightning delay no problem for Kansas in victory at Houston 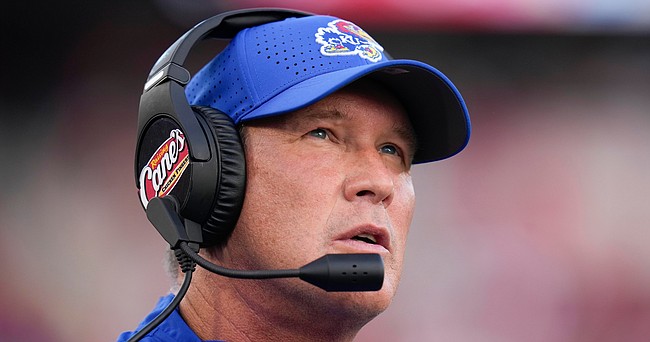 Kansas head coach Lance Leipold watches from the sideline during the first half of an NCAA college football game against Houston, Saturday, Sept. 17, 2022, in Houston. (AP Photo/Eric Christian Smith)

HOUSTON — A 69-minute lightning delay postponed, but did not prevent, Kansas' 48-30 win at Houston on Saturday.

With the score tied at 14 and 9:21 remaining in the second quarter, the Jayhawks had advanced 79 yards on nine plays and were preparing to run a play on second-and-goal from the Cougars' 5-yard line when officials paused the game because of a nearby lightning strike.

The delay was initially for 30 minutes, during which players, coaches and the 30,317 in attendance at TDECU Stadium were asked to take cover. Additional flashes of lightning lengthened it, and after a pause at 3:59 p.m. local time, it wasn't until 5:08 p.m. that the game resumed.

"I don't think in my career I've gone through a weather delay ever, so that was kind of uncharted territory," coach Lance Leipold said. 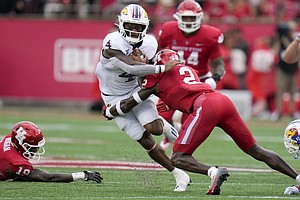 Leipold intended to keep his players' activity levels high, figuring they'd return to the field after a 20-minute pause — almost a premature halftime — and begin warm-ups before resuming play.

Once that became unlikely, players broke down by position groups and began to discuss what worked in the opening frame and what didn't.

"(We were) just sitting in the locker room, just going over what we were able to do better as an offense," junior quarterback Jalon Daniels said. "We didn't start off too hot. We were down 14 again, so I just felt like, what things do we have to do to be able to execute the plays that were called?"

The temperature was 91 degrees amid sunny skies at kickoff, but that changed quickly. It began to rain no more than three minutes into the game, though that had dissipated by the time the lightning delay began.

The last time the Jayhawks were in a lightning delay was their Oct. 5, 2019, home game against Oklahoma, though that was just a 30-minute delay.

"The (coaches) just talked to us about keeping our heads right so we can go out and finish the game," redshirt senior defensive tackle Caleb Sampson said.

Saturday's game was supposed to be the first of a home-and-home series, but it had to be scrapped following Houston's decision to join the Big 12 beginning next season. 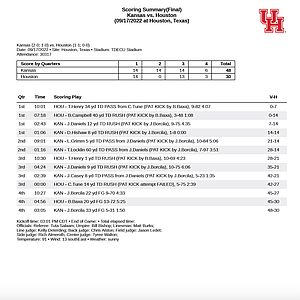 Kansas was not paid for Saturday's game as is customary with one-offs, but its traveling costs were covered by Houston.

The Jayhawks filled their opening on next year's schedule with a game at Nevada, with the second game in the home-and-home series set for 2029.

Tune gets his chance

Houston redshirt senior quarterback Clayton Tune made his 32nd start on Saturday. He had initially committed to play at Kansas as part of the Class of 2018 in February 2017 but backed off his pledge eight months later.

The Jayhawks instead added quarterbacks Miles Kendrick, who transferred to New Mexico after last season, and Torry Locklin, who is now a redshirt junior running back. Locklin caught a 60-yard touchdown pass in the second quarter.

No sacks for Parish

Houston sixth-year senior defensive end Derek Parish, who set an AAC record with 4.5 sacks in an overtime loss at Texas Tech a week ago, finished without one. In fact, the Cougars did not sack Daniels once, keeping the quarterback's clean streak alive through three games.

• The Jayhawks improved to 4-0 all time against Houston, though the teams had not played since the 2005 Fort Worth Bowl. They're now 2-0 against the Cougars when on the road, with the previous game a season-opening win at the Astrodome in 1994.

• Tristian Fletcher, a sophomore linebacker from nearby Cypress, Texas, was part of the Jayhawks' travel roster. He did not join the team for the trip to West Virginia.

• Senior safety Kenny Logan Jr. was on the field for the opening kickoff return but was replaced by redshirt sophomore running backs Daniel Hishaw Jr. and Sevion Morrison for the others.

Kansas will return to David Booth Kansas Memorial Stadium for the first of three consecutive home games on Saturday when it faces Duke at 11 a.m. The Blue Devils topped the Jayhawks 52-33 in Durham, North Carolina, last season.