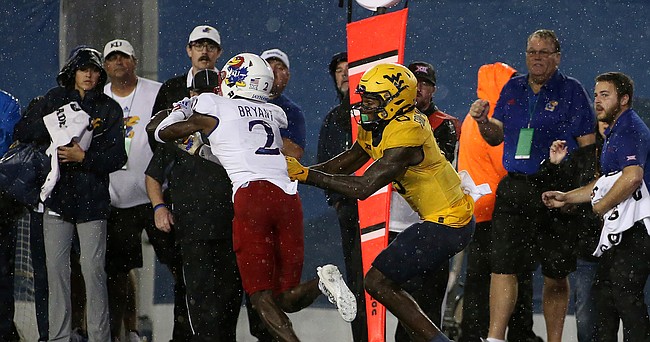 MORGANTOWN, W.Va. — Cobee Bryant didn't care that nearly everyone on Kansas' sideline was yelling at him to down the football and end the game.

The sophomore cornerback saw the end zone and couldn't stop.

"I wanted to score, to be honest," Bryant said after his interception in overtime, which he returned 86 yards for a touchdown, gave the Jayhawks a 55-42 win at West Virginia.

"I wanted the pick six. Next time, I know to go down, but all I saw was green, so I just kept running. I wanted to make a statement to them — 'goodnight.' I said goodnight." 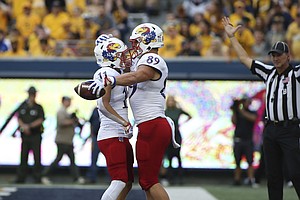 Bryant and the Jayhawks did so emphatically, winning at Milan Puskar Stadium for the first time in a topsy-turvy game that tested their resilience.

Kansas, which won its Big 12 opener for the first time since 2009, climbed out of a 14-point first-quarter hole and was victorious despite squandering an 11-point lead with a little over four minutes remaining.

"I'm so proud of them," coach Lance Leipold said. "We got our backs against the wall early, fought through that, got the lead and all that and played really well."

West Virginia tied the score at 42-42 with 35 seconds remaining, and Kansas opted to take the game to overtime to put it away.

Daniels, who finished 18-for-29 for 219 yards and three touchdowns without an interception, made West Virginia pay by throwing a 4-yard touchdown pass to redshirt sophomore wide receiver Quentin Skinner over safety Marcus Floyd.

West Virginia was up next, and quarterback JT Daniels, who transferred from national champion Georgia following last season, appeared to have lost the ball on a fumble on second down. A review determined that he was trying to throw the ball, making it an incomplete pass, but the turnover soon followed. 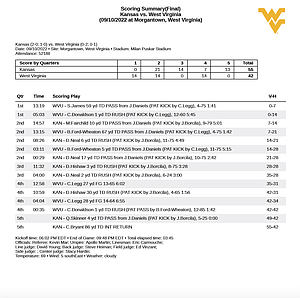 Bryant read an outbreaking route on third-and-5 that was intended for redshirt junior Bryce Ford-Wheaton, jumped it and secured the ball as his sideline erupted. By falling to the ground, Bryant would have immediately ended the game.

"We knew that we were going to get punched in the mouth in this game," said redshirt junior linebacker Craig Young. "We just had to punch them back in the mouth and stay on their neck and stay (together) as a team."

In that game, the Jayhawks had no problem moving the ball or stopping an overmatched team, though players and coaches alike recognized the quality of foe as a caveat.

The difference in talent between the first two weeks' opponents was obvious from the start on Saturday. Kansas allowed a 59-yard touchdown pass to Sam James just 1:41 in, and when West Virginia doubled down with another touchdown later in the quarter, it seemed as though the Jayhawks were in for a long night.

But senior tight end Mason Fairchild's 10-yard touchdown catch three seconds into the second quarter was the first of five consecutive touchdown drives between the teams, and Kansas headed into halftime trailing 28-21.

It had the ball first to start the second half an again scored a touchdown, and with the score tied at 28, West Virginia sophomore wide receiver Reece Smith muffed a punt that led to Kansas going ahead 35-28 following a 2-yard touchdown run by redshirt sophomore running back Devin Neal.

Kansas was up 42-31 with 10:59 to play when redshirt sophomore running back Daniel Hishaw Jr. ran 30 yards into the end zone, but West Virginia responded with a field goal, forced the Jayhawks to go three-and-out and then moved within striking range when freshman tight end CJ Donaldson ran 1 yard for a touchdown to make it 42-40 with 35 seconds left.

Ford-Wheaton, who finished with 11 catches for 152 yards and two touchdowns, caught the two-point conversion pass to tie the score, but that was it for the Mountaineers.

Junior Luke Grimm led the wide receivers with six catches for 66 yards. The Jayhawks converted 11 of 15 third downs and endured an uncharacteristic six penalties for 70 yards, including five for 55 in the first half.

West Virginia, which is 0-2 for the first time since 1979, gained 501 yards. JT Daniels went 28-for-40 for 355 yards, three touchdowns and the interception, and the Mountaineers combined for 146 yards on the ground.

Leipold said the overtime win at Texas last season gave the Jayhawks confidence that they could pull off a similar outcome again.

"As we know, this is a group that has been bruised mentally a lot, and they're starting to gain some confidence and believe in one another and (gain) confidence in the system and how they're going about it," he said. "This is one that you sure hope you build upon."

Kansas QB Jalon Daniels on the Jayhawks' win at West Virginia by KUsports.com

Kansas' Devin Neal on the running game's performance in the win at West Virginia by KUsports.com

Fun to watch this team battle and so much fun to win a Big 12 road game!!!!

Bryant is getting a knack for pick-6’s. Wasn’t he the DB that got one against the shorthorns?

55.5 ppg must be close to leading the nation.

Glad the D got just enough stops, though more would certainly be nice.

Best Coach in America ...PERIOD!!!!....Daniels was sensational....Kotelnickis play calling was superb....I am so happy right now...I may stay up all night!

Was I the only one screaming for him to keep running? I wanted the extra TD!!!

In the absurd scenario that he were to fumble and WV recovered, it would be considered a new possession since possession changed mid-play. Each team is only granted 1 possession in OT, so the game would be over if he had fumbled.

I wonder if a 13 pt victory in OT has ever happened? It certainly can't be topped...

Zac Boyer posted this on Twitter: "According to ESPN research, Kansas is the first team to win by 13 points in overtime since Central Michigan defeated Eastern Michigan 36-23 in 1998." Has it happened more than twice? Don't know.

This is the third time.

Actually, it could be topped. If it were to happen, it would probably be in a second overtime, with a pick 6 following a TD and 2-pt. conversion.

Great win Jayhawks! I was surprised we didn’t go for it on the second to last possession, fourth down and 1 with a couple minutes to go. Would have sealed the deal if they converted. Unfortunately we punted and the Mountaineers did what they needed to do and tied the game to send it to overtime. We were fortunate JD got that roughing the passer call or it would have likely been game over. A hugely entertaining nail bitter for sure. Way to show your grit and determination! Our improved depth showed that we can compete through the fourth quarter and beyond!

It’s been a long time since the Mangino days, but we are back baby !!!

So two wins in a row means we are heading to the Orange bowl? Tn Tech. was not a test, and we gave away an 11 point lead down the stretch and needed a roughing the passer penalty in OT to score a td. WV was picked to finish near the bottom of the conference.

Wins are nice, but let's see how we play the next game.

These are all good points. I also think the WRs were better than expected. 200 yards rushing is really good against that defensive front because of that speed option.

Let's not get too far ahead, turns out Pitt was over-rated. A bone headed roughing the passer would have made a really bad 4th down scenario.

And we cant stop the pass yet, luckily WVU abandoned it in the second half.

But we beat TX by one last year at TX and this year the favorite to win it all only was able to win by 1.

A win on the road in the B12 is significant.

Houston next week will help us evaluate compared to TTU.

Maybe. The roughing the passer was boneheaded, but they did it. It was a bad play for them that they caused and got called for it. They still had a chance to stop KU after that and didn't, and they had a chance to score. Also, the play when JT threw the ball in the endzone, sh ould have been intentional grounding and a safety and we would have won in regulation. Their muffed punt, and the INT. We made more plays than they did.

Some have said we were saved by the roughing the passer call, but that likely only changes the margin of victory from 9 to 13.

I’m not sure how Pitt is overrated (much) after a good game against ranked Volunteers. They might only be in the 20’s next week but are likely to still be ranked.

Seems to be extra conjecture this year. Is this team good/bad based on perception of a game against maybe a good/bad opponent. (Houston, AppState, UTSA, Pitt, Duke, Northwestern TTU, ut, Marshall, domers, Florida, Utah, Oregon, …) Seems that plenty of talking heads make a living out of declaring definitively each week, and others get sucked in. Lots of talk about point spread, etc, but little substance about why. Glad we get to watch the games.

TTU was favored to win against Houston. App State and Marshall wins were legit upsets. TTU won a game that they were favored by 3 to 4 points to win. BYU over Baylor was a surprise too but both were ranked. I agree that we were not saved by the roughing call. WVU hurt themselves with it. We've been on the other end of that call and it was our fault, not theirs.

Rodney, by saying West Virginia got picked to finish "near the bottom" of the Big 12 (are you calling a forecasted Big 12 in conference play of 5-4 and a 6th place finish) near the bottom? I mean I know 6th place is closer to 10th than 1st. But let's not choose to call it half empty when it is really more than half full. Especially when Oklahoma State, the forecasted 3rd place team in conference was only projected at 5-4 in conference as well. Not many at all gave Kansas a shot to start the season at 2-0... and certainly not a win at West Virginia to kick off conference play after WVA landed JT Daniels in the offseason QB transfer sweepstakes.

No Mike, ESPN projected WV at 3-8 (9th, near the bottom), one game ahead of us they saw at 2-9 I think zero wins in conference for us. I am not going to look it up, it was on ESPN's site. Even on here WV and TxT were discussed as possible wins for us. ESPN before the season listed us as the 19th worst team in D-1.

ESPN thought KU could win 2 of the first 3 games. So they felt 2 wins before conference was possible. Maybe steal one in conference.

Beating WV on the road in OT was a nice road win. Lots of positives in our fortitude. To beat our chest, like some on here, that we are back, or going to surprise others, is over the top.

Let see where we are after the Duke game. It should be clearer by then.

It is not half full by any means. It is a nice surprise, and we will take it.

It would seem that is worth credit to the coaches for corrections at the half and the players for responding accordingly.

ESPN had us with about a 16% chance against WVU and even less against Houston. Maybe 2 of the first 4.