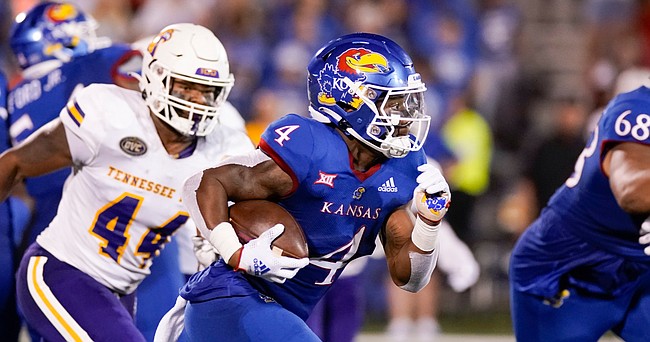 Kansas running back Devin Neal takes off on a long touchdown run against Tennessee Tech during the third quarter on Friday, Sept. 2, 2022, at Memorial Stadium.

Much has been made about the way the Kansas football team overhauled its roster during the offseason by adding 21 players via the transfer portal.

West Virginia doesn't have nearly as many, but between the addition of one of the country's most experienced quarterbacks in JT Daniels and the incorporation of several starters on defense, the Mountaineers look different than they did when the Jayhawks closed their season with a home loss against them in November.

"People talk about what we've done, but they've done a great job utilizing the portal as well," Kansas coach Lance Leipold said. "When you're playing Game 12 a year ago, it doesn't really equate to the pieces we're going against."

Kansas will make its first foray into Big 12 competition with a road game against West Virginia on Saturday night. The Jayhawks opened their season with a 56-10 demolition of Tennessee Tech, a Football Championship Subdivision opponent, and WVU fell 38-31 on the road to rival Pittsburgh.

Daniels, the 2017 Gatorade National High School Player of the Year, started 11 games as a freshman at USC in 2018 and transferred to Georgia in 2020 after recovering from a knee injury that cost him almost all of 2019. He won the national championship with the Bulldogs last season, though not as their starter, before choosing to head to West Virginia.

"He's very experienced," Leipold said. "He's back in an offensive system in which he started his college career, so you could see it on film — very comfortable in that."

Both teams will try to run the ball. Kansas gained 297 yards on the ground against Tennessee Tech but will be going against one of the Big 12's most dominant defensive fronts, anchored by redshirt senior defensive lineman Dante Stills. WVU racked up 190 rushing yards versus Pitt and will be going against statistically the worst run defense in the conference a year ago.

But to further show the differences since November, the Mountaineers got 125 of those rushing yards from CJ Donaldson, a 6-foot-2, 240-pound freshman.

"It was three games ago, but how many months?" offensive coordinator Andy Kotelnicki said. "There's growth, I think, in both teams."

1. Run it, again and again: Kansas' rushing attack will look significantly different than it did last season when it played West Virginia. Running back Devin Neal, now a sophomore, missed that game with an injury, and the Jayhawks ended up running for just 87 yards, their fewest against a Football Bowl Subdivision opponent. Neal will play Saturday — as will redshirt sophomore Ky Thomas, a transfer from Minnesota who ran for 144 yards and a touchdown in the Guaranteed Rate Bowl win over the Mountaineers.

2. Cut them down to size: West Virginia's top receiving threats are redshirt senior Bryce Ford-Wheaton, who is 6-foot-3, and sophomore Kaden Prather, who is 6-foot-4. Ford-Wheaton, in particular, made Pitt's defensive backs look foolish a week ago as he made several contested catches as part of his nine receptions for 97 yards and two touchdowns. Kansas' top three cornerbacks — redshirt senior Kalon Gervin and sophomores Cobee Bryant and Mello Dotson — are each shorter than 6-foot-2. "We're certainly aware of that," defensive coordinator Brian Borland said. "But we're going to do some things, hopefully, that will give our corners a little bit of help as well."

3. Navigate the country roads: There's a reason why Kansas was playing John Denver's celebrated anthem during practice earlier this week. "Preparing for an environment that we're going into," said Kotelnicki, who gave credit to video coordinator Jimmy Le for having the song ready. The Mountaineers present the Jayhawks' first road test, and it's a unique environment that comes with the added challenge of the longest road trip of the season. Being able to handle a hostile crowd is the next step in Kansas' development as a team.

Lonnie Phelps Jr.: The 6-foot-3, 245-pound redshirt junior transfer from Miami (Ohio) made an impact in his first game with the Jayhawks as he finished with seven tackles, including four for a loss and three sacks — all team highs. He may have done that against Tennessee Tech's overmatched offensive line, and now he'll get the chance to do that against West Virginia, which had its own struggles protecting Daniels a week ago. "It was awesome," Borland said. "Now, we've got to get complementary pieces to him so on offense, they can't just gear their protections and things around one guy."

5: The number of players who ran for a touchdown against Tennessee Tech. Neal, redshirt sophomores Daniel Hishaw Jr. and Sevion Morrison, redshirt junior Torry Locklin and redshirt senior quarterback Jason Bean all found the end zone, marking the first time since at least 1996 the Jayhawks had five or more players run for a touchdown.

45.5: Career tackles for loss for Stills, who needs 2.5 to set the school record. He had two against Pitt, including 1.5 sacks.

43: Years since West Virginia started with back-to-back losses. The last time was in 1979, when it finished 5-6 in coach Frank Cignetti's final season.

Number 0 Bryce Ford-Wheaton has to be taken away...he is what Coach Borland has to be worried about the most...you take him away and Daniels will lose his most valuable and key piece...that was my takeaway from watching the Pitt game.....Number 0 is a match up problem...so all eyes on him!

From a 24/7 podcast with the WVU rep, it sounds like the right side of the OL is not nearly as settled as the rest. The WRs had 6 drops but also saved a couple of ugly plays. While the DL is stout with other players as well as Stills, there was a lot of turnover in the back side, and there were quite a few missed tackles back there.

Cj Donaldson needs to be contained. Number 1 priority. We will win this game if we can do that.

One thing that's nice about this is that they get their longest road trip of the season out of the way early. Much better than later in the year when they have far more injuries and exhaustion to deal with.

A 2 hour flight versus an hour and 45 min flight? Way too much is made of this.

Jeff - It would seem even more so when you consider all the other time involved in a road trip. Packing. Getting to the flight. Getting to the hotel. Etc. The difference of one trip vs another seems minimal.