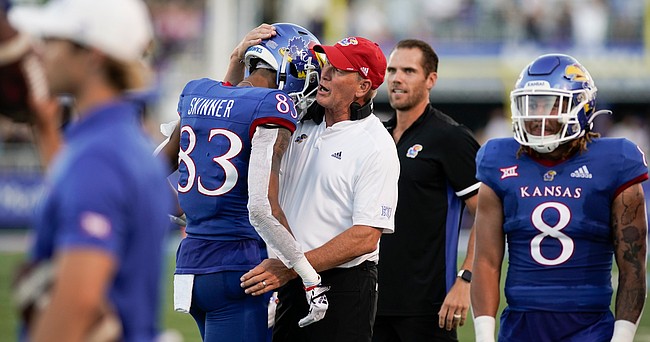 Kansas head coach Lance Leipold gives a hug to Kansas wide receiver Quentin Skinner (83) after Skinner pulled in a deep catch to set up a Kansas touchdown during the first quarter on Friday, Sept. 2, 2022 at Memorial Stadium.

Last Friday night, on the heels of a 56-10 win over Tennessee Tech in the season opener at home, several Kansas football players took time out from their celebrations to emphasize their understanding that things were going to get much harder in Week 2.

KU coach Lance Leipold appreciated that and, in some cases, was even a little surprised by it.

“To see that is encouraging. It really is,” Leipold said Tuesday while previewing KU’s Week 2 matchup at West Virginia. “Even some guys who don’t speak up a whole lot were very much in that mindset right away. That’s a great sign of maturity and understanding that yeah, let’s celebrate this, let’s enjoy this, but, yes, there’s more to come and the challenges are going to increase in a lot of different ways.”

This season, the shift from opening night to Big 12 football will require an entirely different mindset. Leipold noted attention to detail and improved physicality as two of the biggest areas KU will need to be sharp in during Saturday’s 5 p.m. kickoff in Morgantown, West Virginia. And he said that might be a bigger challenge for the Jayhawks (1-0) than it will be for the Mountaineers (0-1), who lost at Pittsburgh in a high-stakes, high-intensity rivalry game last Thursday night to open their season.

“I think they’re understanding that conference games are going to be a lot different than playing a home FCS game,” Leipold said of his players as they prepare for WVU.

The Mountaineers, who were picked to finish eighth in the Big 12 in the preseason coaches poll, are 6-0 all-time against the Jayhawks in games played in Morgantown. Those wins have come by an average score of 40-14, but the freshest memory in the minds of these two teams is last year’s 34-28 WVU win in Lawrence.

KU running back Devin Neal, who led the Jayhawks in rushing last season and led Kansas with 108 yards and two TDs in last week’s season opener, did not play in that game.

Both teams brought in a significant number of new faces — many of them starters — which adds to the uncertainty and anticipation surrounding this year’s matchup.

Leipold likes where his guys are at entering this one, and he expects that WVU coach Neal Brown will have his team ready to roll, as well.

“(We’re) a different football team than we were a year ago, for the better,” Leipold said. “We’ve got to be able to go out there and execute.”

Regardless of the outcome on the scoreboard, Leipold said it was important for his players to treat Saturday’s game as another important step in rebuilding the program.

“This is probably going to be a big test on the road and a true evaluation of where we are early,” Leipold said. “It’s not going to be a do-or-die or (define) where we’re at or where it’s going, but it’s going to be a stop along the way.”

During Tuesday’s news conference, Leipold provided an update on the status of suspended wide receivers Tanaka Scott and Trevor Wilson.

After the charge against him was dropped, Scott returned to practice and Leipold said he was “available” for Week 2 at WVU. Whether the redshirt freshman from Mobile, Alabama, will play on Saturday remains to be seen.

Morgantown on a Saturday night....home opener...coming off a loss....Yeah....it is going to be a very tough test...it is going to be very important to keep the blinders on...have total and complete focus...keep the play calling simple early so the players can adjust to the crowd noise...jitters and overall environment..hand signals take a little getting use to at a first road game...teams that win on the road have poise...confidence in what they are doing...but again...having the BLINDERS ON and keeping your laser FOCUS...no penalties...especially false starts and delay of game penalties...no turnovers PERIOD!!!...CREATE turnovers...blocked kicks..stripping the ball..jumping some routes etc.. and also be very aware of where number 0 is at on every play!...and take him/that away... don't let him beat you!!!...and of course...11 HATS to the football on every play!!! GOOD LUCK YOU GUYS!!

I had forgotten Neal didn't play in that game.

I feel way better about this game than most probably do. KU by 10.

KU shocks the World on Saturday-but not themselves! They believe they can/will win this game! We are much better, much deeper, much stronger, and have a lot more experience, than we had last season! Rock Chalk!

I for sure will be shocked if Kansas wins. I'll be pleased if KU covers the point spread. I'll be disappointed if Kansas loses by more than 3 TDs

Out here in West Virginia, I am happy to report I have two tickets to this crucial game. My son and I will be going to Morgantown and I am looking forward to socializing with other KU Alumni. We are close enough to the East Coast to attract at least a sprinkling of KU Alumni to the game.

As for the Game itself, WVU is favored by 13 points, and the Over/Under total points is 57. So, the oddsmakers are suggesting roughly a 35-21 WVU victory. I would bet KU on the point spread, I truly believe KU will be competitive in this game. As Lance has repeatedly stated, we need to get to the 4th quarter with a chance to win. A KU upset is certainly feasible.

Everybody should visit Morgantown at least once in their life. The atmosphere and tailgate parties are electric. The WVU fans will be "well lubricated" before the 6 pm kickoff.

"get to the 4th quarter with a chance to win" That's a good goal.

I can no longer build such optimism in KU football until they prove it out with some consistency. Last week was good. Keep this game close and I'll be feeling much better going into the rest of the schedule, but I think KU falls by something between 2 TDs and 3 TDs, let's say 17-35