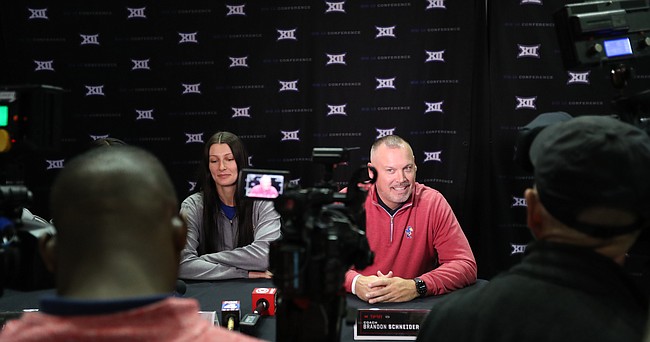 Kansas City, Missouri — The Kansas women’s basketball team took its turn at the Big 12 Conference Basketball Tipoff on Tuesday, and the four Jayhawks in attendance received a fair amount of attention from media members around the league.

That could be the result of their return to the NCAA Tournament last season. Or it could be because of their expectations for the upcoming season.

Either way, these Jayhawks are not shying away from sharing their high hopes for the 2022-23 season.

Never was that more evident than last Friday at Late Night in the Phog, where Kansas coach Brandon Schneider told the Allen Fieldhouse crowd that his team would be ranked in the top 20 this season, would contend for a Big 12 title and would be ready to make some noise in the postseason next March. 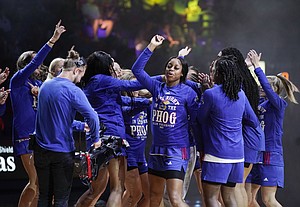 The Kansas women's basketball team dances at half court during Late Night in the Phog on Friday, Oct. 14, 2022 at Allen Fieldhouse.

None of it phased any of Schneider’s players, three of whom were with him at T-Mobile Center in Kansas City on Tuesday.

“It was a good feeling,” said senior guard Holly Kersgieter of hearing Schneider announce their plans to the crowd last Friday night. “Last year, it was more internal that we talked about it. So now that we’ve kind of made a statement, we can be a little more confident about it and tell the world.”

“It was pretty much just him putting everyone on notice,” Franklin said Tuesday. “We talk about it every day. That’s our goal when we walk in the building. That’s pretty much on our mind all the time.”

Because of that, senior center Taiyanna Jackson — now in her second year with the program — was not at all surprised by Schneider’s big talk. Like her teammates, she liked it, as well. But she liked it for more than just what it means to the players in the program.

“I expected it,” Jackson said Tuesday. “The standard got higher and that’s something that we all believe in, the coaches, our athletic directors and the people around us. All of that is something they expect us to do this season.”

For what it’s worth, people outside of the program are expecting more, too. After years of being picked at or near the bottom of the Big 12 Conference in the preseason polls — and usually finishing there, as well — the Jayhawks were picked to finish fifth this season.

That was good enough, in their minds, that they did not need to come up with any stunts like the one they pulled last year when they burned the preseason poll on the front lawn of Allen Fieldhouse.

Added Kersgieter of her coach’s pyro stunt: “I vividly remember that, but we proved (last season) that that stuff doesn’t matter to us and we don’t let it affect us. We don’t worry about other peoples’ expectations. We just worry about ours.”

Those expectations are sky high, of course, and they involve finishing higher than fifth in the conference, even if they won’t obsess over not being picked to do so.

So why then did Schneider make such a deal of announcing their goals and plans to the Allen Fieldhouse crowd last week?

“For one, I wanted to capture the moment,” he said Tuesday. “We don’t get to address 16,300 (fans) very often. And I wanted our fan base to know that our staff is very, very confident in what we think our team can become.”

When Coach Schneider was asked how the team felt about being picked to finish 5th in the Big 12, he said that he and they hoped that meant there was an expectation that 5 teams will be contending for the title. I believe they believe they have a legitimate shot at it. Also, I think that when he says the Jayhawks will be ranked in the top 20 in the nation this season, he doesn't believe he's going out on a limb. This is going to be a lot of fun!