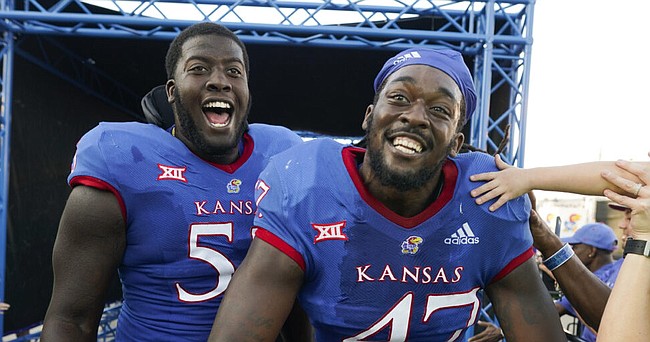 As Kansas was scuffling through the season a year ago and enduring one lopsided beating after another, coach Lance Leipold never stopped to consider what things would be like in 52 weeks' time.

If he did, what he would have projected likely would not have resembled reality: The Jayhawks, undefeated through five weeks, No. 19 in the Associated Press poll, with the national spotlight illuminating the university.

"I knew a year ago we were a ways away, so to say I could imagine that at this time, no," Leipold said. "But I wouldn't have viewed it as a failure if we weren't (successful), either. ... There's probably a moment you've got to pinch yourself a little bit."

Kansas wants to delay that moment for as long as possible and has found a way each week to do so. Yet on Saturday morning, it will encounter another plucky upstart in TCU, a team that has undergone less of a rebuild but still figured to face a long road back to excellence as recently as this summer.

What will transpire at David Booth Kansas Memorial Stadium is a clash of two of the 16 remaining undefeated teams in the FBS and their high-powered offenses. Should the Jayhawks emerge as the survivor, they'll start a season with six consecutive victories for the first time since 2007.

"They've earned the respect that they have," first-year TCU coach Sonny Dykes said.

Kansas will ride the energy from a third consecutive sellout crowd and the on-site broadcast of "College GameDay," ESPN's flagship preview show, into the meeting with the No. 17-ranked Horned Frogs, who have started 4-0 behind Dykes and quarterback Max Duggan.

A senior set to make his fourth appearance against Kansas, Duggan leads the FBS with a passing efficiency rating of 202.2, is third with a 74.5 completion percentage and has thrown for 11 touchdowns without an interception. His performance has only been surprising because Dykes benched him before the season for redshirt sophomore Chandler Morris, only for Morris to leave the opener with a left knee injury.

All told, the Horned Frogs, who surprisingly dismantled then-No. 18 Oklahoma 55-24 last week, enter Saturday ranked second in the FBS with 48.5 points and 549.5 yards per game. They're also averaging 8.33 yards per play, tops among the 131 teams.

That means it's fortuitous timing for the Jayhawks to have had their best game of the season defensively last week in a 14-11 win over Iowa State.

"It would be a shame this week to go out and fall on your face and you're left wondering again, 'Well, what was that last week?'" defensive coordinator Brian Borland said.

Not only would a victory move Kansas to 3-0 in the Big 12, giving it as many conference victories as it had in all of the previous five seasons combined, it would be among the first teams in the nation to reach one elusive milestone.

It'd be eligible to play in a bowl game, which it has not done in 14 years.

"We haven't kind of hit what we can be," Leipold said. "But as we know, this is the biggest challenge so far in many different ways, so it will be another good measuring stick, that's for sure."

1. Offensive cohesion: Kansas was stilted offensively last week as it gained just 213 yards against Iowa State. Junior quarterback Jalon Daniels, who entered averaging 222.5 passing yards and 80 rushing yards per game, was held to 93 and 9, respectively. TCU's base defense is similar to Iowa State's in that it uses three linemen and five defensive backs, two of whom are NFL prospects in cornerbacks Tre'Vius Hodges-Tomlinson and Noah Daniels, though it plays more man-to-man coverage than the Cyclones.

2. Defensive pressure: A large part of the Jayhawks' strong defensive performance against the Cyclones was the pressure generated by its front seven. Kansas had five sacks and eight tackles for loss against redshirt sophomore quarterback Hunter Dekkers, who, unlike Duggan, was making just his fourth start. TCU has a quality offensive line that has combined for 132 starts, and the Horned Frogs have allowed six sacks this season.

3. Big-play potential: TCU has had 75 plays go for 10 or more yards, including 31 for 20 or more and six for 60 or more. Kansas, which has been susceptible to big plays, has allowed 61 for 10 or more yards. "We put on the big-play tape and it's through whatever, four games they've played, they've got about 80 big plays in four games," Borland said. "That's impressive to me."

43: Percent of the time an opponent scores a touchdown against Kansas after entering the red zone. That ranks 20th in the FBS.

479: Yards in the first half by TCU against Oklahoma, the most by an FBS team against an FBS opponent in a half this season.

Some have been dismissive of KU because of the SOS, but theirs is only propped up by the facade of OU. 5 weeks in and an 8 pt win against a mediocre team is their toughest game. Maybe they're good, but the stats are worthless when the competition is that weak.

Thanks Zac. Congratulations on the new job though sorry to see you go. And extra thanks for the double duty to help with the transition.

Thought I saw the betting line open at 3 or 4. Several now have it as high as 7. TCU has impressive highlights which is about as deep as many dig.

I thought Kotelnicki said Ky Thomas is 100% and a go for tomorrow. Not true?

One thing that is promising is that Sonny Dykes has a long history of having teams with great offenses and terrible defenses.

Although their defensive stats are pretty good so far, we'll see how they do against our high-powered offense.

Dale - Matt commented in another article that Zac had taken a position with a non-newspaper company, but had agreed to help while LJW found his replacement. He’s understandably not as connected with all the details nearly as much as he would be otherwise.

The coaches did say he’s had multiple good days of practice and expect him to play Saturday.

That's the plan guys...11 hats swarming to the football on every play...whoever is lined up across from you..DOMINATE THEM...DOG THEM...WIN THE FIGHT ON THE FIELD!!! Play smart ..play error free... NO TURNOVERS OR PENALTIES....know your assignments...force turnovers...block and tackle in a textbook way...no stupid mistakes...you guys are going to have to play out of your minds to win...you must out physical them in every area and on every down...no daydreaming...no plays off....total focus...blinders on and MENTALLY LOCKED IN...I BELIEVE IN YOU GUYS...YOU KNOW WHAT TO DO...GOOD LUCK!!!

This may sound trite, but a different officiating crew than last week might help. The calls against Kansas were mostly correct, but there were several holding calls overlooked against Iowa State, in addition to the picked up flag on the block in the back during the ISU punt return.

Hopefully TCU comes in overconfident and still on a high from their big win over OU, and KU catches them off-guard and pulls the upset! Go Jayhawks!