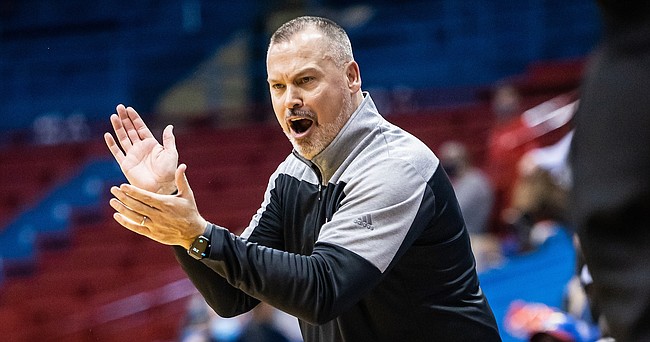 For the first time since 2012, the Kansas women’s basketball team has been picked by the league coaches to finish in the top half of the Big 12 Conference standings in the preseason.

It also illustrates that things are trending in the right direction for head coach Brandon Schneider’s squad.

Just last year, the Jayhawks were picked to finish last in the Big 12 preseason poll and they blew that prediction out of the water by finishing fifth in the 2021-22 conference standings and reaching the NCAA Tournament for the first time in a decade.

Needless to say, being picked as one of the more talented teams in the league is a new position for Schneider’s program.

All three returners played a huge role in the Jayhawks reaching their first NCAA Tournament since 2013 and advancing to the second round after a first-round win over Georgia Tech.

KU was one of six Big 12 teams to reach the NCAA Tournament last season and all six won at least one game in the postseason. In addition, the Big 12 ranked third in the conference NET rankings.

Kansas will open the 2022-23 season on Nov. 9, against Jacksonville, in the first of seven home games during nonconference play.

The Jayhawks will play a total of 16 games at Allen Fieldhouse this season, with the first Big 12 home game set for Jan. 4 against Texas Tech.

KU will not have any exhibition games this season.

I think it's safe to say that a 5th place finish would be a huge disappointment to the KU women, and I don't believe they're going to be disappointed.

What’s clear in the voting as well as the play last year (iirc) is the separation of the top tier, or really 2 top tiers/tandems. KU is closer to the kitties in 6th than to 4th, both of whom are on a bit of an island separated from the top and bottom.

I think they only won one of those top games last year. Gotta get more top Ws. Keep making progress.

I think we also lost our first player off the bench and former starter, but added one of the top transfers. I’m forgetting names, but looking forward to more stories.

Over the top? I don't think so. Not at all. Will hold this view until contradicted by the players.