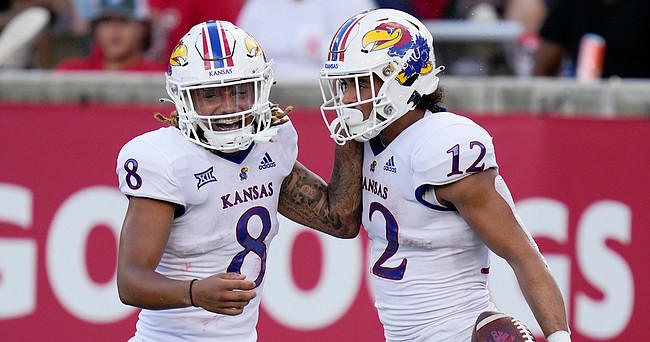 Kansas running back Torry Locklin (12) celebrates after his touchdown with Ky Thomas during the first half of an NCAA college football game against Houston, Saturday, Sept. 17, 2022, in Houston. (AP Photo/Eric Christian Smith)

After missing the last two games with what Kansas football coach Lance Leipold called “a lower extremity” injury, KU running back Ky Thomas is on track to play again this weekend.

KU Offensive Coordinator Andy Kotelnicki said Wednesday that he expected to have Thomas available when the 19th-ranked Jayhawks take the field for their 11 a.m. College Gameday clash with No. 17 TCU on Saturday.

Asked Wednesday if he thought Thomas would be “ready to go” for Saturday, Kotelnicki said simply, “I do. Yep. Yep. He’s been out there. He’s had a couple really good practices and it’s good to see him back out there running around.”

The former four-star back who transferred to Kansas from Minnesota in the offseason appeared in KU’s first three games but logged just 11 carries total in those outings. He carried the ball a season-high seven times for 19 yards in the season-opening win over Tennessee Tech and recorded two carries for four yards in a win at West Virginia and two for six yards in the win at Houston.

His impending return comes at a good time for the Kansas offense, which will be without running back Daniel Hishaw Jr. for an extended period of time. Hishaw was injured in KU’s win over Iowa State last weekend and his absence will test KU’s running back depth that was touted throughout the preseason.

“It really stinks for Daniel, obviously,” Kotelnicki said Wednesday. “But regardless of however a player’s unavailable, we have to have the next-man-up mentality. We feel like we’ll be OK. We do. I’m excited for what that room will continue to do.”

Hishaw and sophomore Devin Neal have been KU’s two top runners throughout the first five games of the season. Quarterback Jalon Daniels also has been a big part of KU’s rushing attack, but Hishaw’s blend of power running and run blocking has been huge for the Kansas offense.

With that out of the lineup, others will be asked to step up in those areas, and Kotelnicki said Wednesday he expected that Neal and Thomas, along with Sevion Morrison and Torry Locklin, were capable of doing just that.

Thomas, a redshirt sophomore from Topeka, came to KU in the offseason after rushing for 826 yards and six touchdowns on 166 carries during his redshirt freshman season at Minnesota in 2021.

The 5-foot-11, 200-pound tailback led the Gophers in carries and rushing yards and tied for the team lead in rushing touchdowns.

Kansas QB Jalon Daniels talks about what he saw on film after last week's win & looks ahead to TCU by KUsports.com

KU's Brian Borland breaks down why the Kansas D played its most complete game of the season vs. ISU by KUsports.com

I'm looking forward to seeing what Thomas can do. Hopefully he is 100% and has the offense figured out now. He could be a major asset, along with the other RB's, for us.

I'm excited to see Thomas for some regular reps.

He didn’t look good in the early season games. This would be a good time to step up if he is going to.

Thought I heard some people that know football comment that the blocking coincidentally wasn’t good on Ky’s carries. It seemed that he might have been tentative, which I’ve also heard has been a problem for other RBs in this running scheme. It would be great for him to have a breakout game.

Also being a gopher fan, ky will be rock solid as long as he gets more opportunities. He was great last season and he's only a sophomore.

Morrison has also looked dynamic and explosive in limited duty. Thomas obviously needs more carries to get into the flow of the game. The Hishaw injury was devastating, but I would anticipate that Thomas and Morrison can fill that void. Rock Chalk!

What is the possibility of seeing Bean lined up in the backfield alongside Jalon? Has any one ever run the option with 2 QBs? It is fun to look forward to what the mad scientist will come up with for play calling.