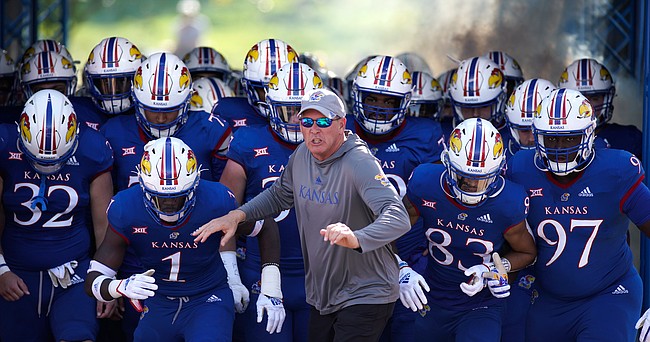 Kansas head coach Lance Leipold and the Jayhawks storm out of the tunnel to take the field before kickoff against Iowa State on Saturday, Oct. 1, 2022 at Memorial Stadium.

Kansas football coach Lance Leipold has started a season with five straight wins eight times in his 16 years as a head coach.

The six times it happened during his wildly successful stint at Division III Wisconsin-Whitewater, Leipold’s teams ended up playing in the national title game that season and went on to win five of them.

The two seasons in which it happened during his time at Buffalo ended up in bowl games.

It’s clear that fast starts and early wins is nothing new to Leipold and the many members of his coaching staff who have been on this ride with him. But the second-year KU coach admitted after last Saturday’s home win over Iowa State that there was something new about racing out to a 5-0 start at Kansas.

“It feels different because of what this group’s been through,” Leipold said. “But, you know, we’ve only been here 16 months or whatever it is and we’re focusing on where we’re at and what we have to improve on for next week.”

That approach is Leipold to the core. It’s how he made a name for himself as a player and then as a coach and how he earned promotions and big raises after showing success at each of his first two coaching stops.

So, yeah; you’re more than a little crazy if you think this particular 5-0 start — however improbable it may be — is going to knock Leipold off the proven path that has led to where he and the Jayhawks are today.

Hard work, humility and daily improvement, no matter how small, will continue to be the rallying cry for the 19th-ranked Jayhawks. And that will be the case regardless of how many pregame television shows or big-name accolades get thrown their way.

That’s not to say that Leipold and the players on this team aren’t enjoying the extra attention. It’s clear that they are. But the focus inside KU’s football facility is about continuing to do the things that brought the attention on, not choosing to let up because it arrived.

The fact that so many in and around Lawrence, from all kinds of different walks of life, have been energized by their success only adds motivation and joy.

With seven games remaining and KU sitting just one win shy of becoming bowl eligible, the chance to build and turn this season into one for the ages rather than a nice little run to start the season, is in front of them.

So you’ll have to excuse Leipold if he’s enjoying this one just a little bit more than those 5-0 starts that he, his past players and countless other people came to expect.

This one’s different. And it doesn’t sound like Leipold or the Jayhawks believe they’re anywhere close to being done.

“Based on what everyone thinks where this program was going to be this year, yeah (this 5-0 start feels different),” Leipold said Saturday. “But you’ve got to finish the story, right? And we have seven more games to go.”

The first of those kicks off at 11 a.m. Saturday on FS1, as an encore performance to ESPN’s College Gameday being on KU’s campus for a football game for the first time ever.

Sorry if I am being redundant, but a shout out to our own Matt Tait for his appearance on last Saturday’s ESPN’s College Gameday. He was able to share how morbid the football program had become (under Gill, Weis, Beaty, and Miles) and highlighted the lack of fan support. Clearly the success of the Jayhawks has helped Matt’s national exposure. Importantly, the trickle down from a competitive football program is clearly paying dividends for the city of Lawrence. I just checked and the closest hotel room available for Friday night is in De Soto. Rock Chalk.

Appreciate the love, Andy. The Gameday thing was a lot of fun and it definitely is a reminder — however small — that college football really does stir the drink.

I was surprised how much of me they used and I'm mostly just glad I looked and sounded OK.

I thought the piece was really well done. And if this team keeps winning there'll be even more of it ahead. Fun stuff!

This is exciting and there are 7 tough games left on the schedule, the upcoming one might be one of the 3 toughest games left on our schedule. That being said, this is what we have dreamed about with each coach being hired. Wins and the hope of extending that magical 2007 season. I still keep the November 26, 2007 Sports Illustrated magazine on my desk. Among other KU memorabilia.

I'm tempted to call this week a must win game. We don't have to win out to have a successful year, and going into the season, 4 wins would have been considered a success. Now at 5-0 we have great momentum for our program, our campus, students, and fans are about to be featured in front of the national audience. We have a prime opportunity in front of us to showcase the school and earn a postseason berth on our home field in front of the wildest crowd we've had in over a decade and with the country watching. If we lose, the season is still far from over, but the momentum will suffer and we will be left with only 2 home games remaining out of the final 6. We could drop 7 straight and the 5 that we have won would mean a whole lot less. I think that we'll find a couple more wins this year still. Win this week and I think 8 wins is realistic because of confidence and momentum. Lose this week and the path to 6 wins and a potential bowl trip doesn't look nearly as certain. Also, "bad losses" do matter. They matter mostly for fan support but also to the morale of the team. Everyone in the league is beatable now, but I can't look at the remaining schedule and point out a single team that we would be clearly better than.

At this point in time, Oklahoma.

Kansas hasn't beaten Oklahoma since 1997, but how sweet would it be if they could do that this year, especially with the Sooners bolting for the SEC in 2025!

Who is remaining that KU can beat? Maybe the Frogs and the Red Raiders. C’mon and just do it, Jayhawks!

Huge game this week...Coach knows we can score some points against them...the question is...can we slow their offense enough and eliminate the big plays of 20 yds or more....we are not going to hold this offense to 11 points...no way and Coach knows that...it is going to be a shootout mostly likely with the over number maybe in the 70's probably by kickoff...more of the bend but don't break philosophy this week ....I think something extraordinary is going to happen this weekend...my little voice is normally right...this game will be worth having a ticket for. Get ready to WAVE THE WHEAT a lot on Saturday!

Anyone thinking of buying tickets to this weekend's game should hurry. Last look, 18 of 26 sections are sold out and all 8 of the remaining sections are listed as "low availability." Likewise, the OSU and UT games are showing significant sales already.

8 games is realistic. I am betting on 7.

If Tulane can pick up a win in Manhattan, why can’t the Hawks?

Martinez was extremely cautious during the Tulane and prior games. Right up until he essentially was threatened with bench time if he didn't start hanging it all out. The question now is whether he can continue playing well without all the interceptions and fumbles he is well known for but has avoided at KSU. The kitties don't have much depth behind him and Vaughn, so injuries could play a factor in their future this season, as well. Being the last game of the season, I think both teams will be at their best, barring injuries, and it will be a terrific end to the regular season before we go bowling.