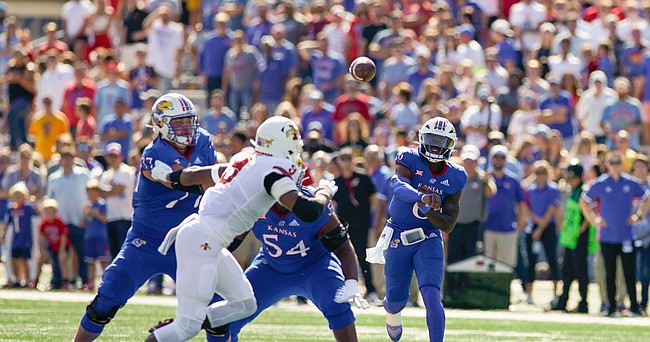 Kansas quarterback Jalon Daniels (6) throws to a receiver during the first quarter against Iowa State on Saturday, Oct. 1, 2022 at Memorial Stadium.

While the goal certainly was not to stall his team’s explosive offense, Kansas football coach Lance Leipold said Saturday that the Jayhawks’ conservative approach in the 14-11 win over Iowa State was by design.

“We played a little more probably on the conservative side and played a little more field position because of who they are,” Leipold said of an Iowa State squad that entered the day ranked 15th in the nation in total defense. “So to find a way to get it done says (a lot) about this team.”

After two second-quarter touchdowns gave the Jayhawks (5-0 overall, 2-0 Big 12) a 14-0 lead, the offense sputtered most of the rest of the way.

The Cyclones (3-2, 0-2) had plenty to do with that, giving up just 213 yards of total offense on the day and limited Heisman Trophy candidate quarterback Jalon Daniels to just 93 yards passing and 9 yards rushing. 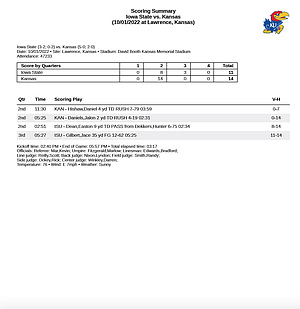 KU recorded just three first downs in the entire second half and ran nine plays for negative yardage in the fourth quarter. That included a pair of fourth down calls in plus territory where Leipold elected to punt rather than try to get the first down. The punts were largely successful and the Jayhawks won the game, so, in the big picture, it didn’t wind up hurting anything.

But it might have had it not been for a horrific special teams day by the Cyclones, who missed three field goals and also gave the ball away by muffing a punt.

Leipold said after the game that his decision to punt instead of going for it in those fourth down situations had a lot to do with the fact that the KU offense never really looked to be in rhythm after the opening quarter and a half of Saturday’s victory.

“I think the game and a little bit of (the) score (factored into it), too,” he added.

Leipold then dug deeper and addressed the decisions even a little more clearly.

“To me, today’s difference was first and second down,” he said. “We had a lot of third and longs today. Well, third and longs don’t give you a lot of chances to go for (fourth downs). Fourth and five and six, I don’t know if I was ready to pull the trigger on that today. And that’s on me.”

Despite the off day from what had been one of the nation’s highest-scoring and most-efficient offenses, Leipold said he was proud of the way his team did not let the lack of success tear them down.

“There’s a difference between enthusiasm and being a little too emotional,” he said. “I don’t think our confidence waned, though. I really didn’t. There’s not a lot to get excited about when it’s a one- or two-yard gain.” 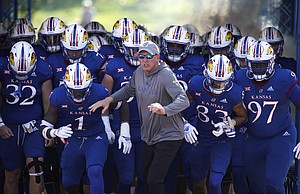 View a gallery of images from Saturday's game between the Kansas Jayhawks and Iowa State Cyclones.

As he has been known to do even after his biggest and best games, Daniels put a lot of the blame for the offense’s struggles on his shoulders. But he, too, was proud of the way he and his teammates stayed locked in and found a way to win. For that, Daniels gave most of the credit to the KU defense.

“The defense showed out today,” he said. “A whole bunch of defensive guys came up to me after the game and were like, ‘You know we got you.’ And I was like, ‘That’s love. Just keep doing what you’re doing.’”

Daniels then added: “Having adversity on the offensive side of the ball isn’t something we’ve really had much this season. So to be able to keep that positive mentality throughout the whole entire game no matter what’s happening, it’s not necessarily easy but I thought we did a great job no matter what situation we were in.”

Leipold also gave some of the credit for KU’s off day offensively to the Iowa State defense and the Cyclones’ unique defensive front that shows teams a lot of different looks and can be difficult to prepare for in a single week.

But he said watching his team fight through the frustrations of going backwards as often as they went forwards at times could wind up being good for this group in the long run.

If nothing else, they now know that even on a day when they don’t have everything clicking, they can still find a way to win.

“As we know, this thing’s not going to get any easier by any stretch,” Leipold said. “But I think it’s going to give us a chance to be confident and know that we can go in there and play people for four quarters and see where it takes us.”

Next up, KU will play host to unbeaten TCU at 11 a.m. next Saturday on FS1. ESPN’s College Gameday announced Saturday night that it was coming to Lawrence to showcase Kansas football during its weekly college football preview show.

Kansas WR Luke Grimm on the KU defense & what’s next for this team by KUsports.com

Kansas football coach Lance Leipold meets with the media after moving the Jayhawks to 5-0 by KUsports.com

It didn’t help that and unusually high # of penalties hurt us for the second week in a row.

Friday, I watched a rerun of the 2007 ISU game. It was interesting to hear the announcers comment several different times during the game on factors that led to the successful season: 1. Lack of penalties,

Conservative play calling nearly killed us today. Kansas didn’t win the game. Iowa State lost it. Look, you have to know who you are and play to your strengths. We didn’t do that in the second half. You should be playing conservative when you’re up two touchdowns with three minutes to play. Play conservative based on a position in the game and not because of that team name on the jersey.

We can’t do that anymore.

YOU PLAY TO WIN THE GAME!!!

Gotta agree with you on this one, Joe. The Jayhawks' strength is offense, not defense. The KU defense has been inconsistent through the year, and they repeatedly gave up big plays to the Cyclones and committed untimely penalties that allowed them to sustain time-consuming drives. Yes, they only surrendered 11 points to ISU, but that had more to do with the fact that their kicker couldn't hit the broad side of a barn. I know Brian Hanni and David Lawrence tried to spin this as a game where the KU defense won the day, but the more I think about it, the more it feels like the Jayhawks profited more from luck than good defense.

Well even if you give them the 9 points, holding a Big12 offense to 20 is progress.

We did get lucky, but their special teams are a facet of the game and they were horrible. Our defense did play better than they had all season and forced them out of their element. There were some passes that Dekkers through that if our guy had been watching the ball, we could have had a couple more interceptions but that was because they didn't send Hutchinson deep because we had over the top help on him. He caught a lot of passes, but not the big scoring plays.

We didn't miss those field goals for them. That is true. Their kicker missed 3 of them, but that is because their special teams were horrible, and if ours had been bad like that we would have lost but we woudln't say Iowa State was lucky. Iowa State has to take responsibility for their terrible special teams play, we cannot control that. 3 missed FGs. 1 muffed punt. And an interference called on their punt team. Probably the difference in the game that stuck out the most, but those would have been irrelevant if JD had hit those 2 passes and we have to take responsibility for that.

We should also acknowledge that our defense played pretty well, especially against the run, a lot of pressure on Dekkers with 5 sacks and some hurries. We had some key break ups of passes and we played really well against the run. Years past, we would have lost this game, but with this new attitude on this team we overcame some things that we wouldn't have even come close to overcoming this time last season and previous seasons.

Now we have TCU to look forward to. I'm not going to take anything away from them but Gabriel had 126 yards passing before getting the head shot that caused him to have to exit. That was early in the 2nd quarter and he would have likely went for at least 350 or 400 yards through the air. The OU defense, however, is suspect. I don't know how OU will recover or if they will, but these are are next two opponents and we can beat TCU. I do not think that TCU is nearly as good on defense as ISU is, and we're at home again and ESPN Gameday is in town. Going to be a crazy day in Lawrence. Going to be a ton of excitement around this game and it will be interesting to see how our guys are under the spot light.

Yeah, I watched that game too before listening to the KU-ISU game. The Hawkeye offense sucks worse than it did last year. The sad part is, that's not going to change, because Kirk Ferentz's son is OC, and Daddy ain't going to fire his son, especially when he's grooming him to replace him as head coach someday.

Bryce - The goalposts are tiny compared to the broad side of a barn and he hit them not once but twice. That’s pure talent. Reminds me of the KU video where a walkon QB had to hit the goalpost to avoid extra conditioning. {sarcasm font off}

If the KU offense plays like they did against ISU, expect the Frogs to crush the Hawks something like 63-7.