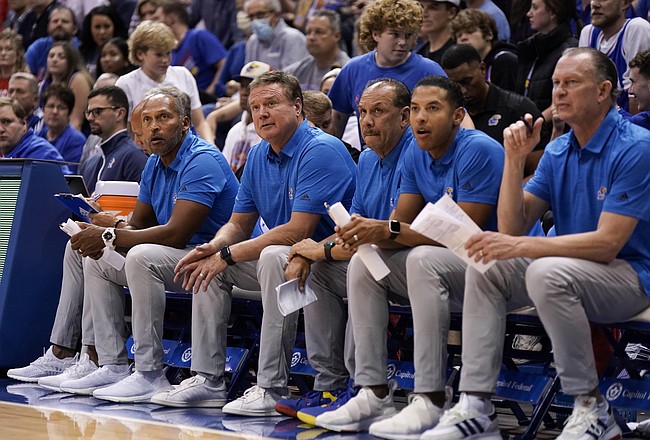 Kansas head coach Bill Self and members of his staff look to an official for a call during the second half of an exhibition on Thursday, Nov. 3, 2022 at Allen Fieldhouse.

Kansas basketball coach Bill Self said the time he spent away from the Jayhawks to serve a four-game suspension gave him a better understanding of what it’s like to be a fan.

“The first two games were actually OK,” Self said Tuesday of KU’s easy wins over Omaha and North Dakota State. “(Watching) Duke and Southern Utah, I didn’t feel quite as comfortable as I did the first two.”

The reason had everything to do with the helpless feeling that accompanied him while watching from the couch instead of the head coach’s chair.

“I saw it from a fan’s perspective,” Self said. “And now I know why fans are crazy. They have absolutely no control. At least as a coach you think you have some control.”

Self worked with the Jayhawks during practices throughout the four-game, university-imposed suspension, but for the 24 hours of four game days, it was Norm Roberts who had control, not Self.

He certainly contributed to KU’s game plans, and he had his ideas about what should happen and when after the ball was tipped during each of the four Kansas victories. But on game nights, he sat back and tried his best to accept what he watched happen on the screen in front of him.

“I didn’t actually take one note,” Self said Tuesday. “I took all my notes when I watched the replay. I was too busy (yelling) ‘Get him out!’ Or, ‘What are we doing?’ during the actual game.”

Self said he was proud of acting head coach Norm Roberts for doing such a good job in his absence — “of course, you knew he would,” Self added — and KU starters KJ Adams and Dajuan Harris Jr. also said they were pleased with the way Roberts kept the status quo after taking over.

Although KU made it through the suspension of Self and assistant coach Kurtis Townsend unscathed and ranked third in the nation, Self rejoined the team hoping that a little early-season adversity would be good for the players and the program in the big picture of what they’re trying to build this season.

“Me stepping away, at least in that moment in time, might be a positive for us,” Self said.

KU opens play at this week’s Battle 4 Atlantis Tournament in the Bahamas against North Carolina State on Wednesday at 11 a.m. on ESPN.

The winner will play the Wisconsin-Dayton winner at 10 a.m. on Thanksgiving Day.

Kansas basketball coach Bill Self breaks down the Bahamas field & talks about his return by KUsports.com

KJ Adams & Dajuan Harris Jr. talk about the return of Bill Self and the challenge in the Bahamas by KUsports.com

Welcome back, coach! It will be great to see you again on the sidelines.

Hey, I think all of us fans can relate to what you shared as to how it felt as someone watching the games vs. coaching the game. That said, I only see upside going forward.