KU to face balanced N.C. State team that shoots a lot of three-pointers in opening round of Battle for Atlantis 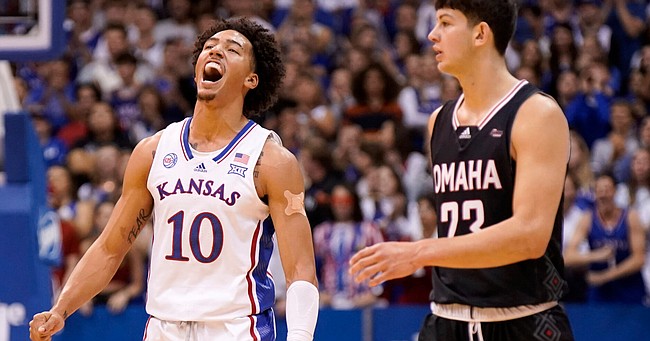 Kansas forward Jalen Wilson (10) celebrates a three next to Omaha forward Frankie Fidler (23) during the first half, Monday, Nov. 7, 2022 at Allen Fieldhouse.

There’s no shortage of names to circle in the scouting report as Kansas prepares to take on North Carolina State in the opening game of the Battle for Atlantis Tournament in the Bahamas.

Chances are the Jayhawks will be able to find all of them outside the three-point arc. In four games this season, the Wolfpack have shot 111 three-pointers — 35 more than the Jayhawks have taken through their first four games — and N.C. State is averaging just more than 88 points per game.

N.C. State comes in unranked on the season, but with a 4-0 record and an average margin of victory of nearly 25 points.

KU Coach Bill Self called the slate of teams at the tournament a “very, very strong competitive field.” In addition to KU and N.C. State, the tournament includes Butler, Brigham Young, Dayton, USC, Tennessee and Wisconsin

“And the field is even better than the rankings,” Self said. “So, it will be a good three days and we’ll learn a lot about our team.”

Here’s a look at other news and notes about KU’s matchup with N.C. State and the Battle for Atlantis Tournament.

— N.C. State almost certainly will have redshirt junior Jalen Wilson circled on their scouting report. Nearly all of college basketball does, as Wilson has put together back-to-back career high scoring games, and leads all Big 12 players at 24.5 points per game. Wilson is nearly averaging a double-double with 9.3 rebounds per game. But unlike N.C. State, KU doesn’t have many other double-digit scores. Freshman Gradey Dick is the only other Jayhawk to crack the double-digit mark at 16.8 points per game.

— While the Wolfpack will do plenty to keep KU busy on the perimeter — they’re making about 37% of their three-point attempts compared to KU’s 33% — the Jayhawks also may have their work cut out for them on the inside. N.C. State is out rebounding its opponents by 8 rebounds per game. KU — which was out rebounded in its last game against Southern Utah — has a rebound margin of just plus 3.5 this season. That’s good for just eighth in the 10-team Big 12 Conference thus far.

— One of the biggest discrepancies on the stat sheet between the two teams is at the free throw line. N.C. State is making nearly 74% of its free throws. Kansas is at just 56%, and currently has the lowest free throw percentage of any team in the Big 12.

— If you are looking for a standout stat for the Jayhawks, check on blocked shots. KU is averaging 7.5 blocked shots per game, tops in the Big 12 and fourth best in the NCAA.

— If KU wins on Wednesday, it will face the winner of Dayton and Wisconsin at 10 a.m. on Thursday, with that game also televised on ESPN. The championship game is scheduled for 6:30 p.m. on Friday, also on ESPN.

Only 88 ppg. Our last opponent was averaging 103 ppg. Is our schedule getting softer?

Upsets happen when the opponent gets hot from 3’s, so KU’s defense needs to be turned up. The venue (converted convention center auditorium) in Atlantis is weird for playing and watching basketball. And if the Jayhawks advance the loudest fan base (Dayton - at least based on the ESPN invitational from last season) could be awaiting. Should be a fun tournament in warmer weather than Lawrence (Matt did the journal world pony up funds for you to attend in person?). Rock Chalk.

Andy, you are too kind in calling it a converted convention center auditorium--more like a small, converted, carpeted ballroom with low ceilings. Peaked in there once while in the Bahamas. Super cool yachts in the marina right outside.

Our D will be the difference. And making shots of course. Hope all the players are hydrated and ready.

Andy - Guessing Matt (not Lindaman😉) is home with his wife and new bambino.