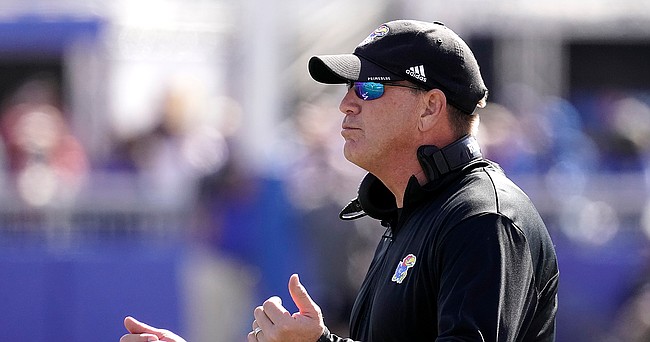 Kansas football coach Lance Leipold has agreed to a contract extension that is expected to keep him in Lawrence for the long haul, a source with knowledge of the conversations between KU and Leipold told the Journal-World on Tuesday night.

ESPN’s Pete Thamel was the first to report Tuesday’s contract news, noting that KU and Leipold have agreed to terms on a new contract that includes an extension through the 2029 season.

It also almost certainly comes with a significant raise that sources have said could as much as double what Leipold’s original six-year deal with Kansas was slated to pay him.

Tuesday’s news is the culmination of a season’s worth of negotiations and contract talk that started as early as Week 3 or 4 while Leipold’s second Kansas team raced out to a 5-0 start and back into the national polls.

With momentum already on their side, the KU administration announced a one-year extension for Leipold before the season opener in September. That added a year to his initial six-year deal, which he signed in April 2021 that included an escalating annual salary that would pay him $16.5 million total, or an average of $2.75 million per year.

Leipold, who has led the long-suffering program to bowl eligibility in just his second season in charge of the program, has said throughout the season that his intention is to be at KU for a long time. Now, he has agreed to a new deal that will make that a certainty.

In doing so, it puts an end to nearly constant chatter about Leipold as a hot candidate at both Nebraska and Wisconsin, schools he has significant ties to from the past.

Leipold came to KU from Buffalo, which he led to its own significant turnaround after guiding Wisconsin-Whitewater, his alma mater, to six Division III national championships in eight seasons.

Leipold’s wife, Kelly, was the first to hint at the Leipolds staying in Lawrence long term, when she tweeted earlier a thank you of sorts for the “memorable” 2022 season, adding, “Can’t wait to be back at The Booth next season.”

While Leipold staying is significant news for the direction of the program that has returned to being a competitive program on an almost week in and week out basis, it may be even bigger for the future of KU's stadium renovation plans.

In October, KU announced a massive project with plans to overhaul the entire area surrounding the northeast corner of the current David Booth Kansas Memorial Stadium location. Support for both Leipold and the current direction of the program under him has played an important role in KU's fundraising efforts tied to making the project come to life.

Kansas will close out the 2022 regular season at 7 p.m. Saturday, when they travel to Manhattan to take on No. 15 Kansas State on FOX.

Nothing is ever guaranteed but this is encouraging. Staying for the long haul is basically what he has been saying all along, though plenty have been sure that there were more millions to lure him elsewhere.

Best news I've heard all week. Besides......the last thing Coach LL would want to do is take a step backwards and coach at Nebraska.....it's a dying program.

I concur i fell top programs are in trouble now that NIL is here. When you get into such big conferences it will be nearly impossible to maintain winning year in and year out because it is going to become more difficult to get good players. IMO, even sacred programs like Alabama are going to struggle. 4 and 5 star recruits are not going to sit for 3 years hoping they get the chance to start. With NIL contracts now almost any School T-shirt promoter/Alumni donor can pay a player for their NIL to attend their Alma mater and then the players get to start and STAR immediately. So, the days of signing 22 four to five star players are waning.

Enthusiasm dampened by 0-41 score, at home, on senior day, vs. an average team, in his second season. Really no excuse for that performance.

But happy for the consistency in the program, though Willie Fritz would have been a great replacement option.

Great news. I'm excited about the bowl game this year and what could be an even better year next season! Congrats all.

Nicely handled by the University of Kansas administration. One must make decisions before knowing perfection or everything will be lost. This is an intelligent move looking at the long haul. Congratulations.

I'm thinking we might see some commitments soon with this news.

Also, something else to consider:

The seesawing of things when the Big 12 had north and south divisions really hurt teams and records. Playing the perceived weaker teams two years and then flipping back to the tougher teams caused that slip from year 2 to year 3 for Mangino. We did ourselves no favors next year with another rough non-con schedule playing Illinois and at Nevada, but the groundwork should be there to repeat as a bowl team and break the trend between Leipold and Mangino's first 3 seasons at KU.

Ugh, MANGINO, not managing. Thanks, auto"correct".

I hope this will also kick up salaries of the coordinators and assistants eventually. He brought so many from Buffalo -- hopefully it pays off for them as well.

It still might take another couple of seasons to get into the upper tier of the conference.

Someone mentioned divisions. Next season there won't be any, but I'm not sure how it will be handled going forward. BYU, K-State, KU, Iowa State, Cincinnati, and WVU in the north? Or will be east/west divisions with KU, Iowa State, Central Florida WVU, K-State(or TCU), and Houston in the East? North/South divisions make more sense, or simply a rotation with 5 in division games each year and 3 out of division, plus 4 non-conference games each year? The extra non-con will benefit the league,IMO. So how would the rotation work? Houston, TCU, Baylor one year, OSU, TTU, and Central Florida another year? Every other year?

Is it right or wrong to make sure that everyone plays other teams in the conference,even if it is on a rotation?

Micky - It seems that conferences are moving away from divisions in order to get the two best teams in a championship game. I’d expect something similar for the Big12. Maybe there will be small pods (3-4 teams) that play each year with the remainder of games rotated amongst the other pods. Definitely hope they go back to 4 non con (1 FCS, 1 P5, 2 middling Ws).