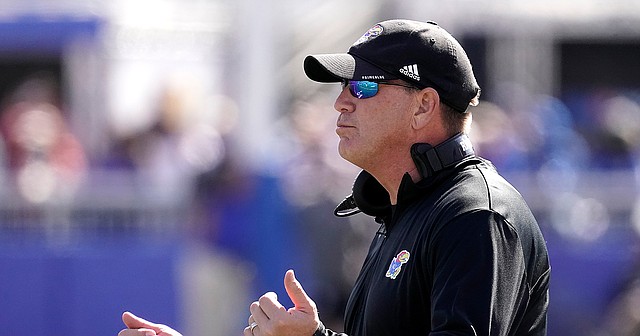 Kansas football coach Lance Leipold has agreed to a contract extension that is expected to keep him in Lawrence for the long haul, a source with knowledge of the conversations between KU and Leipold told the Journal-World on Tuesday night.

ESPN’s Pete Thamel was the first to report Tuesday’s contract news, noting that KU and Leipold have agreed to terms on a new contract that includes an extension through the 2029 season.

It also almost certainly comes with a significant raise that sources have said could as much as double what Leipold’s original six-year deal with Kansas was slated to pay him.

Tuesday’s news is the culmination of a season’s worth of negotiations and contract talk that started as early as Week 3 or 4 while Leipold’s second Kansas team raced out to a 5-0 start and back into the national polls.

With momentum already on their side, the KU administration announced a one-year extension for Leipold before the season opener in September. That added a year to his initial six-year deal, which he signed in April 2021 that included an escalating annual salary that would pay him $16.5 million total, or an average of $2.75 million per year.

Leipold, who has led the long-suffering program to bowl eligibility in just his second season in charge of the program, has said throughout the season that his intention is to be at KU for a long time. Now, he has agreed to a new deal that will make that a certainty.

In doing so, it puts an end to nearly constant chatter about Leipold as a hot candidate at both Nebraska and Wisconsin, schools he has significant ties to from the past.

Leipold came to KU from Buffalo, which he led to its own significant turnaround after guiding Wisconsin-Whitewater, his alma mater, to six Division III national championships in eight seasons.

Leipold’s wife, Kelly, was the first to hint at the Leipolds staying in Lawrence long term, when she tweeted earlier a thank you of sorts for the “memorable” 2022 season, adding, “Can’t wait to be back at The Booth next season.”

While Leipold staying is significant news for the direction of the program that has returned to being a competitive program on an almost week in and week out basis, it may be even bigger for the future of KU's stadium renovation plans.

In October, KU announced a massive project with plans to overhaul the entire area surrounding the northeast corner of the current David Booth Kansas Memorial Stadium location. Support for both Leipold and the current direction of the program under him has played an important role in KU's fundraising efforts tied to making the project come to life.

Kansas will close out the 2022 regular season at 7 p.m. Saturday, when they travel to Manhattan to take on No. 15 Kansas State on FOX.