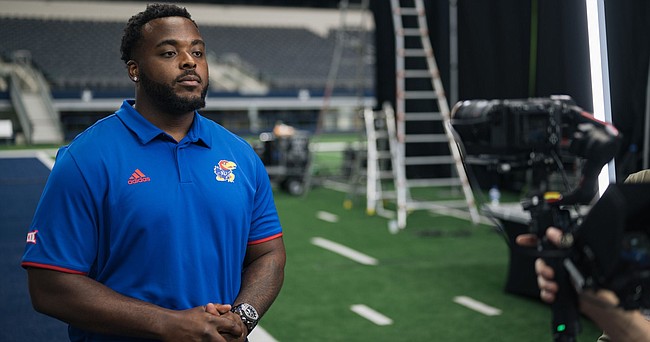 Photo courtesy of the Big 12 Conference

Kansas defensive lineman Caleb Sampson films a commercial for the Big 12 Champions for Life campaign last summer. Sampson was chosen for the project to represent all of KU student-athletes.

During the first 11 games of his super-senior season, Kansas defensive tackle Caleb Sampson has operated with the type of disruptive demeanor that defensive linemen are expected to have.

His impact on this roster, however, has gone well beyond his tackles, sacks and pass break-ups.

Sampson’s mere presence on the roster has been a big part of the culture change that has taken place at Kansas, and Sampson’s teammates have a great deal of admiration and appreciation for the way he works and the type of teammate he is. 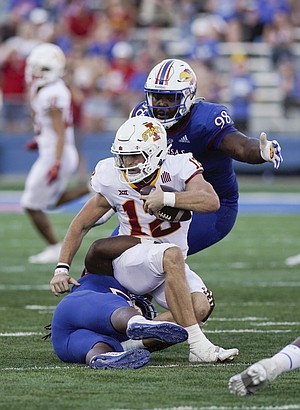 They aren’t the only ones. Earlier this season, Sampson was chosen by the Big 12 Conference as one of 10 student-athletes for their Big 12 Champion for Life campaign.

Last summer, Sampson traveled to Texas with the team for Big 12 media days to film a commercial and participate in the campaign. That commercial has played throughout the season on various networks during Big 12 football games, and Sampson said he often has received texts from friends and family members who saw it. He has yet to see it, but he has lived it.

“Caleb’s just a guy that actually fully knows himself,” said KU’s sack leader, Lonnie Phelps Jr. “He knows how to make a situation better. I look up to him because I see how he carries himself and I just want to carry myself like that and be cool like Caleb. There’s a guy like that on every team, and we just need more of those guys. It wouldn’t be bad to have 11 guys like Caleb on the field.”

A native of Saint Rose, Louisiana, the 6-foot-3, 305-pound lineman has experienced a lot of adversity in his life, including multiple hurricanes impacting his friends and family members.

“He’s handled changes in his life and uses them as well as anyone I have ever seen,” KU coach Lance Leipold said. “He’s just a great example. He doesn’t say a lot, but when he does, it’s well respected. It’s heard.”

Sampson remembers when he first heard about the Big 12 Champion for Life recognition because he didn’t really get it.

“At first, it was just like, ‘Wow, I’m being recognized for just being a genuine person,’” he said. “It’s really just me being myself.”

The more he learned about the program, though, the more he began to appreciate what it meant, both for him and for the school he represents.

The fact that he was being chosen not just as a representative of the football program but to represent the entire KU student-athlete population was something that really hit him.

Sampson credits his parents for being the examples for him and his brothers that he tries to be for his teammates, but none of it is ever something he’s had to work that hard to do.

“It’s how they came up and how they raised me and my brothers,” Sampson said. “The way they go about their lives, that’s just how I go about my life. I know I have teammates that are watching and are kind of inspired by that, even if they don’t say anything.”

One teammate who has said something was taken by Sampson’s presence the minute he arrived on campus. Even though Sampson plays on the defensive line and Lawrence native Devin Neal is a running back, the two have had plenty of interactions and opportunities to join together to try to help get KU’s program headed in the right direction again.

“He’s meant everything,” Neal said. “He was kind of one of those first guys I (went to) and learned from. He really gave me a lot of advice last year, and even this year I’m still learning more and more from him. He’s taught me a lot.”

While a lot of the lessons he passes on have been by example and easy, Sampson has been more intentional about one particular thing.

“It’s important for me to show other Black student-athletes that you have power and you have influence,” he said. “It’s just up to you to go and do it. I feel like that’s the most important thing that I've learned.”

“Appreciate all those guys,” Leipold said. “All of (them) have been very impactful to this program.”

I have a great deal of respect for Caleb Sampson and others like him. I like that he helps other Black players understand their power and their influence. I hope he also understands how he can impact all players in the same way, regardless of race or any other factor. I wish you well in whatever direction you choose for your future, Caleb Sampson.

It's so important to have inspiring players like that. And he has a great name too, as Caleb to me signifies strength and calmness.

Since there's no other place to make this comment...the time for next game is wrong. It's not noon, it's 7pm on Fox.

Congratulations and Thank You to all 12 Seniors who will be completing their final season as Jayhawks!

It is concerning that 6 of these players play on the defensive line.

Coaches P&O will have their work cut out for them, to maintain current depth and develop future talent.