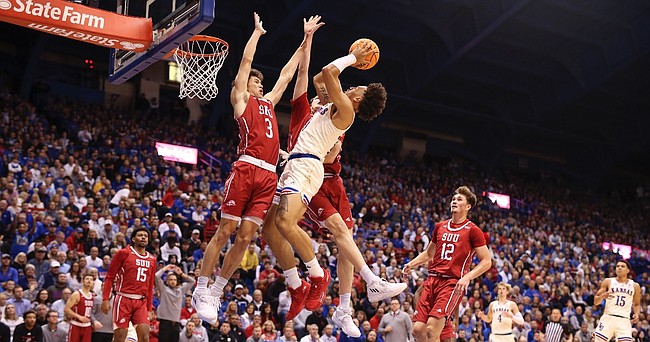 Jalen Wilson scored a career-high 33 points and No. 6 Kansas survived a letdown against Southern Utah, hanging on for an 82-76 victory on Friday night.

Wilson set a career best for a second straight game after scoring 25 points in the Jayhawks' 69-64 win over No. 7 Duke in Indianapolis on Tuesday night. The Thunderbirds (3-2) didn't figure to provide as tough a challenge, but they hung with Kansas (4-0) until the final minute at Allen Fieldhouse.

“He was terrific,” interim coach Norm Roberts said. “He was really efficient. He made some big plays for us.” 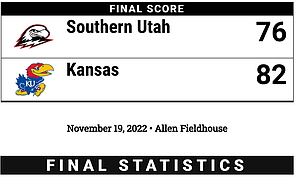 That was about it for praise from Roberts after the game.

“We weren’t very good, but give them credit,” he said. “They played really well. They made some key shots. We were just off in everything we did.

“They played exactly how we thought they were going to play. We just didn’t have good body movement and we talked about that before the game. We had so many ill-advised turnovers that they did nothing to cause. We’ve got to clean up a lot of that.”

The Jayhawks had their biggest lead of the game, 77-69, with 2:11 remaining. Southern Utah responded with a 7-0 run, including five straight points by Tevian Jones, to get within one point with 1:03 left.

Gradey Dick's 3-pointer with 40.6 seconds remaining made it 80-76 and Southern Utah didn't make another basket.

“I knew it was a close game, obviously,” Dick said. “KJ (Adams) got the offensive rebound. I felt open and took the shot.”

Roberts coached his final game for Kansas in place of Bill Self, who served the last of his school-imposed four-game suspension stemming from recruiting violations first uncovered in a federal investigation.

He said he's not concerned about how the Jayhawks will respond to their close call. 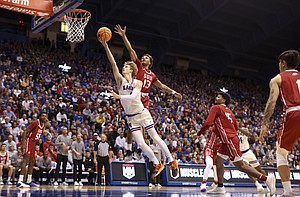 View a photo gallery from Friday night's game between the Kansas Jayhawks and Southern Utah Thunderbirds at Allen Fieldhouse.

“We always turn negatives into positives,” he said. “I know Coach (Self) can’t wait to get into practice and get that started. It’s always good when you can get a win and learn from a win, rather than learning from a loss.

“Tonight was definitely one of those games.”

The Jayhawks got 18 points from Dick and 14 from Dajuan Harris.

Southern Utah outrebounded Kansas 45-41, including 14-6 on the offensive glass. The Thunderbirds hit four of their first seven 3-point attempts to build a 22-16 lead in the first half. Wilson had the final two baskets before halftime to give the Jayhawks a 41-39 edge.

“I was just trying to get the ball moving and get to the paint,” Wilson said. “I didn’t want to settle for shots. That’s something we emphasized. We knew they didn’t have any shot-blockers, so we decided to attack the paint.”

Southern Utah: The Thunderbirds were not intimidated. They answered every early Kansas run and led in the final minute of the first half.

Kansas: The Jayhawks need another scorer besides Wilson and Dick. The duo scored 27 of the team’s 41 points in the first half and finished with 51 of the Jayhawks' 82.

Southern Utah: Heads to the Islands. The Thunderbirds will face Texas State next Friday in the opening round of the North Shore Classic in Laie, Hawaii.

Kansas: Plays North Carolina State Wednesday in the first round of the Battle 4 Atlantis in the Bahamas.

Hat's off to Southern Utah!

I agree, Doug. SUU was better prepared, better coached, and better disciplined than KU was. The more talented team prevailed, but the better team did not win tonight.

Second game in a row we gave up a bunch of OR.

FT could definitely be better. Previous teams have shown significant improvement through the season. It should be easy for the players to work on FTs on their own.

While it’s great that Jalen is doing so well, it doesn’t seem like a recipe for success if he is dominating the O.

I wonder how much will change with Coach Self back.

1] Let me pause as my heart rate settles down to 100 beats per minute!!

2] We are going to be in soooooooo much trouble against a team with a couple of competent big men.

3] I second Doug's post....great job by the Thunderbirds.

4] I also second Dirk's comment. An offense dominated by a little guy, a freshman and a guy who can have strings on inconsistency is a little daunting.

5] Not totally unexpected tonight...a game before a holiday break, getting ready for a destination tourney, against an unknown opponent....it could have happened. The good news is the team didn't let it.

6] I thought that since we won the National Championship, I would be happy with an entertaining competitive team this year. I was wrong!! I want KU to win it all again.

7] For the fiftieth time it's Grady Dick, Not Brady Dick!!

2] You mean like Duke? I think our team is falling in to the trap of playing to the skill level and intensity of the opponent. Rather than imposing our will on the other team, we kind of match what they do and try to beat them at that level.

I'm not sure that it's accurate to say that we were playing down to SUU's level, because SUU was playing at a very high level last night. Their aggressiveness reminded me of a Roy Williams-coached team from back in the day. It made me think of Norfolk State's upset of Missouri in the 2012 NCAA Tournament.

One could say that KU was playing down to Pittsburg State's level during the first ten minutes of the exhibition game earlier this month, but we can't really say that about SUU.

Ah yes. I remember the Norfolk State upset of Missouri fondly. Thanks for a great reminder of that game!

The same challenge every year for the coaching staff: offense, offense, offense. It seems like it's always an uphill task for them to get it together in the first 3/4 of the season. We've got 3 capable dunkers, 3-4 capable shooters, but yet they labored to make baskets. Wouldn't it be nice to see lobs instead of ooops (borrowed from Bahe)? How about the repeat of moving screen syndrome year after year after year? That shows staff really need to make pick and pop, screen and dunk part of regular offense, instead of just 1-on-1 uphill battle after a looong infamous side to side passes. But, hey, we won it all last season, as Tony said. Who cares if our defense can carry it all the way this time.

For the first time, I did not bother to research the opponent before a game. I looked at the name and point spread projected by the experts and figured it would be a relaxing night at Allen Fieldhouse. KU got beat to most lose balls and gave up too many second half points. Then I looked at the scores of southern Utah and they were averaging over 100 per game including 126 to 67 and 117 to 55 victories. I don’t care if you are playing a high school team those numbers are impressive. The took more shots than KU and blew past KU defenders. Not until the very end when Harris drew a charged had KU competed in the open floor defensively. Lucky to get a win. Rock Chalk.

-We all knew this was a hangover game. Sandwiched between Duke and the Bahamas, the team was always going to struggle in this game. Glad we got the W!

-Something we also knew going into this game: we are the top game on almost every team's schedule. As the defending national champs, we will get every team's best shot. Every team will come with intensity and purpose.

-Norm did a great job as interim. I hope his voice comes back soon! He sounded like a drill instructor at Marine Recruit Depot!

-There were way too many plays that our guys just gave up. One example was when Wilson had the ball stolen, he chased the fast break and tried to block. The SUU player missed the layup but he had 4 teammates right there to get the rebound. Not a single other KU player pursued the fastbreak. It's like they resigned the point and didn't fight. I imagine HCBS is going to 'address' that very quickly.

-The refs really let the game become overly physical. There were a ton of no calls. They were fairly consistent, so that's at least a positive. I'm not a fan of refs who allows the game to become so rough.

-We know for sure now; Harris and Wilson are the team's leaders. They both did what had to be done to secure the win. It's great to see such leadership and poise from these two players.

Agree with you on Norm Roberts. I expected KU to go 3-1 and lose the Duke game on his watch. The fact that he went 4-0 in Self's absence, including defeating Duke, is a testament to his coaching abilities and how fully on board he is with Self's system.

"Brady" Dick is averaging nearly 17 pts a game in his first 4 games. In most seasons, that would be a team-high average and he's only an 18-year-old freshman.

With Jalen being totally courageous on the path to landing somewhere on the All-American list and Harris averaging 9 pts a game, I think we are on a great glide path. We've had difficult games with inferior competition before and have gone on to end near the top of the heap nationally. The coaches will be able to use a lot of this tape to correct things going forward. Not worried about all the turnovers we witnessed last night.

I'm still as encouraged as I was after the Duke game. Looks like we will land at no. 4 on the AP list after this week.

Can't wait for the upcoming Tourney this next week. Also, I've grown to love the awesome Mr. Norm, but really looking forward to seeing Bill on the sidelines.

SUU played a solid game and dropped 5 for rebounds on the offensive boards. If they do that we need to block out and hustle to meet the defensive matchup. They executed and so did we.

Gradey is solid shooter and will get better. Self will get McCullar settled as a defender and a scorer.

“Jayhawks need another scorer besides Wilson and Dick. The duo scored 27 of the team’s 41 points in the first half and finished with 51 of the Jayhawks' 82.”

IMO, KU needs to play under greater control and that in itself will reduce turnovers. For example, on the lob plays, if the passer had not sped up their lobs, the bigs would’ve picked up at least two inside baskets.

McCullar and Rice should be more effective scorers.

Wow. Looks like I was wrong re the projected rankings. Kenpom - 10, CBS Sports 25 and 1 - 4, AP & Coaches poll - 3! Not sure I am ready to go, presently, all the way to 3. Lots of pressure, plus we did almost lose against a team I have near heard of at home! That said, we did get 1 vote for first place in the AP. (Thank you, Matt.) Texas got 5 first-place botes but managed to be ranked right below us.