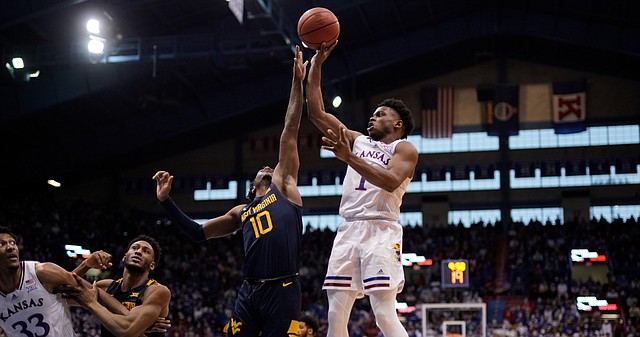 As the Kansas men’s basketball team awaits the final stay-or-go NBA draft decisions from Jalen Wilson and Kevin McCullar Jr. — both are expected sometime Wednesday — the Jayhawks who have been on the path to returning are preparing for the start of summer workouts.

Kansas coach Bill Self told the Journal-World on Tuesday that workouts with KU's returners are slated to start Monday, with the incoming freshmen trickling in throughout the week, as well.

Kansas was one of a handful of Division I schools that did not have at least one player enter the transfer portal this offseason, meaning that, even with the departure of so many upperclassmen, the 2022-23 Jayhawks still will have a handful of familiar faces on the roster.

What those players do, how quickly they develop and how ready they are to take on the ownership role for the defending national champions will go a long way toward determining how next season goes. They will get some help in the form of the four-man freshman recruiting class ranked No. 3 overall by Rivals.com, but that quartet will need at least a couple of players to show them the Kansas way.

Although he played sparingly throughout the 2021-22 season, Yesufu was always a factor and a potential option off the bench. He filled in with big minutes in a couple of key spots and spent much of the season learning how to play in the Kansas system and figuring out what KU coach Bill Self wants from his players.

With that knowledge, and a year of familiarity under his belt, Yesufu believes he has the potential for a breakthrough next season.

“I’m very motivated,” he said this spring. “I can’t wait to get back in the gym. I know what I need to work on, and you guys are going to see a different me next year.”

Yesufu appeared in 34 of KU’s 40 games this season but averaged just 9.3 minutes per game because of KU’s loaded lineup ahead of him. That came after he averaged 13 points in 24 minutes per game one season earlier at Drake.

His season-high for playing time came when he played 23 minutes in a road win at Iowa State. That sparked a stretch of double-digit minutes in eight of the next 10 games. But because of the depth of KU’s more experienced players, Yesufu never could hold down a regular spot in the rotation.

Next season, with Kansas looking to replace 91% of its scoring if Jalen Wilson stays in the draft and 78% if he returns for his junior season, Yesufu will have an opportunity to pick up some of that slack.

“I think he’s just got to be a scorer,” Self told the Journal-World on Tuesday. “Everybody can say point guard because he’s short, but the bottom line is he’s a scorer.”

Never one to lack confidence in his ability, Yesufu’s focus this offseason has been more on how he can help KU replace the departure of so many leaders, from Ochai Agbaji and Christian Braun to Mitch Lightfoot and Remy Martin.

“I feel like I’m in the gym enough that my game is going to speak for itself and whatever I do in workouts is going to transfer to the game,” Yesufu said. “I’m not worried about that. I’m just focusing on leadership and leading us back (to another parade).”