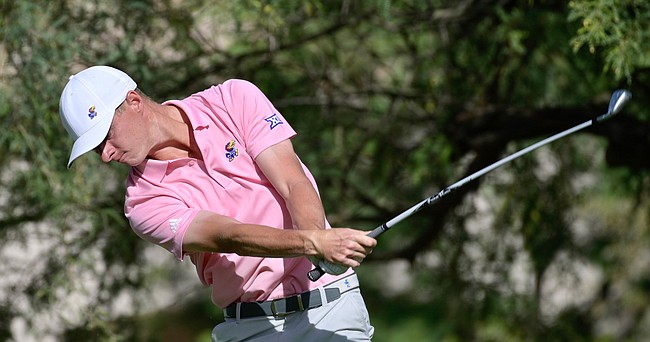 Kansas golfer Harry Hillier follows through during a shot at Grayhawk Golf Club in Scottsdale, Arizona, during the third round of the NCAA Championships on Sunday, May 29, 2022.

The Kansas men’s golf team finished Round 3 of the NCAA Championships on Sunday in 17th place at +40 overall after shooting a 17-over 297 at Grayhawk Golf Club in Scottsdale, Arizona.

The final score ended the Jayhawks’ season three strokes shy of cracking the top 15 and qualifying for Monday’s round.

Georgia Tech and Mississippi were the final two teams to get inside the cut line, tying for 14th at +37. Texas A&M finished two shots back at +39 and the Jayhawks were three off the cut at 40-over for the tournament. 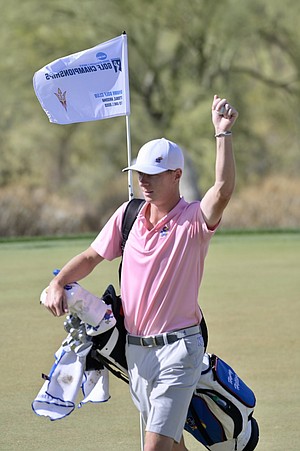 Kansas golfer Harry Hillier celebrates after recording a hole-in-one on the 13th hole at Grayhawk Golf Club in Scottsdale, Arizona, during the third round of the NCAA Championships on Sunday, May 29, 2022.

While the end came sooner than the Jayhawks would have liked, there’s no disputing the 2021-22 campaign as one of the best in program history.

Jamie Bermel’s club won five tournaments, reached the NCAA Championships for just the 13th time in school history — and second since 2001 — and delivered the program’s best round ever at the NCAA finals with Friday’s 6-over 286.

“It was a record-breaking year for our team,” Bermel said Sunday. “The seniors — Ben Sigel, Harry Hillier and Callum Bruce — were a big part of the team. Ben and Harry have played a lot of golf for the Jayhawks and did a lot of great stuff. Callum only played one year as a graduate transfer, but he was an absolute joy to coach and fit in well with our team.

“We’re obviously disappointed to see our season come to an end for the team. We didn’t have our best stuff today.”

While the Jayhawks are done in the chase for the team title, Bruce is still alive in the individual competition. He ended Sunday tied for 49th in the individual standings at 9-over through three rounds. He advanced to Monday’s fourth round as one of the top nine players on non-advancing teams. Bruce shot a 78 on Sunday after carding an even-par 70 in rough conditions on Saturday.

Hillier provided the highlight of the day for Kansas, with a hole-in-one on the par-3 13th hole.

Hillier also had the best score of the day for the Jayhawks with a 2-over 72. The senior knocked in the second hole-in-one of his Kansas career with a six iron on the 230-yard par-3 13th. He also carded two birdies during Sunday’s round and finished at 13-over for the tournament.

During Sunday's round, the Golf Coaches Association of America named Hillier to the Division I PING All-Central Region team. During the 2021-22 season, Hillier posted one win, two top fives, one top 10 and three top 20s to lead the Jayhawks.

Sophomore Luke Kluver finished Sunday at 13-over for the tournament after recording the second-best round by a Jayhawk on Sunday with a 73. Sigel finished at +15 overall and shot a 77 on Sunday, while Duquette ended at +17 over with a third-round score of 75.

As one of a handful of qualifying individuals on teams that finished outside of the top 15 on Sunday, Kansas senior Callum Bruce closed his KU career with a 4-over 74 on Monday at the NCAA Championships at Grayhawk Golf Club in Scottsdale, Arizona.

The round, which was four shots better than his Round 3 score, featured four birdies and was tracking toward a sub-70 score before Bruce carded a triple bogey on his 15th hole of the day and a double bogey on his 16th. He followed that up with a three-hole stretch of par-birdie-par to finish with a 74 and in a tie for 47th place at 13-over for the four-round event.

Bruce calmly drained a 6-foot putt for par on the his final hole on Monday to bring to a close the 2021-22 Kansas men's golf season.

Our guys finished ahead of quite a few higher ranked teams, so every reason to applaud the effort. Congratulations for an exceptional season, Jayhawks!

Glad Harry had a better finish after a really tough day yesterday. Probably tough to finish so close but not make the cut. Still a great year.