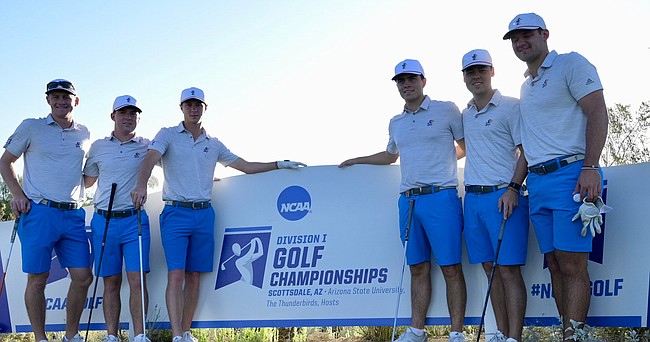 The Kansas men's golf team poses for a group photo in Scottsdale, Arizona, before the start of the 2022 NCAA Championships.

The Kansas men’s golf team opened the 2022 NCAA Championships at Grayhawk Golf Club in Scottsdale, Arizona on Friday, by recording a school-record team score of 286 to finish at 6-over par for the day.

Appearing in the program’s 13th NCAA Championships event, the Jayhawks finished tied for the second-best score of the 15 teams that went out in the morning wave. By day's end, they were still tied for fourth overall, just four shots back of Vanderbilt, which shot 2-over to take the Day 1 lead.

“I thought we got off to a good start,” Coach Jamie Bermel said. “Callum (Bruce) was slow out of the gate, but finished well. Harry had a really good round. Six-over is a decent score out there. There’s a lot of golf left out there. You can’t win it on the first day, but you can shoot yourself in the foot. I thought we were pretty solid.”

“I got off to a hot start — stuffed it on the first — had a good putt on the second and got the momentum rolling,” Hillier said. “The course is tough. You have to keep it in play. You have to hit it on the right side of the hole…I ran into a little trouble in the desert; bogey, birdie, bogey, birdie, but it was a good grind out there. The guys did well, so we’ll come back tomorrow and do it again.”

Behind Hillier, Bruce fired a 1-over 71, while sophomore Luke Kluver shot a 73. Senior Ben Sigel shot a 74 and sophomore William Duquette posted a 5-over 75. Bruce is tied for 16th, while Kluver is tied for 42nd. Sigel is tied for 62nd, and Duquette is tied for 101st. The event has a field of 156 golfers.

KU will resume play in the 30-team event on Saturday. All 30 teams will play the first three rounds in a stroke play format. There then will be a 15-team cut after Sunday’s third round. Following the fourth round on Monday, the final eight teams will advance to match play format on Tuesday to determine a champion.

Dang! A heck of a nice day for the crimson and blue. Keep her going, men.

starting monday theyre on tv. get to the match play!! rcjh!