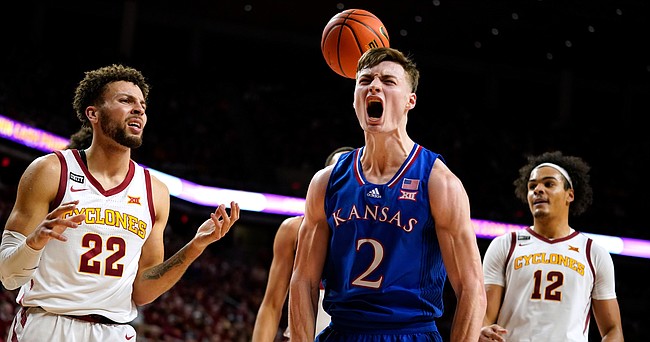 Kansas junior Christian Braun is staying in the NBA draft after making what his mother, Lisa, called “a tough decision” to forego his senior season at KU.

“He loves KU, but we’re happy for him to start the next chapter,” Lisa Braun told the Journal-World via text message on Tuesday night. “Once a Jayhawk, always a Jayhawk.”

Braun’s decision to officially enter the 2022 NBA draft — June 23 in New York — comes a little more than one week before the deadline for underclassmen to pull their names from the draft pool while still retaining their college eligibility.

Shortly after news surfaced that Braun was officially done at Kansas, WME Sports, the talent agency which recently signed on to handle all of the name, image and likeness deals for incoming KU freshman Gradey Dick, announced that Braun had joined the agency, as well. BDA Sports, which dubs itself a global marketing agency for professional basketball players, also is part of Braun’s representation team.

"While I am extremely excited for what the future holds, I would be lying if I said this wasn't a hard decision," Braun wrote. "I have a deep love for Kansas, my teammates, the coaching staff and our fans. I hope you saw that passion every single game."

Projected as a mid-to-late first-round pick by many mock drafts, Braun helped his case tremendously by putting on a strong showing at last week’s NBA combine.

In addition to recording the third highest vertical jump at the entire combine — one inch better than teammate Ochai Agbaji in fourth place — Braun also filled up the stat sheet in different ways on the two days of scrimmages. On Day 1, he scored just six points but showcased his all-around game by recording seven rebounds, six assists and four steals. On Day 2, he showed he can score, too, by tallying 17 points.

Those performances, along with the positive feedback that Braun and his family and representatives received from NBA scouts and executives led to him making the decision to turn pro.

After one of the scrimmages in Chicago, Braun was asked by an in-house NBA Draft Twitter account what he thought he showed the dozens of eyes watching the draft prospects. He responded by saying simply, “I think I showed that I was a true athlete.”

That fact, along with his fire and passion for the game, will likely be the biggest reason he gets drafted in this June’s draft.

His departure opens the door for Kansas to add at least one player this offseason. Texas Tech transfer Kevin McCullar Jr. said last week that he will come to KU if he pulls his name from the draft, and, at 6-foot-6, 210 pounds with good athleticism and toughness, he would make a good replacement for Braun on KU’s 2022-23 roster.

With Braun and KU teammate Ochai Agbaji staying in the draft, all eyes now turn to McCullar and Jalen Wilson, who both have until June 1 to make their decisions about next season.

Wilson joined Agbaji and Braun at the NBA combine last week after earning an invitation by playing well at the NBA’s G League Elite Camp earlier in the week.

Unlike Braun, Wilson has not shown up on any of the major mock drafts in recent months, which makes his return to KU for the 2022-23 season at least a little more likely than Braun’s was. Wilson continues to workout for NBA teams and likely will for another week while he mulls over his options of making the jump to the professional ranks or returning to KU to help the Jayhawks defend their national title.

As for the Braun family, Lisa, who has been like a second mother to KU point guard Dajuan Harris Jr. said they weren’t quite done at KU yet.

“I will be in the stands cheering again next year,” she said.

Added Braun in his farewell announcement: "While I may not be at Kansas next year, Lawrence will forever be home. Now it's time to continue to work and take everything I learned at Kansas to make myself the best I can possibly be. I hope to make you all proud and cannot wait to represent Kansas basketball at the next level."

None by Christian Braun

sad, yet happy and proud.

really hoped he'd be a four-year guy. thought he would be. good for him, though!

would be nice, joe.

CBs intensity will serve him well.

It would have been great to have his leadership next year. Others will have to step up.

I'm not normally a fan of players leaving for the NBA before they complete their college eligibility. That said, given that Christian Braun helped us win the NCAA championship, and given that we may get slapped with a postseason ban for next season over all that FBI bullcrap, in Braun's case, I'm okay with him leaving early.

I think there is more empathy for the student-athletes who were not involved in past misconduct. I would be surprised if KU gets the same treatment as Oklahoma State. More likely to see the penalty leveraged against Self and Townsend and a reduction in the number of scholarships.

Good luck Mr. Braun (pronounced Brown which has always been confusing since I had a MD/PhD student Braun in my lab which was pronounced as spelled – although he was from KState). With his boundless self-confidence, maybe CB can develop into a Luka Doncic-type player.

This is definitely the right decision, just as returning will be the right decision for both Wilson and McCullar. We'll miss so much about CB, from what he added to the stat sheet, to his monstrous intangibles like passion, drive and competitive fire. I wish him all the best!

Wishing him the best in the future and thankful for all he has contributed to the past.

Andy, it is really quite simple. The German language pronounces "au" as "ow". If you are stubborn enough, you can constantly correct people. Sports announcers were educated, all but another CB, Charles Barkley.

Always have said anyone that can get a degree in 3 years instead of 4 or accelerate their MBA from a 2 year to a 1 year should take advantage of it. So when a basketball player gets his NBA in 2 or 3 years instead of 4 or a football player gets his NFL in 3 years I stand up and cheer, because the school did exactly what it was paid to do, prepare the individual for life and for their next job.

Good Luck CB, we always like to see the success transfer to the NBA.

so I assume that it's pronounced as "Edvard Dowb"? Or the anglicized version "Edward Dob"?

I hope he gets drafted by the team with that Duke dickhead, Grayson Allen, so he can pound that punk in practice everyday and eventually take his position.

Not that I'm mad at Allen or anything. :}

Christian is listed as being drafted in first round by many mock drafts. His stock is probably not going higher.

Jalen on the other hand is not listed anywhere as even a 2nd round draftee, so logically he could profit a great deal by returning and really upping his game the way he has at the combine and then being drafted in first round after kicking ass all next year.

Terrible decision. I know it is unpopular, but just honest.

If he is wanting to go to contribute to a team in high in the standings with defense, and hustle...then yay good for him. If he thinks this a long term career plan...its not. We will look up on Sports-Reference in 10 years remembering he played here and there for a team for 3 years never to be heard from.

He still is not consistent shooter. He can't create his own shot for his size. He still disappears in the flow of a game. I know the tournament looked good overall for the team, but outside of his blocking skills on players smaller than him, he still has lapses of bad defense.

Adam - the average length of a career in the NBA is 4.5 years. So if Braun lasts only five years, he will have had a nice career. In addition, he's projected to go to the Warriors - which would be the exact fit you describe (not that the draft pans out anywhere near projections, but just saying).

Worst case scenario is that 3-5 years of "worldly" experience (traveling within a team bubble) would combine with 3 years of the same kind of experience in college, to give Christian an amazing 6-8 year foundation on which to build the rest of his life.

Honestly, I think it's an excellent decision.

His stock is about as high as it will get. The fact that he is really well-rounded is what the NBA is looking for.

However, I'm shocked he's going for the NBA vice playing in Europe. After all, he's got the best Euro step...

I will miss him and hope that like some other former players, he finishes his degree. He has been fun to watch and improved each year. He seems to be a great guy. He has been a great asset for Kansas basketball. It was fun to watch a Kansas kid do so well. I wish him all the best!

He reminds me of Baker from WSU. Baker played a bit in the NBA then vanished. I think CB has more drive.

CB (& Jalen) would have been the alpha’s next year. He absolutely could have had an Ochai year, and been a lottery next year. That being said, except for not shooting lights out in the scrimmages, he’s had a really good combine from all reports. Even better though, he has the personal drive that will continue to elevate his game regardless of where he’s playing.

The plus side of going this year as a late first round pick vs potentially the lottery next year is that you’re probably landing with a better organization.

Jonathan, I am flexible, I was raised to insist on Dowb, but currently use Dob.

I also created Da-ub, as a two syllable version, they call me Kareem Abdul Da-ub.

Back to CB I was wrong on him, I thought he would be a second round pick.

He is now projected as a late first round pick, time will tell.

Good personal decision for Braun. Everything good has a risk attached. Self is happy, and confident he will continue to have and attract good players. Draft status should rise with Braun's departure. KU basketball will be fine.

I also thought he would be a 2nd round pick, but it seems most likely he'll be in the first round so staying in the draft would be the best percentage play for him.

It will get interesting though as everyone adjust to the NIL rules for the players who are more marketable as a college player who aren't likely to earn as much in the NBA even with their basketball contract combined with their marketing money.

Not saying that would apply to Braun, because he has the potential to make a lot of money in his career. But that guy Oscar T from kentucky is going to make upwards of $2MM as a college player next year. I don't know what the NBA rookie pay scale looks like at the moment, but $2MM not exactly chump change if you aren't sure you are in line for a guaranteed NBA contract.