Not yet withdrawn from the NBA draft, Texas Tech transfer Kevin McCullar Jr. commits to play for Kansas if he returns to school 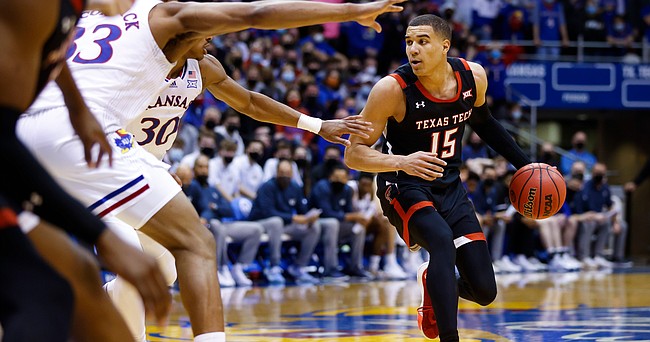 Although he plans to continue the process of testing his NBA draft stock through the end of the month, former Texas Tech wing Kevin McCullar Jr. revealed on Thursday night that if he returns to college it will be at Kansas.

That news came in a tweet sent by McCullar around 7 p.m. Thursday night that began with a heartfelt thank you to Texas Tech for his time as a Red Raider.

It then quickly shifted to his plans to attend Kansas, which he picked over Gonzaga.

“As I look to the next chapter of my career, if I decide to withdraw from the NBA draft, I am thrilled to say that I will be playing for Kansas and coach (Bill) Self,” McCullar wrote.

A 6-foot-6, 210-pound, all-conference-type guard, McCullar averaged 10 points, 5 rebounds and 3 assists per game in 29 games for the Red Raiders last season. He ranked second on the team in total assists and steals and also shot 31% from 3-point range. He played for four seasons at Texas Tech, redshirting as a true freshman.

Known as a stat-stuffer who leads with his defense, McCullar earned honorable mention all-Big 12 nods in each of the past two seasons and also was a Naismith Defensive Player of the Year semifinalists during the 2021-22 season.

ESPN.com ranks McCullar as the ninth best transfer currently available in the transfer portal, dubbing him "an elite defender."

McCullar recently attended the NBA’s G League Elite Camp but was not invited to stick around for the combine. In order to have room for McCullar, KU would need either Christian Braun or Jalen Wilson to decide to stay in the NBA draft instead of returning to school for the 2022-23 season.

All three players have until June 1 to withdraw their names from the draft pool in order to retain their college eligibility.

“At this stage of my life, KU offers me an opportunity to continue to improve my game while still being close to my family,” wrote McCullar, who hails from San Antonio. “I am extremely thankful and excited for this opportunity, to represent such a historic basketball program. It’s an honor of a lifetime.”

Whoa, a big transfer that already plays like a Bill Self guy. It still feels like Braun is gone, but maybe the pickup games at the combine will push the decision one way or another. Unless Wilson is just ready to leave college, I bet he'll be back.

I don't get the hype around this guy. He's a 40/30 shooter and hasn't looked good at all at the g league games.

I don’t get the bazaro world reality towards an experienced all-conference player that’s nationally elite defensively.

40/30 puts him in the same ballpark as Wilson and Harris offensively. While he might not have performed well at the combine, there are other players that haven’t in the past and still excelled in the college game (Wilson).

It’s good for him to continue getting feedback and really isn’t a place for him until CB and/or Jalen stay in the draft. Still, there will definitely be a need for experience on next year’s team.

He'll be an all conference player with KU. His defense alone is worth the investment. On the perimeter with him and Harris, KU will be tough. I wouldn't expect a lot of scoring from him anyway. As long as he chips in offensively in and does all the other things he's great at, we as fans will be glad they got him.

Kevin might be forced to "walk on" at Kansas.

The theoretical question is whether "walk ons" can be compensated via NIL.

If the answer is yes, the scholarship limit is mute.

They can be compensated via NIL, just the same as scholarship players. Hence all the Teahan shirts out there being sold

McCullar will add a lot of experience and solid defensive ability to the Kansas squad. His shooting numbers will get a lot better in Self’s framework, too. Solid transfer.

There’s an interesting 24/7 article that digs deeper. Two things stood out that support Kevin having better #’s at KU. 1. Our O was much better at getting uncontested shots, 2. Kevin was shooting almost 38% earlier in the year before suffering an injury. Hopefully David’s experience, and even Remy’s, is fresh enough that we all can appreciate the difference between output and ability created by injury. Most players also continue to develop through their careers. The article also gets into the elite lateral quickness that makes him a great defender, 3/4 court speed that would continue to fuel our break, as well as pointing out that he had the second highest assist rate at TTU. A secondary ballhandler and the size to switch. Lots to like here.

Just to clarify my earlier, I like watching the true KU guys develop, that's the fun of it for me. When they bring in the 1 year guys it just seems like 1000 minutes that could have gone to KJ Adams, Clemence, or whomever else. I'd rather see those guys get those minutes and develop under this coaching staff. Just personal preference.

If McCullar comes to KU, I hope he works out for the Jayhawks as well as Remy Martin did!

I am constantly amazed at the high level of basketball savvy displayed by the responders on this web site. We may not always agree [well, actually we rarely all agree] but that's OK. Bryce, Dirk, "the Ladies", Rodney, Lance just to name a few help broaden the spectrum of information brought daily by Matt "The Great' Tait. I'm not sure about the rest of you guys but I still can't quite believe we actually won! Obviously getting married or having a child are top of the world experiences, but, for a diehard Jayhawk basketball fan and Kansas Alum, winning a National Championship is pretty darned amazing!!!

PS Oh yeah, I hope KMac is wearing crimson and blue next season!!

IDK, the NCAA has managed to wreck the game with this transfer portal and NIL. It just seems wrong that kids try to destroy a team during the season, then go play for them the next. I'm happy if we get him, but this transfer portal, as well as the NIL, are both messed up. I'd say at least not allow transfers to a team in the conference you are already playing him. Does anyone know why Tech is losing all these players? I thought their "new" coach who moved up when Beard left, was doing a good job.

Edward, any player that is recruited or was a former scholarship player cannot be a walk-on at that school or another school.

With his ball-handling skills (he played PG a lot for TTU last year), in combination with Wilson's ball-handing skills (he played PG a lot in his NBA combine game, and has shown his ability to grab a board and lead the break), you can expect a lot of "run and gun" offense out of KU next year. This is even more likely considering we've lost our best shooters (Och, Braun, Remy) and the only shooters left on the roster are unproven in college (Dick, Rice, Clemence, Cam Martin) so our best chance at making shots is to go fast and get layups.

Imagine him coming to KU and how much national attention the TTU/KU games will get because of the intensity added to that rivalry. We think it's intense now, it will be even higher if he comes to Kansas.

He’s Marcus Garrett type player that is fundamentally sound. He will be a solid 1-3 type player. He will be a slightly less shooter than Vick. It will take him a bit to get Self’s system. He will solid and experienced 6 man. We could use a solid defender with Harris. I’m curious to see how KJ gets in the mix. This team has a chance of becoming a more solid and consistent defensive team.
This team will be solid and McCullar could be a key portal get like Martin after losing what appears to be some experienced players.

@Leiker He will not take PT from Clemence or KJ. I liked KJ’s upside. Clemence has a ways to mature. Clemence has potential to be a tough matchup. I’m hoping we have enough firepower but he seems to be a slightly better version of Lightfoot.
KJ will be key in DMac’s departure. Clemence and KJ will be a nice inside presence. I’m not expecting Udeh and Edjifor to do much. Rice is going to be special. Dick could be B12 newcomer.
I expect Braun and Wilson to be gone. I expect McCullar to be at KU and Self is likely driving his decision. Don’t forget B12 additions: BYU, Cincy, Houston, and UCF. I welcome Houston. Kelvin Sampson is back in the B12 and OU is gone. 😂

Expect Self to go small ball when necessary.

The new teams aren't coming to the Big 12 next year...

KJ should be a 4, not a 5, moving forward. He's no taller than Braun and not an elite rebounder so he's not really suited to be a 5 full-time. He's an elite defender 1-4 and undersized as a defender against a 5. Better get that jumper working (his social media makes it appear as though he's working on jumpers and drives exclusively).

McCullar will be starting.

Wilson should be back.

Shannon - Where are you getting the info that a player can’t be a walkon once he’s been awarded a scholarship? I thought we had a situation a decade ago where one of the players was supposedly offering to give up his scholarship, essentially become a walkon, in order to free up a scholarship for a high level recruit.

Agreeing very much about KJ. It appears the 5 will be Cam, Clemence, and Udeh.

We can’t forget about Pettiford. He likely won’t take the start from Harris, but he was really coming on strong at the end of noncon before getting hurt.

If Wilson doesn’t return, there’s another transfer spot available. Sounds like CB has done enough at the combine and workouts to build on his KU performance to be gone.

It's in the NCAA bylaws. Since their rulebook is 1000 pages long I'm not going to dig for it. It's to prevent schools from "stockpiling" talent and keeping them from going to other schools, and to prevent "shady" dealings where a talented kid is a "walk-on" but a booster is paying their tuition. You can obviously go from walk-on to scholarship but not the other way around.