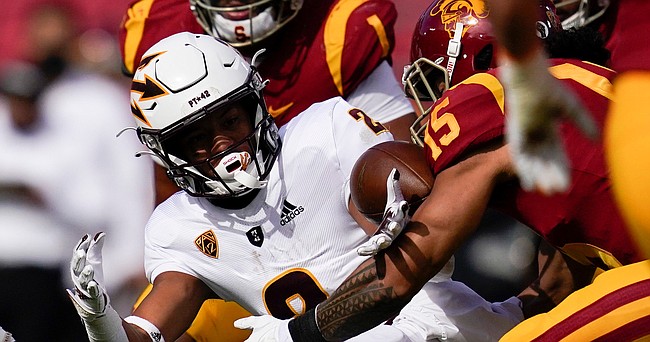 This story has been updated.

Former Arizona State wide receiver LV Bunkley-Shelton committed to transfer to Oklahoma late Wednesday after he wrote on Twitter earlier in the day that he was choosing between the Sooners and Kansas.

"It was honestly just a gut feeling. That's what it came down to," Bunkley-Shelton told 247Sports. "I liked both coaching staffs and both campuses a lot and had two really good visits.

"OU just stuck out a little more for me. They came after me hard right when I went into the portal and made me feel like a priority. I really liked it there. It's a big-time program and I think I'll fit in really well there."

Bunkley-Shelton, who is 5-foot-11 and 195 pounds, took an official visit to Kansas last week, one week after he did the same at Oklahoma. A four-star recruit out of Los Angeles in the Class of 2020, he was ranked the No. 86 player in the country and the No. 16 player at his position, according to Rivals.com, and played in the US Army All-American Bowl.

He caught 33 passes for 418 yards and two touchdowns while starting seven games as a redshirt freshman for the Sun Devils last season. He had four catches for a season-high 76 yards in the win over Colorado and matched a season high with four catches in the Las Vegas Bowl loss to Wisconsin.

He also played in all four of Arizona State's games during the abbreviated 2020 season and caught 11 passes for 100 yards, but by playing in just four games, he was able to use his redshirt year.

Bunkley-Shelton, who decided to transfer from Arizona State two weeks ago, had scholarship offers from Michigan, Ohio State, Florida State, Florida, Oregon, USC, Texas and many others after graduating from Junipero Serra High in Gardena, California.

A commitment from Bunkley-Shelton would have been a significant addition for the Jayhawks, who lost Kwamie Lassiter II, their leading receiver last season as a sixth-year senior. Four experienced wide receivers will return in Lawrence Arnold, Trevor Wilson, Luke Grimm and Steven McBride, and Minnesota's Doug Emilien decided earlier this month to transfer to Kansas.

Several of Arizona State's top players have chosen to transfer since the end of last season. Quarterback Jayden Daniels, a three-year starter, chose to transfer to LSU, and another starting wide receiver, Ricky Pearsall, has also left the program. Another player whom Kansas was watching, right guard Spencer Lovell, decided last week to transfer to Cal.

This would be big in many ways: 1. Fill a need 2. Get a UA-AA 3. Develop a point of contact with a quality HS 4. Steal a recruit from ou.

The probability of "landing LV" is roughly 50%, if you run the math.

Oops, what a bunch of bunk.

I wish him luck (except against us) but suspect he would have had a whole lot more media attention playing at Kansas than he will have buried at OU. For us, WR is a position of big need and he would have been a definite standout iwth potentially big numbers. Just my opinion.