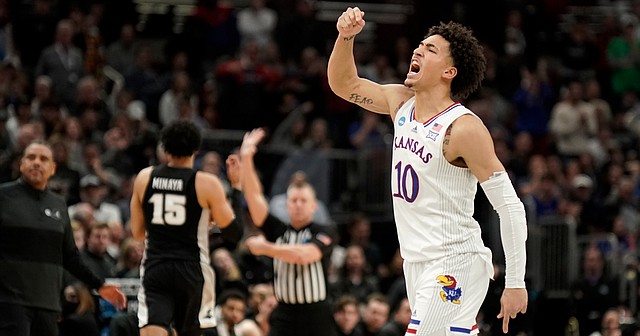 Kansas forward Jalen Wilson (10) pumps his fist as the Jayhawks take control late in the second half against Providence on Friday, March 25, 2022 at United Center in Chicago. The Jayhawks defeated the Friars, 66-61.

Kansas forward Jalen Wilson has been invited to attend the NBA’s pre-draft combine after a strong showing in the two-day G League Elite Camp this week in Chicago.

Wilson, who led all scorers with 18 points in the first scrimmage of the week on Monday, followed that up with a team-best 13 points in a loss on Tuesday.

Wilson shot 4-of-9 from the floor overall and 3-of-5 from 3-point range, giving him seven 3-point makes in 11 attempts in the two G League scrimmages.

Given that his outside shooting was one of the bigger question marks surrounding Wilson’s game heading into the draft showcase week, it makes sense that answering it with a strong showing would earn him the call up to the full combine.

He’ll join KU teammates Ochai Agbaji and Christian Braun at the combine, which begins Wednesday and runs through the weekend.

Fellow KU teammate David McCormack was on the winning side of Wilson’s scrimmage on Tuesday. McCormack, who did not get asked to stay, finished with 6 points and 3 rebounds on 3-of-5 shooting in 17 minutes off the bench. The performance resembled what he did on Monday.

Seven of the 44 players invited to the G League camp got asked to say, three more than last year’s total.

While the accomplishment is big news for Wilson’s draft hopes, the latest ESPN.com mock draft still did not have his name listed among the 58 picks in this year’s draft.

Posted by draft guru Jonathan Givony shortly after Tuesday night’s draft lottery drawing, the latest ESPN mock draft featured Agbaji going 15th overall (one pick out of the lottery) to Charlotte and Braun 28th overall to Golden State late in the first round.

Agbaji has been a solid first-round projection throughout the past several months. Braun has teetered between late first and early-to-mid second round status. His showing this week will go a long way toward solidifying one of those projections, therein helping him make his decision to stay in the draft or return to KU.

Underclassmen have until June 1 to pull their name from the draft pool in order to retain their college eligibility for the 2022-23 season.