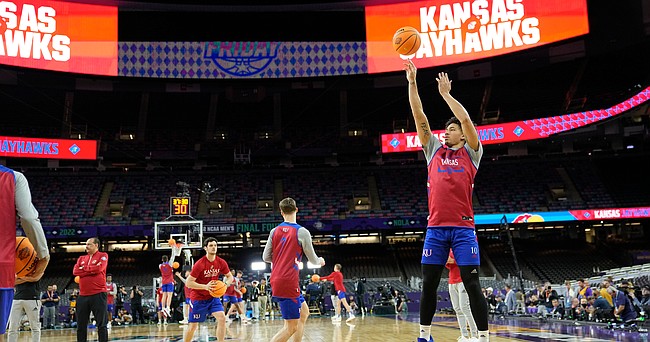 Kansas forward Jalen Wilson picked up where he left off during the Jayhawks’ run to the national championship, filling up the stat sheet in his first scrimmage at the NBA’s G League Elite Camp on Monday in Chicago.

Wilson’s strong showing from 3-point range was by far the most important part of Monday’s showing. He showed off his range and also looked smooth and on balance with each of his attempts.

The 6-foot-8 draft hopeful, who is still deciding whether to turn pro or return for Kansas for his junior season, also appeared lighter, leaner and more fluid with his movements during the scrimmage, which his team won 97-81.

Wilson, who went through drills and measurements while meeting with NBA and G League representatives, will play again Tuesday afternoon.

In the second game Monday, Wilson teammate David McCormack was on the losing end of a 90-87 scrimmage and he finished with nine points and three rebounds in just over 18 minutes on the court.

McCormack teamed with North Carolina big man Brady Manek in the loss and Manek said after the game that he enjoyed seeing McCormack again. It was the first time the two had met up since McCormack helped lead the Jayhawks past Manek and the North Carolina Tar Heels for the national title.

“David’s a really good dude,” Manek told sideline reporter Gianna Hearn after the live stream broadcast of the event. “Both of us were on the biggest stage you could be on in college and it was a lot of fun. It’s really cool to get to know him out here and get to know the kind of person he is.”

One other name of note was on the winning side in Game 2. Former Texas Tech wing Kevin McCullar Jr. scored four points and grabbed seven rebounds with one assist and two steals in Team 3’s victory over Manek and McCormack.

The former Red Raider who also is in the transfer portal has said that, while his primary goal is to reach the NBA, he would choose between Kansas and Gonzaga if he elects to return to school for another season.

Last month, Hunter narrowed his transfer options to a final six, with KU, Tennessee, Louisville, Gonzaga, Texas and Purdue all still alive for his services.

Brian Hanni’s 14th annual Rock Chalk Roundball Classic is a little more than three weeks away and tickets are now on sale.

This year’s event, which will run June 9-11, will feature the annual game on June 9, a VIP dinner on June 10 and the Roundbowl Classic bowling event on from noon to 2 p.m. on June 11.

As usual, this year’s event will feature five area children battling pediatric cancer. To date, the event has raised more than $770,000, with 103 former Jayhawks contributing in one way or another throughout the years.

For more information, or to donate, check out rockchalkroundballclassic.com.

Good news/ bad news ...........Good news is Im glad Jalen had a good showing at the combine. Bad news is if he continues to impress he probably wont be back .....I dont believe Jalen ever got the credit he deserved , yes his shooting left much to be desired but he still defended and rebounded ........nothing against Braun but i felt he and Jalen were pretty even on the court, I also would like to see Dave excel in the combine as well ...........to lose possibly 4 players to the NBA would great ( Ochai ,Braun,Wilson ,Mccormack ) but not likely

Jalen has im4proved a great deal, and last year was only the beginning. Besides meaning that he will go pro if he gets an indication that he will be drafted in at least 2nd round, this also means that if he returns his game will be improved. I also believe that KU won the championship because of the totality of the team. You could not beat KU in the tournament by just taking away 1 or 2 guys, because we had 4 guys who could score. All 4 were extremely valuable and essential.

I hope Jalen comes back, but if his game is really ready and he is secure in his draft position, then we will simply begin the transition. We still have talent and a coaching staff that can forge it into a strong team.

Hope he can back it up today.

Layne - There were 5 in double figures in the tourney; 4 starters and Remy. Ochai would always draw the best opposing defender, but JWil and CB would step up if he got too much D-attention. It just went over the top, pick your poison, with Remy and David coming around in the tournies.

Man, I wish Remy could have been healthy all year to step up another level the year prior when he won the Pac-12 POY. He was a on the watch list for best guard in the NCAA and projected Big 12 POY as well. He could have clearly accomplished those expectations if not for the chronic injury. No fluke that he won the POY for the NCAA tourney for games 1-4 or 2/3rds of our 6 tourney games. He was also the best player in the Big 12 tourney and won much of the last player ratings for KUsports.com once healthy at the end.

He has such a great attitude.

Does anyone know what Remy is planning on doing next year?