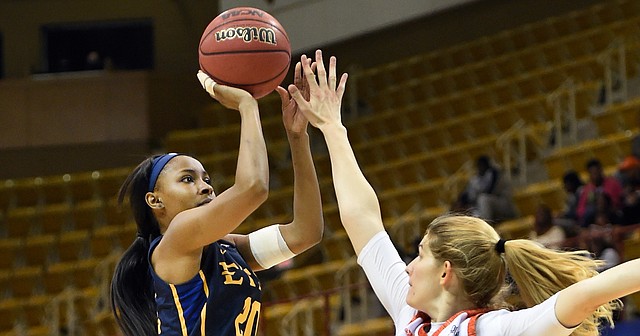 Haynes-Overton, who is from Nashville, will return home as a sixth-year senior after playing in just five games for the Jayhawks. She chose to transfer in January, with one minute in a 71-57 win over Texas Tech serving as her final appearance.

She transferred to Kansas in January 2020 from East Tennessee State, where she was a prolific scorer and a two-time SoCon Defensive Player of the Year. She scored 41 points against then-No. 23 Tennessee in November 2019 and had scored 1,046 points for the Buccaneers at the time of her departure.

After sitting out the rest of the 2019-20 season and then all of the 2020-21 season following her transfer, Haynes-Overton made her first appearance for Kansas in the 81-56 win over Omaha on Nov. 17. She scored 10 points and had five rebounds and two assists in 14 minutes this season.

Haynes-Overton joined guard Aniya Thomas as players who have recently transferred from Kansas. Thomas, the Jayhawks' longest-tenured player, decided last month to transfer to Missouri State for her final season of eligibility.

The Jayhawks also lost guard Julie Brosseau, who was a sixth-year senior last season, and it appears unlikely forward Matea Nikolic, who was a freshman and is from North Macedonia, will return.

Tulsa's Wyvette Mayberry decided to transfer to Kansas last month, and a pair of high school graduates will enroll for next season in guard Bella Swedlund and forward Zsofia Telegdy.