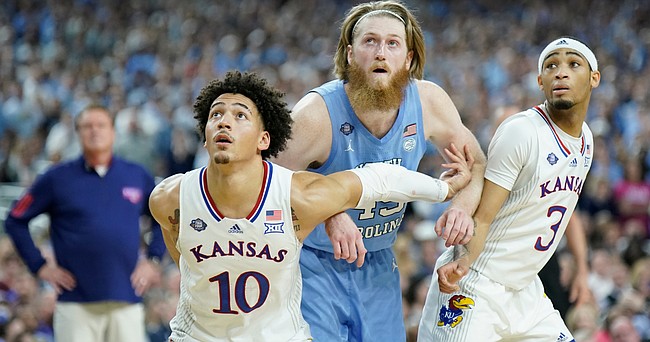 Kansas basketball standouts David McCormack and Jalen Wilson highlighted the list of 44 draft hopefuls who have been invited to the G League Elite Camp next week in Chicago.

The G League camp runs May 16 and 17 in conjunction with the NBA’s pre-draft combine, which is also in Chicago and slated for May 16-22.

The Journal-World reported last week that KU’s Ochai Agbaji and Christian Braun both received invitations to the pre-draft combine.

Of the four KU starters, Wilson was the only one who never officially declared for the draft. He did, however, share social media posts by Seven1 Sports and Entertainment group that revealed that he had signed with them to represent him through the pre-draft process.

This marks the second year in a row that Wilson has been invited to the G League Elite Camp, which, this year, includes 43 other players who were not invited to the combine.

“We are thrilled to host this talented group of draft prospects at our NBA G League Elite Camp,” G League Head of Basketball Operations Malik Rose said in a news release. “This is an incredible opportunity for these 44 young men to showcase their basketball abilities in front of both NBA and NBA G League front office personnel.”

Neither Wilson nor McCormack has appeared on any recent mock drafts and both have the option to return to school for the 2022-23 season.

All draft prospects with college eligibility remaining have until June 1 to pull their names from the draft pool in order to preserve their path toward a return to school.

Other than Wilson and McCormack, McCullar’s name might be the most interesting addition for Kansas fans, given the fact that the former Red Raider has said he will choose between KU and Gonzaga if he withdraws from the draft and plays the 2022-23 college basketball season.

Former KU point guard Remy Martin was not on the list. An inquiry about whether he received a combine invitation went unanswered.

THAT is a proper block out, and why J-Wil gets a lot of rebounds.

Anybody can do it but they rarely do

What is the deadline for entering the portal? Clemence, Adams, Wilson, Ejiofor - all vying for minutes at the 4 spot unless Wilson goes G league. Pettiford, Cuffe, Yesufu, Harris, maybe a portal acquisition, all small guards - someone will likely leave. Matt - any hints?

Nick - I believe May 1 was the deadline to declare and be eligible for next season, so at this time we appear to be fairly set. That is unless more or less than 2 players of the 4 remain in the draft. If CB stayed in, it could possibly open the door for David to return, though that seems unlikely.

Other than the guys testing their NBA draft stock and their potential to leave, as of today, there do not appear to be any plans for anyone else to leave the program.

Always a bit of a fluid situation in the offseason, though, so never be surprised by anything. We'll stay on it!