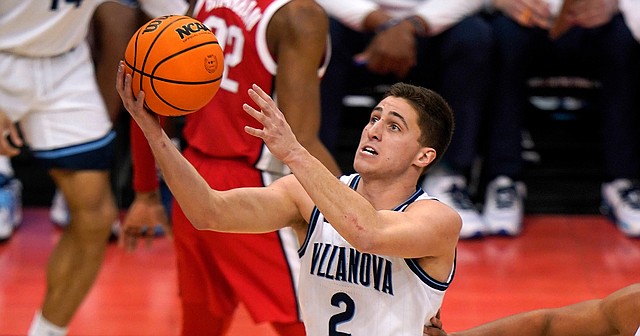 Villanova's Collin Gillespie (2) plays during the first half of a college basketball game against Ohio State in the second round of the NCAA tournament in Pittsburgh, Sunday, March 20, 2022.

After four years, the Kansas men's basketball team is back in the Final Four — and it will face the same opponent, Villanova, it faced the last time.

It goes without saying that it's hoping for a result on Saturday in New Orleans that's different from the 95-79 loss in 2018.

"It's like it's written," Kansas sixth-year senior center Mitch Lightfoot said Tuesday. "We played them in the Final Four and lost in 2018, and it's only fair to go out there and play again and give them our best shot."

Here's what you should know about Villanova heading into the Final Four matchup in New Orleans on Saturday night.

Strengths: The Wildcats are an exceptional 3-point shooting team in terms of volume and accuracy. They are shooting 35.7% from beyond the perimeter, and Gillespie is shooting 40.9% on 264 attempts — an average of 7.1 per game. That also translates to the free throw line as Villanova is on pace to set a Division I record. It is shooting 83% on free throws, which could top Harvard's record of 82.2% set in 1983-84. Gillespie is 105-for-116 (90.5%) from the free throw line this season.

Weaknesses: Despite its efficiency from beyond the perimeter and at the foul line, Villanova isn't a particularly strong 2-point shooting team. It has made 49.9% of its 2-point attempts, good for 171st in Division I, and if it's not squaring up from 3-point range, it's driving to the rim. According to Hoop-Math.com, only 18.7% of the Wildcats' scoring attempts come off 2-point jump shots. And, owing to the size of its players, it's an average rebounding team (35 per game) and does not block shots (2.3 per game).

1. Missing Moore: The Wildcats will be without Justin Moore, a junior guard who tore his right Achilles tendon late in the 50-44 victory over Houston on Saturday. He was their second-leading scorer with 14.8 points per game and, at 34.4, played the most minutes of any Villanova player. How both teams account for his absence will be paramount to their success. "That's certainly a blow to him and to the program and so sad for him, but they've got capable guys," Kansas coach Bill Self said Tuesday. "They'll bring Daniels in, or whoever, and they're usually going to have five guards that they're going to defend all the time on the perimeter." The Jayhawks encountered a similar situation in the second round, when Creighton lost Ryan Kalkbrenner, arguably its best player, to a knee injury late in the previous game. Self said then that the limited turnaround between games and Kalkbrenner's significant minutes made it hard for Kansas to accurately scout Creighton, but the week between games allows for a more thorough review.

2. Relentless from 3: Villanova has attempted 957 shots from 3-point range this season — an average of 25.9 per game and 46.1% of its total field goal attempts. Only 19 other Division I schools had a greater percentage of its shots from beyond the perimeter, according to Hoop-Math.com, and Alabama was the only other one from a major conference. "That's a ridiculously high number," Self said. That means the Wildcats, who are shooting 35.7% from 3-point range, get 38.6% of their scoring from beyond the perimeter. That's not a problem for Kansas, necessarily, as it is holding opponents to 29.6% on 3-pointers, which ranks 18th in Division I.

3. Guarding Gillespie: Gillespie, Villanova's fifth-year senior point guard, recovered after tearing the MCL in his left knee late last season to be ready for the start of this one. The heart and soul of the Wildcats, Gillespie was named the most outstanding player of the Big East tournament and scored 20 or more points nine times this season, including 33 at Providence, the regular-season Big East champion, on Feb. 15. His 55.9 effective field goal percentage, which accounts for the variance between 2-pointers and 3-pointers, is among the best in Division I among point guards — and he's also a strong defensive player, according to Lightfoot. "I think it all starts with Gillespie," he said. "He's such a great defensive mind. He knows where to be and when to be there."