Kansas’ Bill Self: Ochai Agbaji will ‘be full of confidence’ after performance vs. Miami 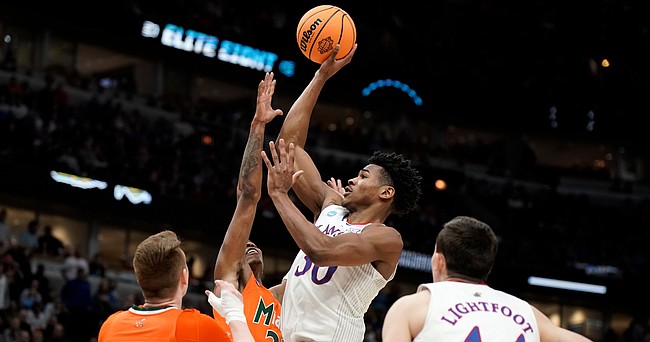 Chicago — Kansas coach Bill Self said Friday that he was confident Ochai Agbaji would soon get back to his scoring ways and that "the lid will come off eventually."

Agbaji, a finalist for the major national player of the year awards, had his best performance of the postseason in Kansas' 76-50 victory over Miami on Sunday in the Elite Eight as he finished with a team-high 18 points, five rebounds and four assists, and tied a career high with four steals. 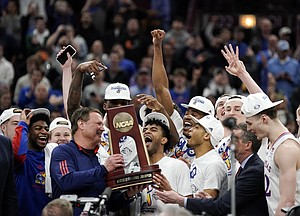 Kansas outscored Miami 47-15 after halftime, and Agbaji, who had 12 points following the break, had his fingerprints all over the 19-5 run that began the second half.

He stole the ball on a bad pass by Jordan Miller on the Hurricanes' first possession, sank a pair of layups — including one on a breakaway that could have easily been an emphatic dunk — and threw a baseball-style, three quarters-court pass that set up a layup by David McCormack on which he drew a foul.

"Ochai has carried us all year long," coach Bill Self said. "For him to not get 20 or 22 in a game does not mean he's in a slump or anything like that. He has labored offensively, I think, in large part because of how people have defended him. And maybe we haven't done a good job of getting him the ball. But I know now, after the way we played the second half, he'll be full of confidence moving forward."

Agbaji also made a 3-pointer with 10:16 remaining after he collected a ball in the left corner that Jalen Wilson prevented from going out of bounds. That put the Jayhawks up, 54-42.

"David's and-one and my 3, those are plays we needed in the second half to get us momentum moving forward," Agbaji said. "So, once we made those plays, it was just like, no looking back."

Agbaji scored a season-low five points in Kansas' 66-61 win over Providence in the Sweet 16 on Friday. Although he ended the regular season averaging 19.8 points per game, he entered Sunday averaging 13 points per game in the 10 games the Jayhawks have played in March and 12.4 in the postseason.

"I see the game maybe a little differently than a lot of folks," Self said. "I think Ochai can play well without making shots. But I think to the public, that's what we depend on him to do.

"So, I mean, I think if you have to prove your worth, whether you play good or not, if the ball goes in the hole or not, that doesn't really mean you're the player you can be. Ochai has carried us all year long."

I was never worried about Ochai. He was contributing in so many other ways, actually stepping up his defense during this brief offense slow down. He's the best!

That, and Remy Martin was making up the difference with his scoring.

I was expecting Ochai would be as valuable as Duke's Banchero in the tournament, in both ends of the court. Today, Ochai, kind of showed up, but he needs to have that killer instinct when ball is in his hands. He needs to finish the buckets. He has to continue shooting those 3s and jumpers with confidence, not only performing great defensively. The more scoring options we have, the harder we are to beat.

The beauty of the team is that there are so many options. It’s a really good team with the three wings - you can’t stop them all. Add to that a 1 a&b plus a 5 a&b and a surprise freshman defensive stopper off the bench.

The best thing about all of this is that it really started on the defensive end. That should take them through the week of prep and the semi finals with that much more intensity.

That was a great game our men played today. Now on to New Orleans next weekend. My one observation.....we must concentrate on making our free throws. Fifty percent will not get the job done against Villanova. They don't miss free throws.

Kevin Harlan (a KU Graduate) is an excellent play by play announcer! He is "arguably" the best in a competitive business that includes Jim Nantz and Ian Eagle.

But, his color commentators , Reggie Miller and Dan Bonner were somewhat critical of Ochai Agbaji, saying he needs to "be more selfish" and "create his own shots off the bounce". I guess there is some merit to their "constructive criticism", and Ochai certainly responded in the second half!

Ochai Agbaji is a player that prefers to "blend into the action". The key to his performance is simply making the open shots! He is also sound on the defensive end of the floor.