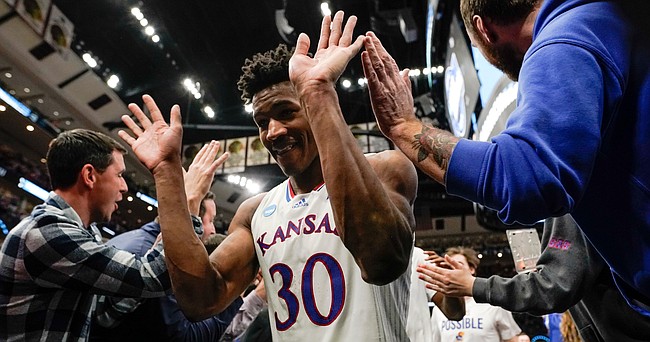 Kansas guard Ochai Agbaji slaps hands with fans as the Jayhawks leave the court following their 66-61 victory over Providence on Friday, March 25, 2022 at United Center in Chicago.

Chicago — Ochai Agbaji has been thinking recently about the run the Kansas men's basketball team should have made two years ago, when the Big 12 and NCAA tournaments were cancelled at the start of the COVID-19 pandemic and he and his teammates were stripped of a chance at winning a national championship.

The Jayhawks were the unanimous top-ranked team in the country then, 28-3 with the program's sixth national championship in its sights.

Now, they're 31-6, the top-ranked team and the only No. 1 seed remaining in the NCAA Tournament, and a victory over No. 10 seed Miami on Sunday afternoon at United Center would send them back to the Final Four for the first time since 2018.

Agbaji was a sophomore in 2020, an every-game starter with a promising future who was third on the team in scoring. This season, he's the Jayhawks' star, a finalist for the major national player of the year awards who has lifted a balanced team to the cusp of the college game's grandest stage.

Through those differences, one parallel has emerged to Agbaji. On both occasions, Kansas knew it had a tangible chance of winning the NCAA title.

Kansas was much more defensively oriented behind Garrett and Azubuike — "a different-level defensive team," coach Bill Self said — but he finds one more significant distinction.

Wilson, who said the Jayhawks were "the best team in the nation," has often expressed regret over being unable to play that season and appreciation for playing a significant role in this run.

He said the pain from two years ago has made him even hungrier to win a national championship.

"Seeing how hard we worked and seeing how hard we played to be the champion, to be No. 1, it was kind of tough for it to all be thrown away, in a sense, especially so fast," Wilson said. "I think it all (was canceled) in one day, so it was just crazy how fast everything happened."

What has made this year's run even sweeter, Wilson said, is the lack of success the Jayhawks had last season. They were 20-8, were unranked in early February and recovered to earn a No. 3 seed when, limited by injuries and illness, they were knocked out of the NCAA Tournament with a second-round defeat against USC.

He knew that experience alone wouldn't make the Jayhawks better — they lost just one starter in Garrett — but figured growth would come. By the time Kansas blew out then-No. 8 Baylor 83-59 on Feb. 5, his expectations grew — and, as Agbaji said, everyone's did.

Remy Martin, the fifth-year senior who transferred to Kansas from Arizona State, gave the Jayhawks the infusion of confidence they needed. As they have coalesced around Martin and consolidated their goals, the hope of a national championship run has grown.

"It's just really motivating, knowing how far we've come, all the work we've put in and we're at this point just as a team," Agbaji said. "We're just so close to obviously getting to a Final Four, a dream for everyone one our team."

And for the players before him.

Remy Martin on not starting, his personality & why Kansas by KUsports.com

Ochai Agbaji on Jalen Wilson & fighting through off shooting nights by KUsports.com

Jalen Wilson on his development & playing with Remy Martin by KUsports.com

There was a reason KU was #1 in the 2019-2020 polls - a dominate shot blocker and an unbelievable finisher at the rim - Udoka Azubuike. Devon Dotson was also a huge factor given his speed and ability to finish at the rim while Marcus Garrett was a true shut down defender. The 2022 version is completely different and relies on their 3 wings, Braun, Wilson, and Agbaji to carry the scoring load. In the games against Creighton and Providence, both Braun and Agbaji have underperformed; 4-14 combined against Providence and 10-23 against Creighton. Here is hoping both step up their games and that Remy Martin can score when needed and Jalen Wilson can continue to crash the boards and get extra possessions. Go, fight, win. Rock Chalk.