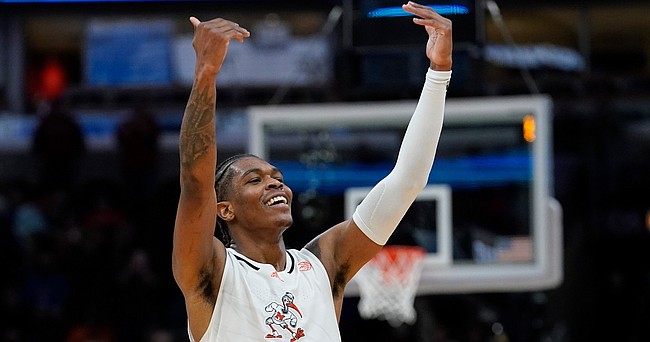 Miami's Kameron McGusty reacts after a college basketball game in the Sweet 16 round of the NCAA tournament Friday, March 25, 2022, in Chicago. Miami won 70-56.

Chicago — The top-seeded Kansas men's basketball team's run in the NCAA Tournament continues Sunday when it faces No. 10 seed Miami in the Elite Eight at United Center in Chicago.

Miami advanced to the Elite Eight for the first time in school history by defeating No. 11 seed Iowa State 70-56. Kameron McGusty scored 27 points, two shy of a career high, and Jordan Miller had 16 points and seven rebounds for the Hurricanes.

Here's what you should know about Miami heading into the Elite Eight matchup.

Strengths: The Hurricanes force 14 turnovers per game and are producing 8.9 steals per game, good for 15th and the most of the eight teams remaining in the NCAA Tournament. Three players have at least 60 steals this season. Furthermore, their 13.8 turnover percentage, per BartTorvik.com, ranks sixth in Division I, and they're not careless with the ball, either, as they rank fifth with a turnover margin of plus-4.6. Miami enters ranked 18th in adjusted offensive efficiency at 114.8, according to KenPom.com, and it is shooting 55 percent on 2-pointers.

Weaknesses: With a smaller starting lineup, it's no surprise that Miami is one of the worst rebounding teams in the nation. Its 30.7 rebounds per game rank last among any team in the six major conferences and 340th out of the 350 full Division I schools. Miami hasn't outrebounded an opponent since Feb. 15, and it has done so just once in its last 15 games. It's also, predictably, a poor defensive team against shots at the rim. According to Hoop-Math.com, the Hurricanes are allowing teams to score on 63.8 percent of all layups, dunks or tip-ins.

1. More for Moore: Sixth-year senior point guard Charlie Moore transferred from Kansas to DePaul after the 2018-19 season and played two seasons for the Blue Demons before using his final year of eligibility a bit farther from his Chicago home. The decision has paid off for Moore, whom coach Jim Larrañaga has repeatedly said is the best point guard in the ACC. Moore has been a consistent scorer and facilitator for the Hurricanes this season, and he surely would like nothing more than leading Miami to the Final Four with a win against one of his former schools in his home city.

2. Do it on defense: The Hurricanes are proud of their "scramble" defense, not so much in terms of shooting or scoring but how they disrupt opponents' offenses. They have held opponents to 70.2 points per game and 45.7% shooting — rather average numbers — but they have forced 14 turnovers per game. Only three times this season has Miami had more turnovers than its opponent, and it is scoring 16.8 points per game off turnovers. They do not want to allow shots at any cost. "It all starts with our defense, honestly," McGusty said Thursday. "Our defense turns our offense up. It's what gets our offense going. We're playing in transition. We're getting steals. We're getting stops, clapping. And that's what gets us going. That's what gets our energy going and our energy flowing. So, it's definitely going to start on the defensive end."

3. Not backing down: Larrañaga has not shied away from the "why not us?" mentality during the postseason, consistently reminding observers that Miami was picked to finish 12th in the ACC in the preseason poll. Now, the Hurricanes, who went 10-17 last season, are the second team to reach the Elite Eight one year after winning 10 or fewer games since the tournament expanded to 64 teams in 1985 (Ohio State, in 1998-99, is the other). Miami eked by No. 7 seed USC in the first round, but blew the doors off No. 2 seed Auburn in the second round and used an emphatic second half to beat Iowa State on Friday. And remember, if anyone can play that card, it's Larrañaga, who led George Mason to the Final Four in 2006. "Sadly to say, they're tired of hearing about George Mason and have told me, 'Hey, let's do what they did so you can talk about us in the future rather than them,'" he said Thursday. "The George Mason is a good story to share with them about being underrated, underappreciated and even basically told you're not even going to make the dance."

Forget about their defense, if we can't even score open looks. Plus, it's their offense that really makes them a real basketball team to beat. They can score. Even against ISU, one of the best defensive teams in the nations. Miami has a lot of offensive weapons. A lot.

Their disruptive defense can't be worse than our disruptive offense. We need to make shots, especially those in rhythm and in the scheme of things. We do that better when we push it down the floor before the defense gets set up. Of course, that requires rebounding the ball and thanks to Jalen and CB, we got many. Mac had 2 boards and one was an uncontested missed free throw.

BTW, the CBS announcers, even including Reggie, were so woefully uninformed on KU personnel. I was shocked as to how much. Even the TBS talking heads get it closer to what`s what. And when it comes down to predictions and all, they do not have it any more together than any of us. On that note, who has St. Peters in the 8 or Iowa State advancing to where they did or Arkansas beating Gone Zaga or ........?

Another btw. If their defense is credited for forcing 14 turnovers per game, I wonder how many of those were actually forced as opposed to so many that are not, but shown as such? e.g. Jalen throws the ball into the stands with no-one on him and that's a TO.

These games are all tough at this stage. It almost comes down to how we play our own game more so that the strengths and weaknesses of any opponent. I think our shots will fall soon and when they do, that game will be a certain win.

Attack in the low block until they concede.

I think we are going to suck all the way to the national championship game. Yes we have deficiencies but y’all are forgetting that we keep winning games.

"...goint to suck all the way to the national chamionship game." Post of the tournament, as far as I am concerned!

Off subject but I absolutely have to share this short (9-minute) video with our KU football fans. This is four "experts" on the Longhorn Network predicting the 2021 Kansas - Texas football game. I have watched this a couple of times over the past few months and get lots of laughs at these guys every time.

That was entertaining, knowing the outcome as I do. I think it would be fun to go see their show from the week following.

If you find that show from the week following, please let me know. I think it's something to do with orangeblood if you are searching.

Thanks for the link, Dale.

I actually thought their predictions were pretty realistic, given the histories of the two teams. In fact, they all picked KU to easily cover the spread, and they were pretty down on Texas.

I also couldn't really laugh because I thought of how many times over the years opposing teams have had similar prediction shows and those predictions have been accurate.

Still great to reminisce about one of the greatest games in KU football history, though.

I thought so, too. What I enjoyed most, knowing that we beat them, was their attitudes about it being Kansas and therefore a given that they win. Their only question was by how much. Again, it was their arrogancy and attitudes I found entertaining in hindsight.

Miami hasn’t seen a team who plays like Kansas. This is the one hawks find their rhythm and finally loosen up.