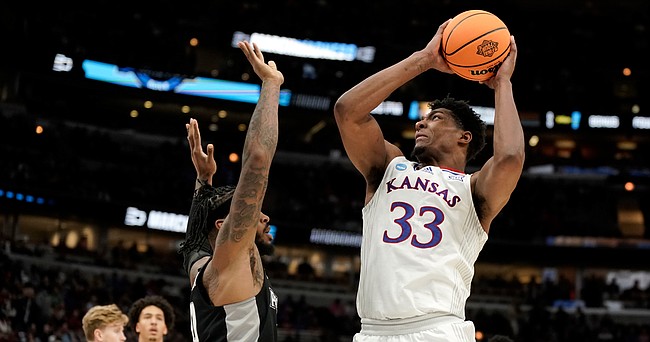 Kansas forward David McCormack (33) pulls up for a shot over Providence center Nate Watson (0) during the first half on Friday, March 25, 2022 at United Center in Chicago.

Chicago — It’s no secret that Kansas coach Bill Self likes to play through his big men.

Always has. Always will.

But it might have come as a bit of a surprise that Self elected to do that so late in Friday’s 66-61 win over fourth-seeded Providence at United Center.

Throughout Friday’s victory, Kansas big man David McCormack was mostly ineffective. He struggled to score and rebound early and coughed up three turnovers while shooting 2-of-5 from the floor by the final buzzer.

He also looked a step slow and lacked explosiveness around the rim on both ends.

“David struggled tonight,” Self said after the victory. “I didn't think he rebounded the ball or defended his position very well early. And he had a couple of touches in there we came away with nothing that could have been points.”

Still, with Kansas leading by just four points late — in a game the Jayhawks once led by 13, no less — Self called for his guards to throw the ball into McCormack to at least get things started on a few key offensive possessions.

McCormack didn’t exactly light the world on fire during that stretch, but he did do enough with his physical presence to help Kansas stave off an unexpected surge by back-up Providence big man Ed Croswell midway through the second half.

With Croswell bullying his way to seven consecutive Providence points during a 2-minute stretch to pull the Friars within five (37-32) with 11:36 to play, it became evident that the Jayhawks had no answer for the 6-foot-8, 245-pound senior when he got the ball at point blank range in the paint.

From there, it was one of those if-you-can’t-beat-’em-join-’em situations for the Jayhawks (31-6). Eventually, Croswell slowed down. But throwing the ball into McCormack and trying to re-establish a presence in the paint helped Kansas survive the Friars’ threat of taking control of the game.

“We wouldn't have won the game without him,” Self said of McCormack, who got to the free throw line a couple of times late and hit four of six charity shots overall.

Bothered by a foot injury throughout the season, McCormack continues to look like a guy who is playing at less than 100%. He and Self have been asked about his foot on multiple occasions during the past several weeks and both continue to say it’s fine. Sore, but fine.

And there’s not a soul alive who thinks that McCormack is going to start worrying about it now, with his team one win away from reaching the Final Four. According to their coach, the Jayhawks might not be in that position if not, in some small part, for the play of their big man on Friday night.

“At the end of the day he delivered for us when it counted,” Self said. “So it's not how you start, it's how you finish.”

Next up for McCormack and the top-seeded Jayhawks is a 1:20 p.m. tipoff on Sunday against No. 10 seed Miami (Fla.) at United Center. The winner punches its ticket to the Final Four in New Orleans.

Dave also got Watson in foul trouble which is significant.

He literally had more turn-overs than field goals. Add in twice as many fouls as rebounds and you have to wonder what the point of this polish of a turd article's purpose is this weekend.

Against physical teams, Mac's spot is on the bench as much as possible.

Against hyper mobile, 3-point shooting big man, he is a major liability. However, I think what Self believes is that he provides more than points for the team. He is enough of a player that he must be guarded, and he has the ability to get rebounds, alter shots, and make FTs when fouled.

at this point, he's going to play major minutes whether us fans like it or not or he gets in quick foul trouble. I wish we could have seen yesufu a little bit this last game. but looks like the rotation is down to basically 7-8 and will still be that way unless circumstances dictate otherwise.

Dave needs to teach Remy how to shoot free throws.

It's difficult for me to understand how after 4 years, David still catches the ball near the basket and ends up taking a 10 foot fadeaway shot that has no prayer and it is so far out of our rotation, there is no rebound potential.
One of the contributing factors to his offensive rebound stats is that many are from his own misses at point blank range.
Nonetheless, he is a critical factor for us and he did make some vital contributions in the 2nd half at a time they were super important. The hope is that he does not do too much damage before he gets it together.

If he even gets a shot. He fumbles it out of bounds about half the time.

Mack just seems to,have to dribble or,bring the ball down before he shoots and thus has so make of his possions knocked awaymor,turned over. Ismitmweak hands? I dont know but that needs to be fixed

As many times we win by net positive contributions DMac, we win (or lose) in spite of David, not because of David. I know this is pointing out the obvious "emperor has no clothes thing". No one wants to be that honest. I'm watching the games when he gets the ball and I say, "Ut oh, he's going to screw this up, Unfortunately, more often than not, I am right.

Never have figured out why he insists on dribbling in traffic under the basket almost every time or how he misses so many shots from two feet away - and the shots aren't even close typically. Or, how many times he loses the ball or it gets taken away or knocked out. Braun seems to go strong the basket more than our big man for some reason.

I would rather one of the three options as soon as we see he is on the path to a bad game: 1) play small, 2) utilize our freshman big, or 3) play Lightfood if healthy.

Hoping David proves me wrong over the next 3 games.

Robert, good point about DMac teaching how to shoot freethrows. I give him that.

Lee, you're not the only one has that "uh oh, Dave's got the inbound" - if he didn't lose the ball. Funny that kusports.com made me a calmer fan, more understanding fan (still b!$%ing though). After realizing that he's been playing with pain due to foot surgery, I accepted the fact that this Dave now is different than last year's Dave. But, what I find it hard to digest is, KU - a blue blood program, a place where basketball was born - can't develop its bigs those post moves. And yet, coach BS always forces inbound plays regardless. Another annoying thing about Dave (this has nothing to do with his foot) in his 3-4 years with KU, he still doesn't understand how to set screens. Up till now, he still gets called for moving/illegal screen. He still doesn't understand that he's not supposed to set screen when our guards moving from side to side. That is so painful to watch. Not to take away credits when he's got 10 rebounds and double double playing with pain. I want to see improvement on Dave.

Don't get me wrong, I love the fact that this team has gone this far - but I want to watch a beautiful basketball by a real good KU basketball team.