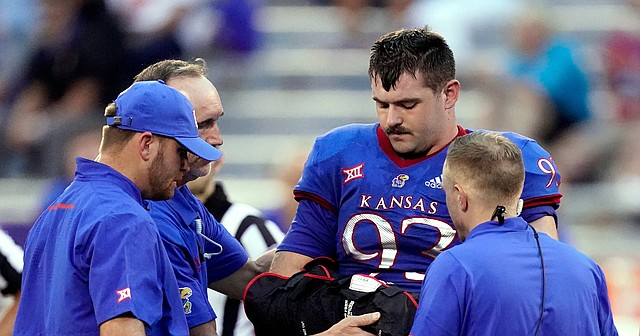 Kansas defensive lineman Sam Burt (93) is helped off the field after an injury during the first half of an NCAA college football game against South Dakota Friday, Sept. 3, 2021, in Lawrence, Kan. (AP Photo/Charlie Riedel)

He was even introduced prior to Thursday's press conference as a "super-super senior."

"You don't have to say that," Burt said, smiling and laughing.

Yet Burt knows that with age comes experience, and that's something the Kansas football team's defensive tackle has in abundance.

Burt took advantage of the extra year of eligibility granted by the NCAA at the start of the COVID-19 pandemic to play a fifth season in the fall.

When he broke his right arm early in the season-opening victory over South Dakota, Burt figured that was the end of his career.

Not long thereafter, he found out he would be eligible for a redshirt, considering he never took one during his first four seasons.

"I got surgery right away and wasn't really sure what I wanted to do off the bat, whether I wanted to come back and just finish it out as best I could, and honestly, that's what I thought was going to happen, because I didn't even know I had an opportunity for another redshirt until one of the coaches came up to me about three weeks later and offered me it," Burt said.

"I really thought long and hard about it, and I feel like this is an opportunity for me. ... I've invested a lot of time in this team and now that I finally see some change happening, some great change and some pieces being put together, I can't pass up this opportunity to come back for another year."

By accepting the offer of a redshirt, Burt was only allowed to play in four games last season. He returned for the game against Kansas State on Nov. 6, just over two months after he was injured, and then played in the overtime victory at Texas a week later.

That left him with just one more game, so he sat against TCU and then suited up one last time against West Virginia in the season finale.

Several players have pointed to the final four games, especially the surprising win over the Longhorns, as proof that the Jayhawks are heading in the right direction under coach Lance Leipold.

"We came up short in a little bit of things, but I think that is a testament to kind of starting late, and so that was a big factor with me wanting to come back because I felt the pieces starting to click together and I knew I had a chance and God provided me the chance to come back — so I took it," he said. "But yeah, even with this winter training and the spring ball, I think this team, this group, has a very good opportunity this fall for a lot of change."

Even with his experience — a former walk-on who played in 43 of 45 games during his first four seasons — Burt's path to playing time isn't clear. His absence allowed for the emergence of Caleb Taylor, who will be a redshirt sophomore in the fall, and Eddie Wilson, Kenean Caldwell and Caleb Sampson will also compete for snaps.

That's not a concern to defensive tackles coach Jim Panagos, who was hired last month. He and Taiwo Onatulo, who spent last season as a defensive analyst, will coach the defensive linemen, and Panagos said he had a strong first impression of Burt.

"Sam Burt works his (butt) off, more than anyone I've seen in my 31 years, and as long as you're willing to work, the results take care of itself."

Burt, from Abilene, is finishing a graduate certificate in environmental assessment this spring. He wants to begin a career in wildlife conservation or forestry, because, as he said, "I love nature and I want to preserve that the best I can for my children and generations to come."

First, though, is some unfinished business on the football field.

"I think I've seen things that I haven't seen during my time here in terms of discipline, in terms of ownership, physicality and also just coming together as a team and brotherhood," Burt said. "I think right now is the best I've ever seen this team in terms of those things and it's very encouraging to see, because I've spent a lot of time just in this past couple of weeks kind of reflecting on that and making sure that is true."