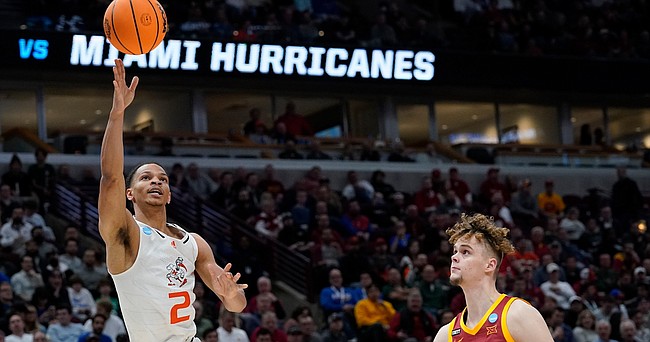 Miami’s Isaiah Wong shoots in front of Iowa State's Aljaz Kunc during the second half of a college basketball game in the Sweet 16 round of the NCAA tournament Friday, March 25, 2022, in Chicago.

Chicago — Kameron McGusty scored 27 points and Miami advanced to the Elite Eight for the first time, using its swarming defense to beat Iowa State 70-56 in the NCAA Tournament on Friday night.

Jordan Miller added 16 points on 6-of-6 shooting as No. 10 seed Miami more than held its own in a matchup of two of the tournament's most suffocating defenses. The 11th-seeded Cyclones shot 32% in the second half and finished with 18 turnovers.

With Charlie Moore directing the attack in his hometown, the Hurricanes (26-10) got their first win in the school's fourth appearance in the Sweet 16. Next up is No. 1 seed Kansas — a 66-61 winner over Providence — on Sunday for a spot in the Final Four, where Hurricanes coach Jim Larrañaga took George Mason in 2006.

Iowa State (22-13) rode its hard-nosed defense into the Midwest regional semifinals after it had just two wins last season. It forced 14 turnovers after Miami turned it over seven times in the first two rounds, but the Hurricanes shot 46%. The Cyclones allowed 33.3% shooting over their first two tournament games.

Iowa State made a couple charges down the stretch, but McGusty made a 3 and converted a layup to help Miami answer each time. When Sam Waardenburg connected from deep and Miller made two foul shots to make it 60-46 with 2:47 to go, the celebration was on for the Hurricanes.

Moore was back in Chicago after starring for Morgan Park in high school and playing for DePaul during a college career that also included stops at California and Kansas. Iowa State’s George Conditt IV also got to play in his hometown in his senior season.

Moore went scoreless in the first half, but he set up Miller for a pair of layups while helping Miami to a 32-29 halftime lead.

Conditt had eight points at halftime, including a big jam over Waardenburg and a rebound dunk.

Sam Waardenburg making 3’s is a sign that maybe Mitch will need to play more on Sunday. It seems that we match up well otherwise. I would hope that DaJuan and Temy can make Charlie sufficiently uncomfortable to disrupt their O.

When we have gone to the Final Four under Bill Self, there were four common factors in each Elite Eight game we won:

1) The game was played on Sunday.

2) The game was televised on CBS, not one of the Turner channels.

3) The game was the last Elite Eight game that needed to be played.

This time around, only two of those factors are in play: A Sunday game, and a CBS game. Our Elite Eight will be the third one to be played, and the opponent hails from Florida, not North Carolina (although Miami, like UNC and Duke, is in the ACC).

REASONS WHY WE CAN WIN:

2) As noted, we have fared well against ACC schools the last two times we went to the Final Four.

4) We're battle tested, we don't fold when the going gets tough, as demonstrated in our wins over Creighton and Providence.

5) Ochai and Christian are due for big games after being mostly non-factors the last two or three games.

6) Miami is in the Elite Eight for the first time in school history, unfamiliar territory for the Hurricanes, and the moment might be too big for them.

1) The opponent is not from North Carolina, and it's not the last game of the Elite Eight.

2) Miami coach Jim Larranaga was the coach who got George Mason to the Final Four in 2006, so he knows a thing or two about pulling massive upsets to get to college basketball's biggest stage.

3) Bill Self has a spotty record in Elite Eight games. He is 3-5 in the Elite Eight at Kansas, 3-7 overall including his tenures at Tulsa and Illinois.

4) Miami has already pulled a huge upset in beating #2 seed Auburn, so they won't be intimidated by us.

5) Miami is a football school. And apparently we don't do well against football schools in the NCAA Tournament, as demonstrated by losses to Auburn in 2019 and Southern California in 2021.

6) Top seeds are not faring well in this tournament, and we're one bad game away from watching the Final Four from home with Baylor, Gonzaga, and Arizona.

I hope we win tomorrow, but if we lose, at least it won't be to the Cry-Clowns from Iowa State. Rock Chalk Jayhawk!

The really good news for us is that we have all players stepping up as situation merits it. In the past if Christian and Ochai had such mediocre games, and David, as well, there is no way we would win. Now it is apparent that Jalen and Remy can carry the load, if need be.

Miami will be a challenge, as by now, anybody in the tournament should be. This is for the Final Four baby, and the ticket is not free.

If Ochai and Christian come out of the funk, we will definitely win, but even if they don't if we play defense, and rebound, we can still win the game. We will also need to get them off the 3 line when we can.

Charlie will be a big part of game. He may try to do too much. Interestingly he fell out of favor at KU because of runs of turnovers, which he started with against Iowa St, but Miami just rode out his mistakes, and he turned it around. We might be able to turn him over a lot.