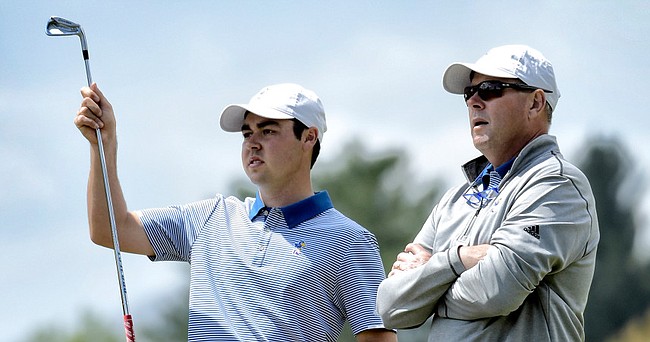 Kansas men's golf coach Jamie Bermel has signed a new five-year contract that will keep him at the university through the 2026-27 season.

Bermel, who is in his 10th season, has led the Jayhawks to five consecutive NCAA Regional appearances and has them in line for a sixth this season.

Ranked No. 15 in the Bushnell/Golfweek D1 Coaches Poll, No. 16 in the Golfstat poll and No. 19 in the Golfweek Sagarin Collegiate Rankings, Kansas has won four tournaments this season and hasn't placed lower than fifth in any of its seven stroke play events.

"We are experiencing exciting times with men's golf, but the job is not complete," Bermel said in a statement announcing the contract. "When I took this position 10 years ago, the goal was to compete at the highest level, graduate our student-athletes and provide them a first-class experience at KU. That will remain the focus moving forward as we continue building this program."

The terms of Bermel's contract were not immediately available.

The Jayhawks won the team title at the Gopher Invitational in Minneapolis, the Windon Memorial Classic in Chicago, the Quail Valley Collegiate in Vero Beach, Florida, and the Ka'anapali Collegiate Classic in Maui, Hawaii. They finished sixth at the Big 12 match play in Houston in October.

Sophomore Luke Kluver shot a 10-under-par 203 to win the Gopher Individual on Sept. 13, and Davis Cooper shot a 9-under 204 to finish first at the Windon Memorial two weeks later. Only three times this season have the Jayhawks not had a golfer finish in the top five of a stroke-play event.

"Along with associate head coach Chris Wilson, Jamie has transformed Kansas men's golf into one of the top programs in the country, featuring young men that that excel on the course, in the community and in the classroom," athletic director Travis Goff said in the statement. "Jamie's commitment to developing his student-athletes in every phase of life is a cornerstone of the program and we look forward to supporting their pursuit of championships in the years ahead."

Since the start of the postseason run in 2015-16, Kansas has won 13 tournament titles and claimed 49 top-five finishes. Prior to Bermel's hiring, they had not qualified for an NCAA Regional since 2007.

The Jayhawks will compete in the two-day Seahawk Intercollegiate in Wilmington, North Carolina, beginning Sunday.