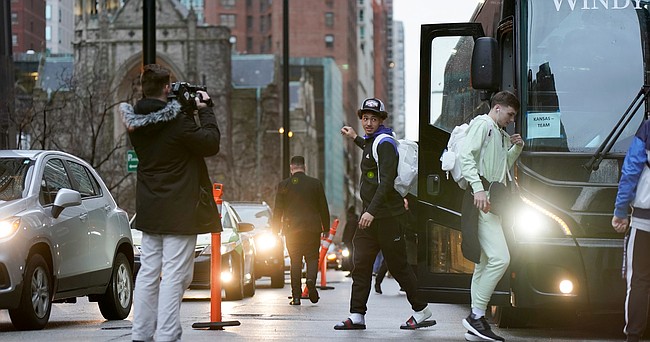 Chicago — The top-seeded Kansas men’s basketball team arrived at its team hotel in The Windy City via police escort on a rainy Wednesday evening, much to the delight of head coach Bill Self.

“I love Chicago,” Self said in a brief chat with reporters after getting off one of three team buses. “Chicago has been very good to me and our programs, respectively, at Illinois and, obviously, Kansas. We’ve got some really good players out of these areas. It’s nice to be back.”

So many of Self’s previous trips to Chicago were on recruiting assignments. And Kansas certainly landed its fair share of talent from Chi Town. Sherron Collins and Jamari Traylor were from the heart of the city. And several other Jayhawks — Julian Wright, Cliff Alexander, Mario Little, Devon Dotson, Isaiah Moss, Charlie Moore and others — grew up at least partially in and around the area, as well. 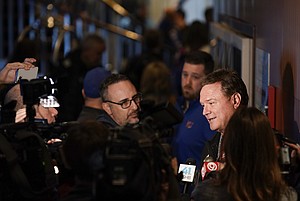 Kansas head coach Bill Self talks with media members shortly after arriving at the Westin hotel in downtown Chicago on Wednesday, March 23, 2022.

While none of those names will have any bearing on how top-seeded Kansas (30-6) performs here this week — the Jayhawks are 4-1 inside the United Center under Self — Self KU’s return brought a good vibe to the program.

While the wait between last Saturday’s win over Creighton in Fort Worth, Texas, and Friday’s 6:29 p.m. tipoff with No. 4 seed Providence has been agonizing for many Kansas fans, Self said it has been good for the Jayhawks themselves.

A big reason for that was the extra rest and rehab time it provided senior forward Mitch Lightfoot, who is still nursing a sprained knee.

Self said he would estimate that Lightfoot played at 75-80% last weekend. He thinks he’ll be better than that on Friday.

The break comes from playing Thursday/Saturday in Rounds 1 and 2 and not again until Friday in the Sweet 16.

Speaking of the Sweet 16, Self said preparations for Providence are just now starting to ramp into high gear. The Jayhawks were off on Sunday, practiced hard Monday and Wednesday and held a walk-through on Tuesday.

“We’ve only had two practices this week so far where we really got after it,” he said. “Providence does a ton of stuff, on both ends, but primarily offensively. So, we’ve got a lot of work to still do to be comfortable before the game on Friday.”

good to see och in that video-he's physically there. now if he can be mentally, too, w remy, prov doesnt stand a chance. play loose. if we see the tcu/crei OA , were in trouble. glad we got remy & what a good kid he is, too. think he owes us somethin for the ASU dub @ AFH. would be great to collect on that This weekend. go remy! go hawks! play free, have fun, & we'll be ok. rcjh

Realize that Ochai does a lot of other things off the ball. He doesn't just stand around waiting for it to come to him And since the other teams key on him (usually their best defender), it opens up CB, DM, JW, and DH/RM. Och is also a great defender himself, so even when he's not doing as well offensively, he's defending as well or better than anyone else.

Used to live 2 blocks from where they're staying. Love Chicago! Let the good vibes roll.

David - Chicago, and that area in particular was so much fun. Couldn’t imagine moving back but it was fun for a time. Don’t imagine the guys get much chance to get out and enjoy the area. It would be an absolute riot if they got to go to Ed Debevics.

Do they normally get a police escort?

Charlie gets to play at least once more at home. Kinda nice that it worked out though I hope we spoil it for him.

Police escort's pretty standard stuff this time of year... Especially in cities as congested and traffic-heavy as Chi Town.

Monday and today were the hard practices. Tuesday was the walk through.

Giordanos is right around the corner from the hotel and across the street from Ed Debevics.

I lived there 1980-1984 at different addresses on Chestnut and Michigan Avenue, all within a few minutes walk of where they're staying (in the same condo building as Jane Byrne for awhile). I think Ed Debevic's must have come along later. Maybe it was the Knickerbocker's piano bar back then. Giordano's was great, but I liked Gino's East on East Superior better:)