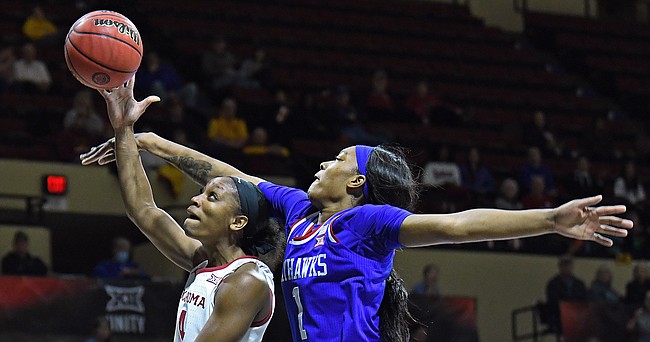 KANSAS CITY, Mo. — The Kansas women's basketball team's 80-68 loss to Oklahoma in the Big 12 tournament on Friday came suddenly for coach Brandon Schneider, who will await the Jayhawks' selection to the NCAA Tournament on Sunday evening.

Kansas (20-9) should qualify for the 68-team event for the first time in nine years after it finished fifth in the Big 12 during the regular season. But after Friday's loss, Schneider hadn't yet given any consideration to the team's plans to watch the selection show.

"That's a good question," Schneider said. "We were not planning on going home, but that's the case now. So, I think when we get back to the hotel here as a staff, we'll meet and discuss it."

Kansas finished 11-7 in the Big 12 and, with the exception of Baylor and Iowa State, the top two seeds in the tournament, beat every other team in the conference.

It is the first time the Jayhawks have finished in the top half of the Big 12 since 1999-2000, when they were fourth in a 12-team conference. They earned a first-round bye in the Big 12 tournament and on Friday were seeking their first appearance in the conference semifinals since the 1998-99 season.

The NCAA Tournament begins Wednesday with a quarter of First Four games, which are needed for the first time this year as the event has expanded to include a record 68 teams.

Kansas is unlikely to be one of the eight teams chosen to play in those four games, meaning its run would start Friday or Saturday at the home of one of the top 16 seeds.

"It does give the players a little bit of time to rest, as we know that Monday, Tuesday, depending on where we go in the bracket, will be extremely hectic days," Schneider said.

Junior center Taiyanna Jackson set a school record for the most blocks in a season when she had six against Oklahoma.

Jackson now has 90 blocks, which are two more than the 88 that Lisa Tate had in 1992-93. A block on Taylor Robertson's 3-point attempt with 1:19 left in the second quarter meant Jackson tied the record, and one on a layup by Madi Williams with 8:54 left in the third quarter gave her the record.

She played 31 minutes and had eight points and 12 rebounds.

"She's without question the anchor of our defense," Schneider said.

Junior guard Zakiyah Franklin also reached a milestone against Oklahoma when her five assists moved her into the top 10 in school history. She has 311 assists, surpassing Mary Myers, who played at KU from 1981-85.

Sophomore guard Mia Vuksic made her first appearance in four games when she played four minutes, all in the second quarter, against Oklahoma.

Vuksic, who had an unspecified injury earlier this season, made two of her five shots — all 3-pointers — to finish with six points. They were the only field goals Kansas made in the quarter.

"We were just looking for some offense," Schneider said. "We had Aniya (Thomas) and Chandler (Prater) both in foul trouble, and they play a matchup zone most of the time, and just looking for a little spark on offense — especially in that second quarter, where we just went really dry."

Schneider almost substituted freshman guard Sanna Strom into the game in the final minute of the first half, but the lack of a dead ball prevented him from doing so. Strom has played even more sparingly than Vuksic as she has totaled 3:29 of action across two games since Dec. 1.

Congrats to Taiyanna for making it to KU WBB's tablet of stone!! Those blocks look beautiful. Not a lot of players can block and at the same time keeping it alive and turning the ball possession over. It's a special skill. We've got a strong case of making it to the dance floor. Let's keep your heads up, ladies!! Y'all are not done yet.... ROCK CHALK!!!!!

Size matters in basketball. To complete in the Big 12 and in the power 5 conferences you must have an effective big in the middle. Taiyanna Jackson has been that presence. She is fun to watch and at times looks nonchalant, but all of a sudden make a burst to score a basket or to block a shot. OU came to play after getting upset by the lady Jayhawks to end the regular season. The 2nd quarter was the Jayhawks undoing getting out scored 11-25 after leading by one at the end of the 1st quarter. The lady Jayhawks need to be firing on all cylinders going into the big dance. Rock Chalk.