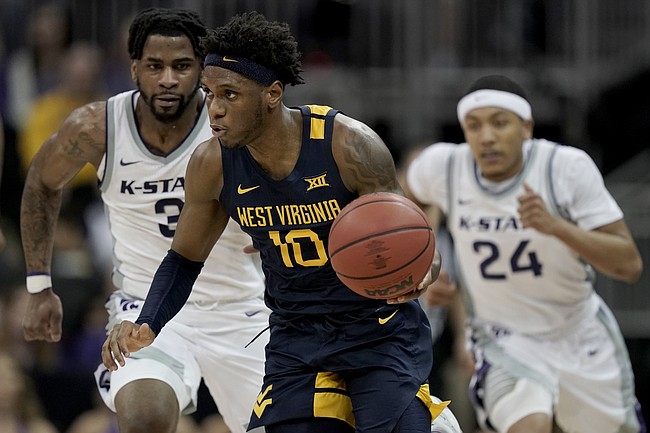 West Virginia (16-16) advances to play top-seeded Kansas on Thursday. The Mountaineers lost at Kansas 85-59 in January and again at home 71-58 about a month later.

Neither team led by more than nine points in this one.

McNeil scored four points during a 10-2 run that gave West Virginia a 69-60 lead with 3:29 left. Curry and Taz Sherman made 3-pointers on consecutive possessions during the run.

Kansas State only made two of its final 10 field goals. West Virginia shot 52.8% for the game.

McNeil reached 20-plus points for the third time this season, going 7 of 10 from the field against the Wildcats. The Mountaineers won their second straight game following a seven-game losing streak.

It was the only Big 12 tournament game of the day as the event was reduced to nine teams because Oklahoma State was placed on one-year NCAA probation and is not eligible to participate in this year’s NCAA Tournament.

Asked after the game about the idea of facing top-seeded Kansas in Thursday's quarterfinal matchup at 2 p.m. on ESPN2, WVU coach Bob Huggins did his best to put all of the pressure on Kansas coach Bill Self the Jayhawks.

"Can I just think about this one for a while," he began. "You know, we have had great games with them over the years. This might be one of Bill's best teams. Actually, I would like to say - make sure you write this - I think Bill ought to win the national championship. I think if he doesn't they probably ought to fire him. No, they're good. We played the first half at their place and played really well, and they came out the second half and we didn't play so well and they played great. I don't remember what happened at home. Seems like a long time ago."

Please update the front-page schedule with the new information, thanks.

“I think Bill ought to win the national championship. I think if he doesn't they probably ought to fire him.”

It appears that Coach Huggins also might be reading the LJW stories and comments, though he doesn’t say it’s an annual expectation.

Can we please get it straight what channel the KU-WVU game will be on? Some sources say the game is on ESPN, and some say it's on ESPN2.

Also, is this the end of the road for Bruce Weber at KSU?

<p>ESPN.com lists ESPN as the channel broadcasting the game.

As for Bruce Weber, yeah I think it's time for him to go. He's just not a great coach unless the players/situation is perfect for him. He doesn't do a great job at player development. They are good defensively, which I would attribute more to Chris Lowry ( SIU gave KU all they could handle in the 2007 Tournament) than Weber.

Kansas will be facing a desperate team today. The Mountaineers will come out "firing on all muskets". Rock Chalk!

I guess that their powder got wet