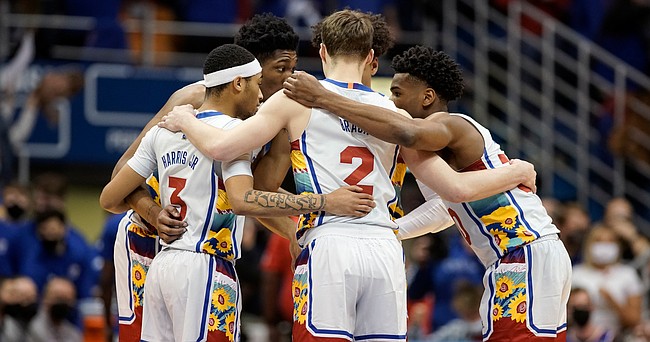 Kansas basketball coach Bill Self said Tuesday that he was looking forward to this year’s Big 12 tournament in Kansas City, Missouri, as much as he has looked forward to any of them during his 19 years in charge of the program.

Part of that comes from the fact that the sixth-ranked Jayhawks (25-6) have not been able to enjoy the environment for a couple of years.

Last season, KU won its opening game in a mostly-empty building and then had to bow out because of COVID-19 issues within the program. The year before that, when the Jayhawks were projected to be the No. 1 overall seed headed into the NCAA Tournament, the Big 12 tourney was called off altogether at the start of the pandemic.

But there’s an even bigger reason that Self and the Jayhawks are excited about the rest of the week and it has everything to do with their competitive nature.

“Obviously, we shared the conference (title) so we have something to prove going into this, trying to be on top of the conference and show that we are the best team,” KU senior Ochai Agbaji said on Tuesday.

Added Self: “Whenever we’ve tied (for the regular season title), I’ve always said let’s go to the tournament and figure this out. So that would be fun to me. We’d have to play very well to even have a chance to do that.”

As the Big 12’s co-champions with 14-4 records, Kansas and Baylor will be on opposite sides of the bracket and only will meet if they both reach Saturday’s championship game.

As the regular season proved, getting to that point will be a dog fight. Even KU’s opening game, which will come against No. 9 seed West Virginia at 2 p.m. on ESPN2, will be played against a team that battled Kansas for three of the four halves they played during the regular season. WVU defeated Kansas State, 73-67, in Wednesday's opening-round game at T-Mobile Center.

Because of Oklahoma State’s postseason ban, there is only one Wednesday game this season. That means Kansas, as the top seed, is the only team that had to wait to find out its first-round foe.

“I do think there’s some advantages to not being the 1 seed in that regard,” Self said. “The advantage would be (your opponent plays) one night and has to turn around and play the next night.”

Regardless of who it is, Self said he thought the Jayhawks would face a team “playing with house money,” in its opening-round game, which will tip off at 2 p.m. Thursday from T-Mobile Center.

Self said the Jayhawks will not sell out and exhaust themselves on Thursday or Friday just to get to the championship game. But if they play well enough to reach that point — 5 p.m. Saturday on ESPN — they then will do whatever it takes to win.

“I don’t think there’s really much at stake,” Self said. “I think it’s pride and maybe a seed line or two. It’s one of the few events you can win and it’s a big deal for all of about maybe 20 hours. After that it doesn’t even matter anymore. But it’s prideful, there’s no doubt about that.”

About that seeding, Self said he thought Kansas and Baylor were both still alive in the hunt for a No. 1 seed in the NCAA Tournament. He also said he thought KU would have to win the Big 12 tournament to lock one up.

While that prize would be welcomed in the Kansas locker room, the Jayhawks are more worried about their current form than their future fate. According to Agbaji, the potential opportunity to face three more quality opponents — all of them in the top 65 in KenPom.com’s defensive efficiency rankings — potentially gives Kansas three more chances to smooth out any wrinkles it’s facing before the NCAA Tournament.

Our little Sunflowers will win 2 two games before they wilt.

Other than a #1 seed not sure what else there is to play for at the B12. It's nice to win it, but it does not really matter too much in the big scheme of things left in the season.

"Whomever is the first opponent" - that would be West Virginia.

i hope we dont win it. win 1 & done. or, we make it & get 🤡d by baylor, again. per usual, outside of AFH were just Not That Good. we have great kids-love em-but truth is: were soft. we have, lol, no energy. id rather get bounced in this tourney and -Hopefully- realize were not that good & come to Play in the ncaas. theres a >50/50 shot we dont make it out of ncaa wknd 1. we got no Dogs & agbaji unfortunately proved that in our final game: needed him, needed to win..and...HE LAYS AN EGG. im hoping for the best, but remaining grounded: well get 3 more wins here on out. "is it football season yet?!" lol RCJH

well that was pretty depressing.

That was hard to read.

I'd also want to remain anonymous as the author of this.

Barry - The trick is to imagine Rodney Dangerfield or someone like that doing it as a monologue. Then it’s rather entertaining.

What’s the O/U for upsets in the tourney?

I do think that winning the tournament is meaningful in two ways. The first is to make sure that there is no less than a 2 seed(highly dependent on the way the committee sets up the regions), and to build a confident momentum heading into the national tourney. That momentum must translate to effort or it will be all for not.