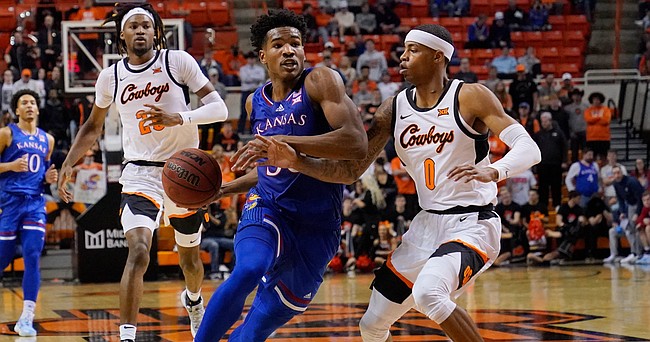 One day after being named the Big 12 Conference player of the year by the league’s coaches, Kansas senior Ochai Agbaji landed his first All-American honor.

Voted a first-teamer by The Sporting News, Agbaji is well on his way to racking up a collection of All-American nods, with most expecting him to land on the first team of many of the postseason All-American teams.

Agbaji has been tracking toward these types of accolades since the opening night of the season, when he dropped 29 points on Michigan State in the Champions Classic last November. That performance proved to be a springboard for a season that featured 17 20-point games and five games of 25 points or more.

As TSN pointed out in its blurb about Agbaji, his defining moment of the season came when he scored 37 points in a home win over Texas Tech. Included in those 37 points was a 3-pointer at the end of the first overtime to save the Jayhawks and force a second OT.

By season’s end, that shot and the Kansas victory it led to, helped KU earn a share of the Big 12 regular season title.

In addition to being KU’s top threat, Agbaji led the Big 12 in scoring at 19.8 points per game while finishing second in the conference in both 3-point percentage (41.1%) and 3-point makes per game (2.9).

His scoring average put him 25th in the nation and his 3-point percentage was good for the 26th best mark in NCAA Division I.

Big 12 Player of the Year

Jerry West Shooting Guard of the Year Finalist (1 of 5)

Naismith Trophy Player of the Year Midseason Team (1 of 30)

Naismith Trophy Player of the Year Watch List (1 of 50)

Happy to hear that Ochai Agbaji is being acknowledged nationally for his efforts and obvious improvements from the years past. Odds are that Oscar Tshiebwe is likely to garner most if not all of the player of the year awards.

Oscar has had a crazy year. Not just a DD, but strong. Glad we only had to face him once - so far.

Also crazy that the other 3 are all BigTen, and that without Jaden Ivey, Purdue, who was getting POTY comments.

1 down 3 to go to be a Consensus All American.

Results are graded as - Three points for first team, two points for second team and one point for third team. No honorable mention or fourth team or lower are used.

I don't get out much so I haven't heard how it works to be a ''Consensus All American" though I've heard that term used before. I've always assumed it's cover for someone basically saying "Everyone agrees with me" to try and lend heft to their opinion without there being any actual math behind the claim.

I'm not trying to be funny (it just accidentally happens often, at least in my head). Are you laying out Rodney Crain's Consensus All American team criteria or is there an organization named Consensus and you are explaining their criteria?