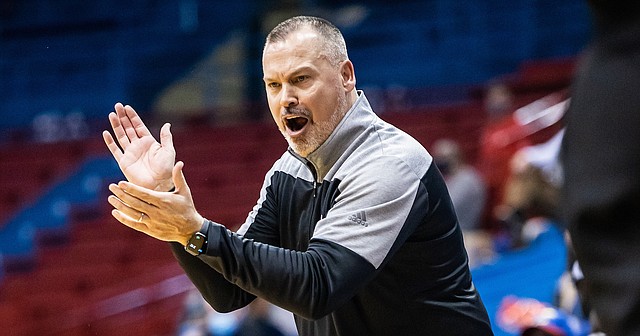 KU coach Brandon Schneider was named Big 12 Coach of the Year in a vote of the conference coaches after leading the Jayhawks to a 20-8 season and fifth-place finish in the Big 12 standings with an 11-7 league record. The KU women were picked to finish last in the preseason coaches poll.

Schneider was joined on the list of postseason honorees by first-team all-conference selection Holly Kersgieter as well as honorable mention picks Taiyanna Jackson and Zakiyah Franklin. Jackson also landed one of five spots on the Big 12's all-defensive team, making her the first player in program history to earn a spot on the defensive specialists' squad.

“I’m proud of our players and very happy that the nine other coaches in our league felt like we had players who performed consistently enough to deserve recognition,” Schneider said in a news release announcing the honors. “We see every individual honor as team recognition because we play a team sport and these awards are a testament to our players and our program.”

After struggling to climb out of the Big 12 cellar during his first six seasons in charge of the program, Schneider led the Jayhawks to their best conference finish in years. KU has 20 wins heading into the postseason for the first time since the 1999-2000 season, which was also the last time the program won 11 Big 12 games.

Schneider is the first KU women's coach to be named the Big 12 Coach of the Year since Marian Washington received the honor in 1997, the first year of the conference.

As for his players, Kersgieter picks up Big 12 postseason recognition for the second consecutive season after leading the Jayhawks and ranking ninth in the Big 12 in scoring at 13.6 points per game. The junior guard also ranked fourth in the league with 51 steals. Kersgieter led KU in scoring 13 times this season and recorded double-doubles against Oklahoma State and Kansas State during conference play. She surpassed the 1,000-point milestone for her career on Feb. 12 and is currently 27th on KU’s all-time scoring list with 1,068 points.

Franklin's all-Big 12 recognition was the second of her career. She was named to the Big 12'a all-freshman team in 2020. She finished the regular season as KU’s second leading scorer at 12 points per game while leading the Jayhawks and ranking eighth in the Big 12 with four assists per game.

Jackson was honored by the Big 12 during her first season with the Jayhawks. Her 84 blocked shots put her fourth on KU’s single-season list and second in the Big 12 this season with an average of three blocks per game. In Big 12 play, her numbers were even better at 3.4 blocks per game, which is one full block per game higher than any other player in the league. Jackson also led the Jayhawks with eight rebounds per game and ranked fourth in scoring at 8.8 points per game and second on the team with 48 steals.