Kansas basketball stays at No. 6 in latest AP poll 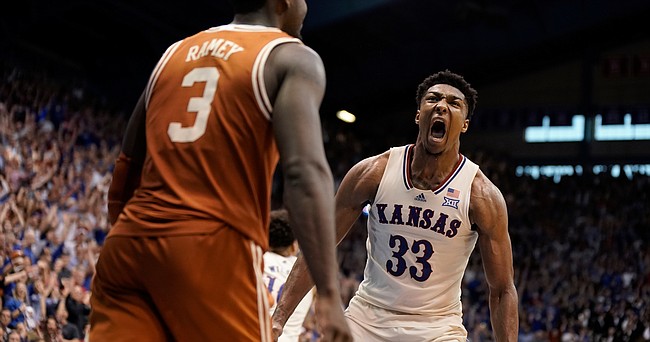 A 2-1 week that featured Kansas splitting with TCU and topping No. 21 Texas to win a share of the Big 12 title kept the Jayhawks in the No. 6 spot in the latest Associated Press Top 25 poll.

KU has been in the AP Top 10 every week this season.

Despite losing to both KU and Baylor last week, the Longhorns fell just one spot to No. 22 in the latest poll.

Baylor, which shared the 2021-22 regular season title with Kansas, held onto its spot at No. 3, behind Gonzaga and Arizona, which also stayed in the same spots as last week at No. 1 and No. 2, respectively.

Texas Tech, down two spots to No. 14, is the fourth Big 12 team in this week's poll. No other Big 12 teams even received votes.

Speaking of votes, the KU women's team, which upset No. 19 Oklahoma on the road over the weekend, received three votes in the new women's AP Top 25, up from the one vote they got a week ago.

Brandon Schneider's squad secured its 20th win and now appears to be a lock for this year's NCAA Tournament.

In other news in this week's men's poll...

Tennessee kept winning against a demanding schedule of top teams in the Southeastern Conference. That has pushed the Volunteers to their highest ranking this season in The Associated Press men’s college basketball poll.

While Gonzaga, Arizona and reigning national champion Baylor remained atop Monday’s poll, Rick Barnes’ squad tied Purdue for No. 9 to crack the top 10 for the first time this season. That came after the Volunteers (23-7, 14-4 SEC) closed the regular-season schedule by beating No. 15 Arkansas despite blowing most of a 24-point lead.

Still, it marked their fourth straight win and ninth in 10 games. That stretch has included wins against No. 4 Auburn and No. 5 Kentucky, sending the Vols to this week’s SEC Tournament in Tampa, Florida, as the No. 2 seed.

Defense has been a strength, with the Volunteers ranking third nationally in KenPom’s adjusted efficiency by allowing 87.4 points per 100 possessions. They also rank seventh by getting a steal on 13.6% of defensive possessions and 18th by blocking 14.1% of opponents’ shots.

They also rank 17th in Division I by forcing 16.2 turnovers per game.

“It’s been hard, I can tell you,” Barnes said of the SEC after the Arkansas win. “I think we’ve been able to learn from a lot. I think we’ll learn from today. And we need to, because now you’re in tournament play. If you have letups and keep throwing lifelines at the wrong time, it ends your season.”

The Volunteers’ four-spot climb in the Top 25 tied No. 13 UCLA and No. 16 Illinois for the week’s biggest jumps.

Mark Few’s Bulldogs claimed 52 of 61 first-place votes to hold the No. 1 ranking for the fourth straight week and eighth time this season going back to the preseason poll. Gonzaga faced San Francisco on Monday night as it openend play in the semifinals of the West Coast Conference Tournament.

The Wildcats stayed at No. 2 for the third straight week under first-year coach Tommy Lloyd and claimed six first-place votes, while Scott Drew’s Bears – who held the top spot for five weeks earlier this season – took the other three.

Auburn and Kentucky rounded out the top five, followed by Kansas, Duke, Villanova, Purdue and Tennessee.

Eight teams climbed from their positions last week, including Villanova rising three spots after beating No. 11 Providence and Butler last week, and Murray State moving up three spots to No. 19 after winning the Ohio Valley Conference Tournament.

Southern California had the biggest fall of the week, tumbling five spots to No. 21 after losses to Arizona and UCLA. No. 18 Houston fell four spots after losing to Memphis in its regular-season finale. In all, 10 teams slid from the previous week.

Five teams stayed in the same position, with No. 6 Kansas and No. 24 Iowa holding their position along with the top three teams.

No. 23 Colorado State joined No. 25 North Carolina as the poll’s new additions, bumping Ohio State and Alabama from last week’s rankings. The Rams spent four weeks in December and January in the poll, peaking at No. 20.

The Tar Heels opened the year at No. 19 but fell out of the rankings by Thanksgiving – part of the Atlantic Coast Conference having just one ranked team in the Blue Devils for most of the season.

They hadn’t received any votes in the past six polls, but jumped back in Monday after winning at Duke on Saturday in retiring Hall of Famer Mike Krzyzewski’s final game at Cameron Indoor Stadium.

“I would say our expectations never changed,” UNC junior big man Armando Bacot said. “I don’t know if that’s us being delusional or just confident. But we always felt like we were a great team. ... I don’t want to be complacent and I don’t want to be too excited because we’ve had big wins and haven’t responded in the right way.”

The Big 12, SEC and Big Ten led the way with four ranked teams each, followed by the Pac-12 and Big East with three.

The ACC joined the WCC with two ranked teams each, while the American Athletic, Ohio Valley and Mountain West conferences each had one.

I realize the story line is the ACC is down this year, but amazed that a 20+ W UNC, and finishing second, had been considered a bubble team. Must’ve been a highlight to end Coach K at home. Even better than closing the gyms to our E&W with Ws.

Agree Dirk, I watched most of that game and NC was the better team. Leaky, and Bacot were great in that game.