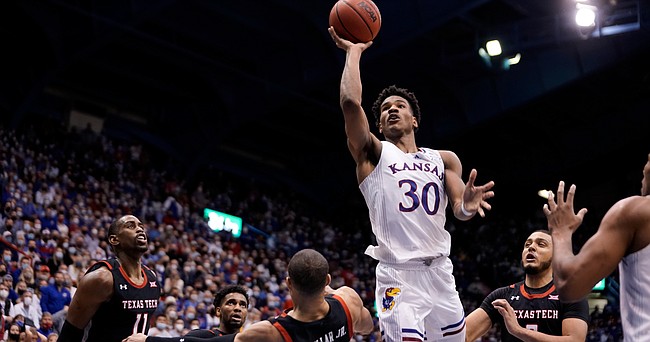 Kansas guard Ochai Agbaji (30) gets inside for a shot against Texas Tech during overtime on Monday, Jan. 24, 2022 at Allen Fieldhouse.

For years, Kansas basketball coach Bill Self has said the Big 12’s player of the year honor should go to the best player on the best team.

On Sunday, Self’s conference counterparts demonstrated they were in agreement when they named Kansas senior Ochai Agbaji the 2022 Big 12 Player of the Year.

“So often, postseason accolades come from not only individual success but primarily from the team’s success and we’re proud to get a piece of the Big 12 championship,” Kansas coach Bill Self said in a Sunday news release. “Ochai has had a great year and deserved being a unanimous selection for player of the year and All-Big 12 first team.

Agbaji was one of two unanimous picks by the conference’s coaches for first-team honors, joining Texas Tech’s Bryson Williams with that distinction.

"With Christian on second team, David and Jalen on third team and Dajuan honorable mention, and on the all-defensive team, all five starters were recognized and deservedly so," Self said. "With KJ being on the all-freshman team, we are proud to have six players honored. I’m happy for them, as this is more of a reflection their individual performances and the team’s accomplishments.”

His eight-point outing on Saturday, in sixth-ranked Kansas’ 70-63 overtime victory over No. 21 Texas, was the only time all season that he did not crack double digits in scoring. And he scored six of his eight points in overtime.

Agbaji also won four player-of-the-week honors throughout the regular season and is considered a likely first-team All-American and still in the running for national player of the year.

In the 26-year history of the Big 12, Kansas has fielded 34 all-Big 12 first team selections, which is more than twice as many as any other school.

KU has had a first-team honoree in 23 of the 26 seasons of the league and leads the Big 12 with an all-time high 141 student-athletes named to all-Big 12 teams. Texas is second with 112 and Baylor ranks third with 101 selections.

Two big surprises: that David made third team, and that KJ made the all-freshman team.

One pretty big surprise: that Christian only made the second team.

As for Ochai, it's the first of many well-deserved awards.

I expected each Jayhawk to land exactly where they did - except for the surprise of KJ. I haven't researched all the freshman and their stats on the other Big-12 teams. But here's a possible explanation: this year was an anomaly with the HUGE number of immediately eligible transfers and 5th year seniors.

As a result, this year's freshman class did not get nearly as much collective playing time - with many talented freshman (like KJ) waiting their turn for next year. This year's group was selected out of a smaller sample size of minutes, and likely weighted more on potential than in the past. Congrats KJ!

I heard Fran Fraschilla say he expects huge things from Christian Braun next year. He could very well be conference player of the year! Back to back would be an amazing sequence akin to Mason/Graham time period. Jalen could be up there as well.

So blessed to be a Kansas fan, even if it is hard on the nerves to watch so many nail biters.

self:"I’m happy for them, as this is more of a reflection their individual performances and the team’s accomplishments.” umm, what? this doesnt quite make sense. keep up the good work, boys- rcjh

Self speaks in a "stream of consciousness" pattern. He will pause and break mid-sentence, and frequently interrupts himself with some other thought fragment. It's just his style, and his speech pattern. But yeah, sometimes when he gets quoted verbatim, the comment makes no sense on paper. Much easier to get the context from a video clip.

Congrats Ochai! Well deserved. But you still have a LOT OF ROOMS TO IMPROVE. Don't settle with CPOY NPOY, whatever it is. Keep working hard. Model your moves from Ja Morant. Ochai is still so faaaar away from NBA ready. Believe me, folks. He'll probably end up in G-League or playing overseas. Knocking down 3s, dunks on lobs, they don't mean a jack if he wants to survive in the league. Trust me, Ochai. Work on your dribble drive and how to get rid of defender - i.e. learn to dribble low & fast, change direction, head fake, hesitation moves, cross over. His ball handling is still too slow. His got all the tool, he just needs to tune & juice them up.

How could any D1 schools, including KU miss this guy??

Was there no player of the year designation before the 1970’s? Surely Kansas had some of the best players, like Clyde.

Coaches’ selections mean the most (versus AP sports writers/broadcasters for example) given they must create a game plan against opposing team's players. Obviously, all 5 KU starters are deserving of their various recognitions. Congratulations to KJ Adams for earning a spot on the Big 12 All-Freshman team. I think the transfer portal has a bit to do with a freshman’s success and impact this year. Many teams went with experience recruited via the portal instead of developing and depending on youth. For example, KJ Adams played in 29 games this season and average 5.3 minutes, 1 rebound, 0.3 assists, 0.2 blocks, 0.1 steals, 0.6 fouls, 0.2 turnovers, and 1.3 points per game. Clearly, he has a significant upside going in the seasons to come. Rock Chalk.

Matt, on a sourer note, I heard a rumor that the Independent Accountability Resolution Process’ (IARP) investigation and ruling is complete and that a penalty is coming this week if not today. One rumor posted is that the panel will hand down a 2-year post season ban against Bill Self and Kurtis Townsend. Apparently, their ruling will be announced before the beginning of Big 12 tournament. Who knows if the rumor is accurate but apparently the announcement of a penalty against KU basketball program and Self is eminent. What say you?

Hat tip to David for making himself so valuable whether appreciated by all or not.

Chris Beard is heading to kinkos. Who’s the other guy that locked up Ochai, or were both of those against ut?

In Steve we trust 😂

I realize that Baylor had to replace a national title roster and contend with injury issues throughout the year and still won a share of the conference title, but Scott Drew is a puzzling choice for coach of the year. It also bothers me as a KU fan because there have been several seasons, particularly during the streak, where we had to replace the entire or a majority of the starting lineup and still went out and won the conference but Self didn't win anything and it went to someone like Weber because they finished 6th instead of a projected 10th.

Watching broadcasts and reading articles/comments throughout the season, it seemed like the clear frontrunners were either Mark Adams at Tech or TJ Otzelberger at ISU and no one even mentioned Drew as an option. I realize that the coaches (or their SIDs) are voting on this one and trust that they know better than most, but I don't think they got this one right. I'd be curious to see the full breakdown of votes received and just how close this one was. Hopefully the writers reward Adams as the COY in their awards later this week because the job he did should absolutely be recognized.

"It also bothers me as a KU fan because there have been several seasons, particularly during the streak, where we had to replace the entire or a majority of the starting lineup and still went out and won the conference but Self didn't win anything and it went to someone like Weber because they finished 6th instead of a projected 10th."

This is why Bill Self has a "lifetime" contract and all those other guys are always a few Ls from the hot seat.

Season awards are fine, am happy for anybody that gets singled out.

I am fairly confident that anyone would trade their award for a National Championship ring.

Don't really care about Self or Drew as coach of the year. Right now KU and Baylor are 1a and 1b. I would love to play them in the final four. Neutral floor and fan bases. Winner gets to play for a ring.

Defensive Player of the Year had to be from a hat, or covered eyes and pointed on the board with a pen who would win. This has to be the most horrendous vote for DPOY. 1 guy didn't start a game all year (and missed like the last 4 games of the conference season). 1 guy was on the last place team, and ranked 21 in blocks and 21 in steals. The other guy played for a team that was disqualified. Seriously these were the winners?

How did Ramey w/ UT not get selected? He covered OA like a wet blanket!