Kansas junior Christian Braun hits 2 big shots vs. TCU but aims to be more aggressive in games to come 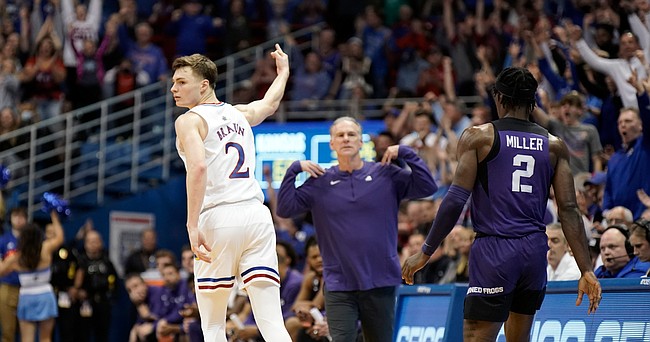 Kansas guard Christian Braun (2) signals "three" as TCU head coach Jamie Dixon signals for a time out after Braun hit a three-pointer late in the second half on Tuesday, March 3, 2022 at Allen Fieldhouse.

On one hand, KU’s second-leading scorer made every field goal he attempted, knocking in four shots total including a 2-for-2 mark from 3-point range.

On the other hand, for a guy who averages nearly 11 shot attempts per game, taking just four shots in 35 minutes could be viewed as a little too passive.

“I didn’t do a very good job of being aggressive,” he said after scoring 12 points and grabbing 6 rebounds in KU’s latest win. “I’ve got to put up more shots than four. I only shot two 3s again today. So, I just have to do a better job of starting early and that’ll help our team (and) open other stuff up for (my teammates).” 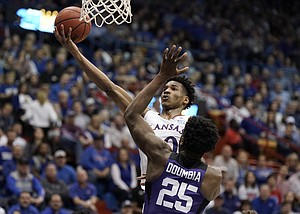 View a gallery of images from Thursday night's game between the Kansas Jayhawks and TCU Horned Frogs.

Kansas coach Bill Self also would like to see Braun be more aggressive. But Self viewed Thursday night’s outing through a more sympathetic lens.

Rather than roasting Braun for taking just four shots and not asserting himself the way he’s capable of doing, Self looked closer at why Braun’s shot attempts stayed low.

“He wasn’t open,” Self said of Braun. “Their length and interchangeable parts keep you from shooting shots with space and time.”

With explosive athletes capable of playing the 2, 3 and 4 positions, Self said he knew that Thursday’s rematch, even in the friendly confines of Allen Fieldhouse, would be another dog fight.

“We didn’t give our best effort down there (on Tuesday), but we could’ve given our best effort and still come up short,” he said. “That’s a good basketball team, and we don’t match up well with them.”

Braun and his teammates knew that going into Thursday’s game. So rather than putting the entirety of their emphasis on players and execution the Jayhawks made this one about pride and effort. 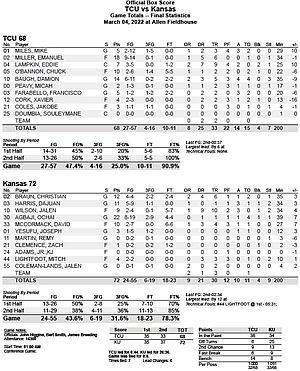 “(On Tuesday), they were the more aggressive team just overall, whether that was offensive rebounding or defense,” Braun said. “We knew that we kind of had to punch them back. They punched us at their house so we just had to respond. We knew that this game was really important for our goal and we came out and won a big game.”

Despite his slow start and limited number of shots, Braun rallied after spending some time on the bench in the second half. During the stretch when Braun sat, KU point guard Dajuan Harris Jr. and reserve guard Joe Yesufu both hit 3-pointers that helped turn the tide in KU’s favor. And the two 3-pointers that Braun hit were both crucial and the result of the aggressive attitude by his teammates.

“I just knew that I had to come in and play better,” Braun said.

His first 3-pointer of the night came with 9:03 to play and gave KU a 56-55 lead. That was the Jayhawks’ first lead since 39-37 early in the second half. After taking a pass on the right wing, he dribbled twice to his left, saw daylight and eased into the shot that fell softly through the net.

Braun’s second 3-pointer came with 3:26 to play and, in many ways, was the knockout blow. This one was wide open from right in front of the bench off of an extra pass from Jalen Wilson and a hockey assist from David McCormack in the post. It put Kansas ahead 67-61, giving the Jayhawks any kind of real separation for the first time since early in the first half.

“I didn’t think CB played particularly well at all — he or Jalen — until about midway through the second half and then I thought they both played very well to end the game,” Self said. “Very well. CB made a couple of big plays.”

After the victory, Braun credited his teammates for pushing him through the quiet night.

“These guys told me I just need to shoot the ball,” he said. “I had a couple shots down the stretch that were open and I hit them. That’s what I need to do throughout the whole game so we’re not in that position. They do a really good job of keeping my mind in the game, but I’ve got to do a lot better than what I did today.”

Kansas' Bill Self on beating TCU, Dajuan Harris' emergence and the Big 12 title by KUsports.com

lol. this is Fkn ridiculous. we have ALL season to be aggressive, all the hype leading into This game: come out hot, be aggressive, get a lead...cant do it. CANT DO IT! but we will Next game! lol. ok. the writing is ON THE WALL w this team, unfortunately: we will get bounced in the tourney, likely wknd 1, bc we "didnt come out w energy" & likely missed foul shots & bunnies. Elmer Fudd, aka Dmiss, will be our downfall. love to be Wrong, but its just too apparent. on to 2022-23! good luck guys. maybe TRY to bring some intensity..lol. 1 game, all year, 1st half @ bay we bring it, then foot off the gas, "we got complacent" (even After All that Focus/Energy talk!!) lol. we need a Shrink for this team. good luck guys. will be fading Hard in the tourney(s). we r SOFT. prove me wrong. lol 👍

Great write-up Matt. This applies to JWil, too. He's not consistent, but at least can help in scoring depth.

"With explosive athletes capable of playing the 2, 3 and 4 positions, Self said he knew that Thursday’s rematch, even in the friendly confines of Allen Fieldhouse, would be another dog fight."

============= Shouldn't we recruit these kind of players? Otherwise, we'll keep getting the same issue, year after year:

“He wasn’t open,” Self said of Braun. “Their length and interchangeable parts keep you from shooting shots with space and time.”

But I thought that the guys who joined the team in the 2021 offseason WERE the type of players we needed. Remember how Self said after we got ass-blasted by USC, "We need more athletic players" or something to that effect? I thought we had gotten more athletic players. Or have we Jayhawk fans been sold a bill of goods by our underachieving head coach?

I wouldn't be that harsh, he's still a better coach than most D1 coaches (but I still don't think he deserves a lifetime contract). Yes, I remember he said that, the problem is Caffe is athletic, he's RS. Sidney Curry is athletic, but coach BS preferred DMac. Next year, the team seems to be more athletic. KJ is athletic, but is useless if team doesn't know how to utilize his strength. Coach BS offense doesn't encourage internal passing at all. He'd rather have guards dribble drive and finish the layups even though the big is wide open under the rim. SMH...

Self should tell every player before every game what he told Harris. That seemed to light the fuse with him.

This team is just last season’s team only with Big Dave hobbling on a wounded foot but without the one player who could play defense. Marcus Garrett.

Bryce, Bill is in same situation as football has been for 12 years now (though of course not to same level of severity) Season ticket revenue is down so they’re asking him to hype it. Is it compromising? Absolutely it is.

Pizzaboy - Can’t come out hot? Didn’t they have a 10 point lead or something like that by the first media time out? Seems hot to me. Didn’t sustain it, but they did indeed come out hot. Oh well, it’s easier to complain and criticize regardless of the facts.

Pizzaboy is great! I love it!