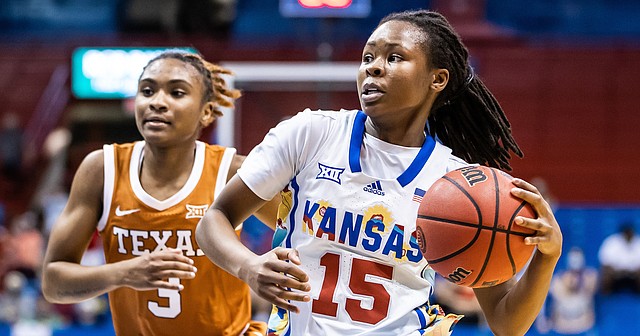 Kansas guard Zakiyah Franklin blows by a Texas defender during KU's home loss to the Longhorns on Wednesday, March 2, 2022 at Allen Fieldhouse.

The victory over Texas earlier this season suggested something special was happening for the Kansas women's basketball team. A second, on Wednesday, would have cemented it.

Instead, the Jayhawks were defeated by the ninth-ranked Longhorns, who claimed a 70-60 victory at Allen Fieldhouse on the strength of their inside play, defensive tenacity and late free throw shooting.

But Texas made nine of 11 free throw attempts in the final 2:07, stymying a final push from KU that included back-to-back 3-pointers by Kersgieter that pulled it within five.

Much of that was Lauren Ebo, the senior center who transferred to Texas from Penn State prior to last season.

Ebo, who finished with 12 points and seven rebounds, scored eight of them within the first 4:11 of the second half — part of a 13-2 run that the Longhorns used to claim the lead for good.

She said Texas coach Vic Schaefer made it well known that she and forward DeYona Gaston, who finished with 10 points, were not productive enough in the paint at halftime.

"I came out thinking like, 'We have to attack,'" Ebo said. "(Schaefer) noted that our inside game was nonexistent, so I think that was one of the main keys — getting the ball inside, or if I wasn't scoring, just working inside out, and I think that really helped to get our offense turning."

The Jayhawks surprisingly won the first meeting between the teams on Jan. 12, when they claimed a 70-66 overtime victory for their first win against a ranked conference opponent on the road in 10 years.

That win, and a string of seven in a row against Big 12 foes throughout February, has put Kansas in a strong position to make the NCAA Tournament for the first time in nine years.

But it is closing the regular season with the toughest four games of any team in Division I, all against teams that have thus far been ranked in the top 10, and a win over any of them would have sealed its case for an at-large tournament selection.

Now, it'll have to wait for the regular-season finale, Saturday at No. 19 Oklahoma, to claim one.

"We knew that this was going to be a really difficult stretch," Schneider said. "I'd like to think that even though we came up short in these games, we got a lot better."

Kansas and Texas were tied at 14 after the first quarter, when Allen-Taylor made a fastbreak layup with 28.6 second left after her team failed to make a basket for much of the final five minutes.

Allen-Taylor then scored next two baskets after the break, and Texas inched its lead to 21-16 with 6:31 left before halftime before the game began to devolve into a foul shooting contest.

Texas, a strong defensive team under Schaefer, turned to a full-court press midway through the quarter, but the Jayhawks handled it deftly. They embarked upon another run, this time 8-0, to reclaim and push the advantage to 24-21 with 2:05 left in the quarter, and Franklin's pair of free throws sent Kansas into halftime with a 27-25 lead.

That's when the Longhorns took over — but they weren't fully clear just yet. The Jayhawks clawed back from a 38-29 deficit and scored six points in the final minute, including three points each from Franklin and Kersgieter, to pull within two at 45-43 as the fourth quarter began.

Allen-Taylor and Ebo then picked up their fourth fouls on consecutive possessions two minutes into the fourth quarter, seemingly giving Kansas an opening. But nearly every point was scored from the free throw line over the next three and a half minutes, and while Kersgieter's layup, made off a home run inbounds pass from Franklin, trimmed KU's deficit to one, Texas outscored its opponent 15-6 to close it out.

Ioanna Chatzileonti scored 10 points, and Thomas and Brosseau each finished with six. Kansas shot 37 percent and made 21 of 27 free throw attempts.

The Jayhawks, who wrap up the regular season Saturday against the Sooners, lost 82-68 in Norman, Oklahoma, on Jan. 8 in their Big 12 opener.