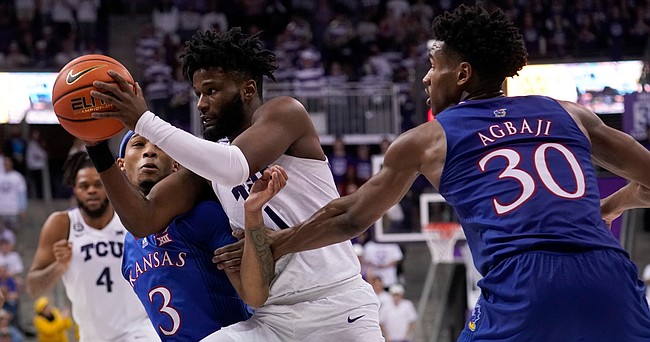 Kansas guard Dajuan Harris Jr. (3) and and guard Ochai Agbaji (30) defend against a drive to the basket by TCU guard Mike Miles (1) in the second half of an NCAA college basketball game in Fort Worth, Texas, Tuesday, March 1, 2022. (AP Photo/Tony Gutierrez)

There are a dozen different reasons the sixth-ranked Kansas men’s basketball team lost in ugly fashion on Tuesday night at TCU.

But the biggest area that KU coach Bill Self wants to see corrected before Thursday’s rematch at Allen Fieldhouse has nothing to do with boxing out, making jump shots or better ball movement.

“I think this is more between the ears than it is other things,” Self said after Tuesday’s 74-64 setback that dropped the Jayhawks a half game behind Baylor in the Big 12 standings. “We’ve just got to compete harder.”

In many ways, that approach could make the quick turnaround a little easier. After all, Kansas (23-6 overall, 12-4 Big 12) already has a good, fresh look at TCU’s personnel, and it wasn’t the Jayhawks’ scouting report that was the issue on Tuesday night. It was their execution of the game plan.

“They’re a great rebounding team,” Kansas forward David McCormack said after Tuesday’s loss, which featured TCU dominating the glass. “It’s definitely a quick turnaround. I think we know what we need to do as far as scouting report and we know that we just need to compete.”

“We have to want it more,” Wilson said after scoring 13 points and grabbing seven rebounds in the loss.

There’s no doubt that Kansas will have to be better on the boards than they were in Fort Worth if they want to win the rematch. Both before and after Tuesday’s game, Self marveled at the collection of athletes that TCU coach Jamie Dixon had put together, many of them coming through the transfer portal during the offseason.

Six different Horned Frogs players grabbed four or more rebounds in their recent win, with center Eddie Lampkin leading the way with nine in 21 minutes. Four of his nine came on the offensive glass, where TCU rebounded 19 of their 39 misses throughout the game.

The Horned Frogs' activity on the offensive glass kept Kansas off balance and looking up at the TCU athletes playing above the rim and led to a 13-5 advantage in second-chance points. In a game won by 10, that eight points loomed pretty large.

KU’s issues on the glass made their defense look worse than it probably was. TCU shot just 42% for the game and made just 3-of-15 shots from 3-point range. Both are numbers that would typically lead to a Kansas victory.

“It all just goes down to rebounding,” Wilson said. “We were getting stops. They were just getting offensive rebounds. I don’t think it was a defensive breakdown. It was more just rebounding.”

While KU’s emphasis on the glass figures to be at an all-time high at Allen Fieldhouse in the rematch, it’s pride that figures to be the most important factor.

Pride does play into rebounding in many ways, of course. But for a team that still can win a share of the Big 12 regular season title with wins over TCU on Thursday and Texas on Saturday, the Jayhawks appear to be more focused on responding to their ugly outing in Fort Worth with better effort, energy and intensity.

“Defending the fieldhouse is really what it’s about,” said McCormack after Tuesday’s loss. “And making sure we all collectively understand what’s at stake.”

Added KU senior Remy Martin in his pregame radio interview with Brian Hanni: “We just need to go out there and win and everything else will take care of itself.”

It is difficult to point out bad playing by only one or two. Give credit to TCU they simply wanted to win and with their fans did so, We need to win both of the final two games to tie for the championship. Baylor will probably win their final game.

With the conference title on the line...why didn’t the Jayhawks TRY HARDER?

Hard to win playing 4 vs 5 on offense.

23-6, top 10 all season, # 4 ranked offense, 1 or 2 seed in the tournament. In the 4 games we've been dominated on the defensive boards (giving up a lot of offensive rebounds), we've lost. What's Harris got to do with that?

Harris, do we have a Harris on our team? What is his number Shannon I will look for him tonight!!! We need a PG, is he a PG???

I have seen two start times for the next game: 4pm and 7pm. I'm guessing that it is 7pm and the 4pm , that is stated on the Upcoming/Next Game info here, is incorrect.

It is 7 p.m. No idea how that 4 p.m. time got plugged in there. We put the schedule in months ago and it could've been as simple as hitting the wrong key and never looking at it again. It's fixed now. Might take a second to appear correctly on the site. Thanks for pointing that out and sorry for the confusion. - Matt

Hopefully coaching staff still has time to go over the tape vs TCU part 1. Mr. Newell, in his tweets, highlighted some plays that could've helped us improve scoring. @Matt, if you can explain kenpom.com's ranking on KU's adjOE, that'd be awesome. I think kenpom's calculation is a bit different than reality. I'm not convinced KU's offense belongs to top 10. It seems 75-80% of the games played, we look labor on offense. Does transition buckets count? But our D is so so. Anyone?

How it is calculated is on KenPom's site. You can read about it if you want to know more. All buckets count. It takes a lot into account to come up with a very accurate ranking. Certainly more accurate than "they don't look like #4". It may look that way to you because it's not based on historical teams, it's just compared to other teams this year. If everyone labors and we labor less (while scoring a lot of points) then we have a high ranking relative to other teams.

Thanks Shannon, as always, for the perspective. See my answer to Chad below.

Or Steven, Shannon you verison of reality might be different, than you know actual reality.

I know you don't how to do math and other things, but asking Matt to help you, for free, seems a bit of a reach. He is busy doing adult stuff.

Offensive Efficiency probably relies on points per possession, ppg, and scoring rate during a particular game. Whether KU labors offensively during said game isn't factored into the actual metric, that's just visual observation. A two-point basket, whether scored on a 25 second half-court possession, offensive rebound putback or transition all count the same in the metrics. If you score a lot of transition points or early in the shot clock on secondary break, that's actually very offensively efficient. Free throws count too, so if Ku is going to the line more and making them, they may not appear to be efficient while watching, but look up at the scoreboard and see they have 70+ plus points. The points all count the same no matter how they were obtained. I say this knowing I could be very wrong. I'm sure there are analytics that dive deeper to give a more clear picture. Kansas averages almost 80 points per game on the season, putting them in the top 30 nationally, so the metric isn't too far off I don't think.

Awesome, Chad. Thanks for taking time to explain. So, based on the formula you quoted below, compared to what's observed during the games played, I'm not convinced we're efficient. That's why I still don't believe in kenpom's rating system.

Math is not a strong suit of Steve and Shannon. They have no idea what you are talking about. Logic, facts, things that are real, it just doesn't take. Now if you can show the Earth is flat you might have a chance to get their attention.

Stev you just proved my point thanks I guess

Any effort tonight would be a better effort.

Two things I have harped on all season, turnovers and free throws. Missing the front end of a free throw is like a turnover. If you check the stats, there have been just a very few games where we have had fewer turnovers than the other team. CB was our leading FT shooter but the past few games, he has been a brick layer at the line. The team has to have better effort plain and simple.