UCLA, USC accepted into Big Ten; moves come as Big 12 is in process of rebuilding 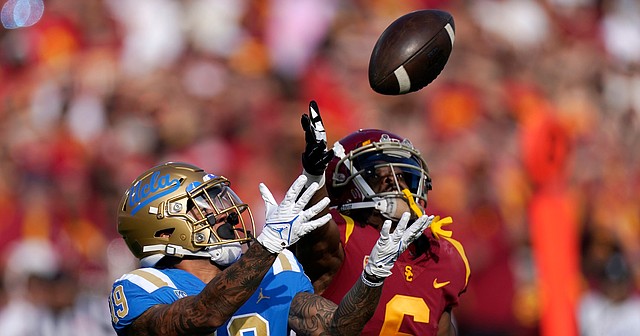 UCLA running back Kazmeir Allen, left, makes a touchdown catch as USC cornerback Isaac Taylor-Stuart defends during the first half of a game on Nov. 20, 2021, in Los Angeles.

Nearly a year after Texas and Oklahoma shook up the college sports landscape by deciding to leave the Big 12 for the SEC, UCLA and USC have done so again.

The two tradition-rich Los Angeles universities are leaving the Pac-12 for the Big Ten beginning in 2024.

Big Ten presidents and athletic directors met Wednesday to discuss the matter, according to multiple reports, after the schools approached the conference about applying for membership.

"Our storied athletics program, based in one of the biggest media markets in the nation, has always had unique opportunities and faced unique challenges," UCLA athletic director Martin Jarmond wrote in a statement. "In recent years, however, seismic changes in collegiate athletics have made us evaluate how best to support our student-athletes as we move forward."

Driving their desire to leave the Pac-12 is not just finances but also the pursuit of a higher level of competition, greater brand awareness — including NCAA legislation that allows players to profit off their names, images and likenesses — and concern over the future landscape of college athletics.

The geographic boundaries long observed by athletic conferences, along with longstanding rivalries between schools, have eroded in recent years mainly because of the skyrocketing revenues associated with media rights contracts.

"This is the most volatile and uncertain era in the history of American collegiate athletics," USC athletic director Mike Bohn wrote in his own statement. "USC must ensure it is best positioned and prepared for whatever happens next, and it is our responsibility to always evaluate potential opportunities and be willing to make changes when needed."

By adding UCLA and USC, the Big Ten can counter the SEC's expansion to 16 teams following its additions of Texas and Oklahoma with growth of its own while entering the United States' second-largest media market, Los Angeles.

The additional exposure of the Big Ten in that region should drive up the value of the conference's next media rights contract. Sports Business Journal reported in early May that the Big Ten could command a record-setting $1 billion per season from broadcast partners beginning next year, when its six-year, $2.65 billion media rights deal expires, giving each university roughly $71 million per year — and that was before UCLA and USC's intentions were known.

By comparison, the Pac-12's media rights deal, which was signed in 2012 and expires in 2024, was for $5.9 billion over 12 years. The Associated Press reported the conference distributed only $19.8 million per school in fiscal year 2021 while the Big Ten's per-school distribution was $46.1 million and the SEC's was $54.6 million.

Although the value of such contracts has changed significantly in the past decade, the Pac-12 would likely be looking at a smaller offer from broadcasters without the draw of UCLA and USC than the one it would receive with them still a part of the conference.

"While we are extremely surprised and disappointed by the news coming out of UCLA and USC today, we have a long and storied history in athletics, academics and leadership in supporting student-athletes that we're confident will continue to thrive and grow into the future," read a statement from the Pac-12.

The Big 12 responded to the decisions of Texas and Oklahoma to depart the conference, which is scheduled to happen in 2025, by adding BYU, Houston, Cincinnati and UCF — a quartet of universities that does not come close to equaling the cachet the two departing schools offer. Those four will join the Big 12 effective July 1, 2023, creating a 14-team conference for up to two years.

Although it's unclear how the decisions by UCLA and USC will affect Kansas, which has tried to put itself in position to not be left behind by conference realignment, it will once again find itself at a crossroads. The Big Ten has long been regarded as a reasonable landing spot for the university, based on geography and academics, should a future in the Big 12 at any point be deemed unsuitable. By adding UCLA and USC, though, the Big Ten is seemingly putting that possibility, however realistic, on hold.

The Big 12 on Wednesday named Brett Yormark, an executive with Roc Nation and a former CEO of the Brooklyn Nets, as its new commissioner. Yormark is expected to make his first appearance at Big 12 football media days, a two-day event beginning July 13, before formally replacing Bob Bowlsby on Aug. 1.

Kansas won't be the only school left wondering about its future now that UCLA and USC have ended up changing conferences. The ACC, which stretches from Syracuse to Miami, overlaps geographically with the Big Ten and the SEC and has several schools that may be attractive should either conference continue to expand. Then there's Notre Dame, a university with a storied football program that has staunchly remained independent even as the rest of its programs have joined the ACC.

In leaving the Pac-12, UCLA and USC are destabilizing a conference that has been fairly immune from the realignment that has washed over Division I athletics for the better part of the past two decades.

Known as the Pac-8 until 1978, when Arizona and Arizona State joined to form the Pac-10, the conference did not add members until 2010, when Colorado left the Big 12 and Utah left the Mountain West.

The Big Ten, meanwhile, has been growing steadily for the past three decades, following the addition of Penn State for the 1991-92 school year. Nebraska joined from the Big 12 in 2011, and the conference finally grew beyond its traditional Midwest footprint when Maryland and Rutgers were added in 2014.

It will become the first major Atlantic-to-Pacific conference, though it won't be the first to try. The Big East in 2011 voted to add San Diego State and Boise State as members before the schools that did not sponsor FBS football voted to break away from the conference, partly as a result of that move.